for some sexual language and thematic elements. 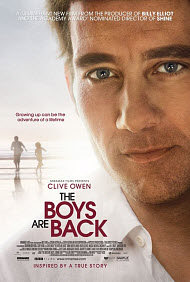 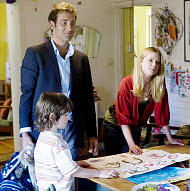 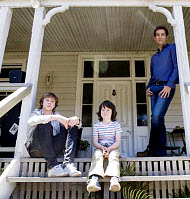 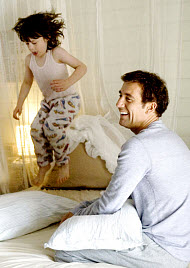 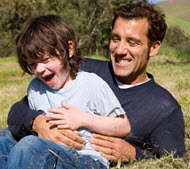 “Growing up can be the adventure of a lifetime”

“I think you’re making a big mistake,” Joe’s mother-in-law Barbara warns him as he makes plans for a road trip dragging along a six year old son he hardly knows.

“I’ve done it before” replies Joe. And thus, taking life by the hands becomes his creed embodied in the mantra “Just Say Yes.”

Director Scott Hicks (“Shine,” “Snow Falling on Cedars”) says he became interested in working on “The Boys Are Back” the moment he read the script, because he wanted to see things that he’d never seen before on the screen. When it comes to stories about single fathers raising their children, the material has been few and far between since Dustin Hoffman donned an apron and scorched French toast in “Kramer vs. Kramer” (1979).

Clive Owen plays Joe Warr, an enthusiastic sports reporter who works for an Australian newspaper that keeps him away from his wife and child for long stretches of time. After his wife passes away from a bout with cancer, he becomes a widower and a single parent to their six year-old son.

Joe attempts everything to build a relationship with a boy he hardly knows, and then, at last resort, decides to adopt a carefree attitude towards household rules. Rules where the word ‘no’ is hardly uttered. Joe isn’t necessarily permissive, he just allows his son a lot of room to grow up in.

Just as Joe is starting to bond well with his youngest son, he gets a call from Harry, a college-age son from a previous marriage. Harry is a bit unhappy about his mom’s new choice in boyfriend’s and plans a trip to Southern Australia to explore a relationship with his estranged father.

The performances of Joe’s two sons really bring a solid foundation to a film filled with great performances. Often times when directing a film dealing with the emotional complexities of young children (particularly really young children), novice director’s tend to try to squeeze sentimentalism out of the eyes of their young performers through rivers of tears. These two young actors easily maneuver among the wide range of emotions they feel towards a father they are just getting to know.

Nicholas McNaulty plays Joe’s youngest son, and his performance as a child dealing with the loss of his mother while getting to know his father for the first time is very dynamic. These characters are realistically drawn and their depth really adds a richness to the story. Clive Owen’s performance stands out and once again demonstrates why he is one of the best actors working today.

The most dynamic feature of the film is the character that has no words, but speaks very poetically. It is the lush hillsides and mountaintops of Southern Australia featured prominently in this film. The Australian board of tourism would be wise to adopt this film and use it to promote tourism to the beautiful wilderness captured.

One might think that with a premise of a single father raising two distant sons in an exotic location where there are very few boundaries, this would be the perfect set up for wild parties, frank discussions about sex, bonding over alcoholic beverages (with the oldest son), and an endless array of poop jokes and toilet humor (with the youngest son). Fortunately, there is little of the above mentioned. There are a couple parties, but they consist of the type with paper streamers, backyard games and hiding in dark corners.

There is a scene where the beach kids that Harry tries to befriend take over the house and wild partying ensues.

A scene where Joe points out the house rules to his oldest son turns into a rant of about a half dozen swear words after Joe explains to Harry that there is no swearing in the house, Joe finds them unimaginative. Most of the words Harry gets out are of the English variety and usually not viewed as offensive on this side of the pond. However, before he finishes, he does get out a couple offensive words and starts the mother of all swear words before Joe cuts him off mid utterance.

There are a couple other profane words here and there and two usages of God’s name said in vain. There is no sex or nudity. There is a brief fight in an English pub which amounts to the entirety of violence in the film.

It is quite refreshing to see a film marvelously dance on the precipice of melodrama without taking the plunge and becoming overly sentimental. The film is never predictable, and every time you believe it is going to fall into the realm of soppy sentimentality, it spins nicely in a different direction.

The film is inspired by a true story. With its vivid characters, great performances and unique story, you too might find yourself inspired by these three boys finding themselves in the breathtaking Australian outback.