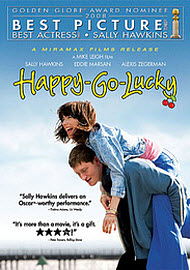 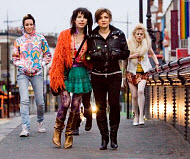 Warning: There are major plot spoilers in this review.

Director Mike Leigh’s most recent film is more of a character study than a story. It follows several events in the life of Poppy (Sally Hawkins), an elementary school teacher, whose strategy for dealing with life is to take the stance of happiness regardless of the circumstances around her. Think of “Happy-Go-Lucky” as a sort of secular version of Norman Vincent Peale’s The Power of Positive Thinking. The structure of the film is thematic, with each episode examining what happens as various people respond in various ways to Poppy’s insistent and persistent cheerfulness. Most, such as the book shop owner whose store Poppy visits in the film’s opener, find her disposition annoying, and whatever message a viewer derives from the film is probably dependant on whether or not one agrees with him (and Poppy’s acerbic driving instructor, Scott) or whether one sees a sort of nobility in Poppy’s attempts to meet the weight of Job with the wisdom of Pollyanna.

I didn’t see this film topping many (any?) end of year lists, but it sure felt like the film on all the lists that everyone was talking about. Of course, everyone is saying different things about it, which is what makes it so interesting. Thinking about “Happy-Go-Lucky” as a hot-button, provocative film is interesting, perhaps more interesting than the plot of the film itself, especially if your primary interest in film is in the narrative. People (at least the ones I’ve talked to) don’t seem to merely disagree about whether or not Poppy truly is happy; they seem to disagree passionately. Which leads me to the question of why we care so much whether Poppy is truly happy, passively-aggressively conflicting with those who aren’t, or just putting on a happy face for herself and remaining oblivious to how the world responds to her… For me, the answer is somewhat obviously the latter, and the real question becomes whether her ability to do so is healthy, unhealthy, or inconsequential.

If this argument is stacked, it may be because Scott, the antagonist who delivers the accusation that Poppy’s carefree attitude is calculated and contributes to his poisonous hatred of the world may be such a hostile and negative character that we reflexively go the other way just to disassociate ourselves from him. I’ve seen a lot of praise for Hawkins’s performance, and rightly so, but it is Eddie Marsan’s dead-on portrayal of habitual, toxic bitterness that creates the irresistible force to match Poppy’s immovable object on which the film truly depends.* His eventual explosion at Poppy is so obviously over the top, she is so obviously the convenient trigger rather than cause of his rage, that one can’t help but feel there could not possibly be even a seed of truth in his near-homicidal explosion of anger at Poppy.

No, there is not an actual homicide, but there is physical violence, and the threat of escalating violence in the final confrontation between Scott and Poppy is very real. Oddly then, I’ve been surprised at how many viewers I’ve spoken to profess to identify with Scott and take a certain measure of pleasure in the venting of his anger at Poppy. Perhaps there is something emotionally pornographic about depictions of anger and not just sex. That the threat of violence doesn’t come to fruition to the same degree it does in David Mamet’s “Oleanna” or Adriane Lyne’s “Fatal Attraction” doesn’t keep me from believing that this film, like those two (and, perhaps, Barry Levinson’s adaptation of Michael Crichton’s Disclosure) is as much about the venting of male rage at a world they feel is stacked against them than about the choices women make in the face of a raw deal.

A key difference, of course, is that the women that engender the rage in the earlier films participate in one degree or another in the humiliation of the men who finally strike out at them, which allows those films to couch themselves as revenge fantasies rather than misogynist ones. The woman is the symbol of his victimization not just the recipient of his wrath over it. In “Happy-Go-Lucky”, however, Scott’s rage clearly predates Poppy’s arrival on the scene; therefore, it strikes me as evident that his rage at her disposition is at least in part mixed with shame at his own realization that her conduct belies the flimsiness of the primary excuse rageaholics give to venting their anger—that it simply isn’t possible to control one’s disposition in the face of overwhelming circumstances.

That would suggest that the film is more on Poppy’s side than Scott’s, and I think it is. But I don’t think it is simplistic enough to suggest her response is a standard we should aspire to, that there is not something unsettlingly close to resignation in Poppy’s conduct. In that shade of difference between resignation and contentment lays the ocean between St. Paul saying he has learned to be content in all things and Dick Van Dyke (in “Bye Bye Birdie”) admonishing his fiancée (who actually has every right to be frustrated with him) to forget her troubles, come on and get happy.

Exhibit B in this argument is Poppy’s other male relationship in the film, with a young, handsome, male social worker who meets her because of her intercession on behalf of a troubled student and whisks her off to bed. Pay close attention to the morning after scene in which he expresses perfect contentment with living in the moment and is clearly thinking of their relationship exclusively in those terms. Is Poppy happier for having him in her life? Certainly, and his presence in her life is perhaps a reward meant to show that good karma comes around for those who refuse to give in to the self-fulfilling prophecy of bitterness.

Even so, I couldn’t shake the feeling that the film’s post-coda resolution, with Poppy and her friend in a rowboat on the lake literally going around in circles is dripping with irony. Perhaps it does not have the same hostile contempt that Poppy’s driving instructor has for her life, but it does (at least for me) still contain a strong whiff of, “If this is the life your philosophy has gotten you, what does that say for your philosophy?” Poppy is unquestionably happier than the habitually growling inhabitants of her circle, and if the film suggested that she was better off than she might be if she gave in to grousing, I could agree.

But—and this is a big “but” for me—there is a part of me that kept saying perhaps unhappiness is not always an inappropriate response to all situations. Just as physical pain makes Poppy seek out a doctor early in the film who treats the cause of her pain, so too can emotional pain and disappointment spur people to address the causes of their misery and perhaps have a better shot at true happiness. Narcotics are great for numbing pain and are sure as heck better than nothing when there is no alternative, but it is hard for me to see how any reading of the film that champions (rather than just sympathizes with) Poppy’s cheerfulness doesn’t eventually fall into the trap of assuming that true, deeper happiness is just an illusion and that the healthiest people are those who give over looking for it and settle for making the best of their solitary, poor, nasty, brutish and short existence.

Is it better to settle? Is having a relationship that is limited to the current moment with no promise of (nor impetus for) anything further better than being alone? It’s not that I think there is anything wrong with clinging to those pieces of good within a sea of bad. It may actually be noble. But is there not something wrong with saying “peace, peace” when there is no peace? So the question becomes, which is Poppy doing?

*Given that director Mike Leigh is rather famous for integrating extensive improvisation into his films, it is somewhat ironic that he was nominated for an Academy Award® for best writing, while Hawkins and Marsden were shut out of the acting categories. This nomination tells me that it is not just lay people or amateur film critics who have a hard time distinguishing the contributions of actor, director, writer, or cinematographer from one another and ought to be careful when opining about who should receive such awards.

Positive
Positive—Not a family movie, but definitely thought-provoking. Left me with lots of questions—What is happiness? What is the relationship between non-judgment of others and happiness? What the main character truly happy or was her happiness just a defense mechanism to somehow cope with the hard stuff of life? What is the root of anger? Does being “responsible” in like somehow militate against happiness? So… a good movie for discussion and reflection… and possible intesection with the themes of the Gospel. Speaking of the Gospel, I loves the climax of the scene between the main character where the driving instructor said he just wanted to “go home” and Poppy agreed that basically everyone does. Don’t we all yearn for that sense of heaven—to be home… ultimately be home with God?
My Ratings: Moral rating: Average / Moviemaking quality: 4½

Mark McConnell, age 43 (Canada)
Neutral
Neutral—This is a difficult movie to assess because it deals with various psychological levels. It starts as a story about an irresponsible and kooky young woman who wants to think life is fun all the time and imposes this worldview on everyone she meets. But there is much more development to her story than the reviewer seems to acknowledge. She learns that her methods do not work in this world. Her more serious side, which we see when she is teaching in her classroom, helps her grow up. Her driving instructor is unstable right from the start, so I personally did not find his violent outburst surprising, and I thought her reaction to him showed her emotional growth. Of course, there is the shallow and immoral dalliance with a young social worker, for which, and other similar reasons, I give this movie only a neutral recommendation. Nevertheless, it does a good job of showing someone learn, by necessity, to change.
My Ratings: Moral rating: Very Offensive / Moviemaking quality: 4½

Halyna Barannik, age 62 (USA)
Negative
Negative—I watched this movie with my wife and four children. I had read the average review on the movie, so decided it was fine. There was language I did not want to hear let alone my children. I also still am not sure if the main character likes men or woman. She mike actually like both. I found the movie to not be that well made. I recommend to stay away from this film I was very dissappointed that I watched this film.
My Ratings: Moral rating: Very Offensive / Moviemaking quality: 3