Noah’s Ark as shown in the movie,
The World That Perished

…the woman most responsible for the survival of the human race

Who was Mrs. Noah?

Mrs. Noah is undoubtedly one of the most significant women in Bible history—yet we have no record of her name. She is merely referred to as Noah’s wife the five times she is mentioned (6:18; 7:7, 13; 8:16, 18). What was she like? How did she live?

From a Different World

Her world was different from ours in many ways. Disease would have been less prevalent only about 1,600 years or so after the Fall (Genesis 3). We’ve had a few thousand more years for deterioration to occur, for example more bad mutations in us, and in viruses and bacteria. Apparently, the average man in Mrs. Noah’s day expected to become a father after he was a hundred years old, and to live more than 900 years. How long would women like Mrs. Noah have expected to be capable of child-bearing?

The fossil record shows larger animals and plants when compared to the same types found today. Is this why giants figure in children’s fairy-stories? And there were no racial problems because there were no races. Everyone spoke the same language (Genesis 11).

In many ways, however, Mrs. Noah’s world was similar to ours. Its population was swelling rapidly. Various estimates have been made from the genealogy in Chapter 5. A conservative calculation based on four children per family and 18 generations from creation to the Flood gives a population of about one billion. This is equal to the world population during the first half of the nineteenth century. Today the world population is about five times as large. This population may have been spread right around the globe, although we have no way of knowing for certain what the pre-Flood land area was like. It might have been one single land-mass (1:9).

Neither were they grunting cavemen, for they had developed many skills (Genesis 4). The first city was built by Adam’s son, Cain. By the seventh generation, there were shepherds, musical instruments—both wind and string-metallurgy (bronze and iron)—and poetry (by Lamech).

These people with such abilities were descended from Adam, who named the animals in one day (1:20), even before his wife was created to help him! This was before his intellect was spoiled by sin. Our intellects are no doubt considerably dulled by the ravages of sin. Contrary to popular opinion concerning those who lived so long ago, Mrs. Noah would have been far from primitive.

A Light in an Extremely Sinful World

Mrs. Noah knew her world was under God’s judgment. Her husband had told her that God planned to destroy the Earth with water because of its sin (6:13, 17). God also gave Noah specific directions for building an Ark (meaning “box”) to preserve his family and a pair of each air-breathing, land-dwelling member of the animal kingdom.

I think that Mrs. Noah would not have had a problem with this. She would have been well aware that her God had created her ancestor Eve to be Adam’s helper. The events of creation week and the details of her family tree were probably recorded on tablets which were later loaded on to the Ark.

She would have known that God revealed His commands to Adam before He gave him Eve to be his helper (2:15, 18). This man was responsible to God for himself and his wife. He was the one called to account when they disobeyed God even though she started it (3:9-12). Of course, God communicated with Eve as well, and Mrs. Noah had her own personal relationship with her Creator. It was just that this Creator relayed His instructions to His people via their leaders.

Mrs. Noah was not a nobody, but rather a real somebody fulfilling her feminine role. She obeyed God by submitting to her husband’s leadership. Noah, being a righteous man (6:9) would not have abused his position or corrupted it into tyranny. She faithfully helped Noah during several hundred years of farming (5:29), up to 120 years of boat-building, more than a year of zoo-keeping (under divine guidance) on an enormous houseboat, then during a few hundred years of farming with a side-line in wine-making (Genesis 9). She also supported him in his preaching ministry (2 Peter 2:5).

Nobody without faith could have done what she did. How otherwise could she have backed her husband in building a large ocean-going vessel to escape a flood when she had never even seen rain (2:5-6)? Without faith how could she have raised three sons with hammering in her ears as a constant reminder of the coming doom? Without faith how could she have stepped on the Ark and left nearly everything behind? She must have believed that God could and would save them as He had promised. She was probably aware that her husband was destined for a special service to God when she married him. Lamech had named Noah from a word meaning “rest” because God had revealed to him that this son would bring rest to God’s people (5:29).

Crucial to Mrs. Noah’s faith was the fact that her eyes had to be fixed on the world to come after the Flood. She lived and raised her family for more than half her life in a world she knew was doomed for destruction. She had to teach Shem, Ham and Japheth to live differently from their friends and to prepare themselves for this future world. She couldn’t allow herself or her family to become too attached to the temporary trappings around them. 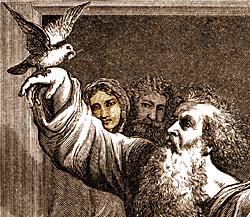 She must have fostered a very close family life. They had to be close because they had to move further and further away from the beliefs and practices of the people around them. They also had to prepare for a time when there wouldn’t be anyone else. During the long years of working and waiting she and Noah did have the support of believing members of their wider family circle.

There was paternal grandfather Lamech (not to be confused with the Lamech of Chapter 4) who died five years before the Flood and was great grandfather of Methuselah (the oldest man who ever lived—969 years) who survived till the year of the Flood. God had mercy on them in their old age and didn’t put them through the ordeal. Nor did he put babies or children or adolescents through it; he timed the arrival of offspring to fit in with His sovereign plan. Four married couples went through it—the senior pair to manage and the other three to multiply.

There must have been a sense in which Mrs. Noah was free from the bondage of other people’s opinions—free to obey God no matter what. She was the only believing female of her generation to board the Ark. There were only three in the next generation—the young women who became her son’s wives. Were they brought to faith by her husband’s preaching and her prayers? They were to have an absolutely crucial place in human history. From their descendants all the nations of the Earth originated (Genesis 10 and 11).

A Woman of Courage

What courage and determination she must have possessed to sustain her lonely position; to face the destruction of everything she knew. What spiritual strength would have been necessary to endure the hostility and ridicule. Nothing but sheer steel could have weathered the cries of those drowning. Great grace must have been granted for her to be shut in with seven others and many thousands of animals for more than a year. Only uncommon courage could face what she first viewed from the mountains of Ararat where the Ark lodged: the totally transformed world with its fossil reminders of death and destruction.

This woman a nobody? She must have been one of the greatest women who ever lived. It matters not that her name wasn’t recorded. She impacted the world’s history for ever.

How did she do it? She did it by being a godly wife and mother. She was married to a “savior,” Noah, who was used of God to save believers from physical death in the Flood and therefore the world’s population from extinction. Her oldest son, Shem, was the ancestor of the Jews. From this nation came Jesus, the incarnate Creator and Savior. By His death on the cross He gave salvation from spiritual death to all believers. He is the only One who can save us from everlasting destruction in Hell. He is the only One who can deliver us when our world is destroyed by fire (2 Peter 3:7). He has promised to come back and collect His own (2 Peter 3:4ff).