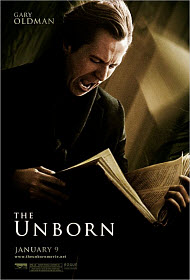 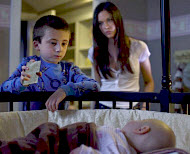 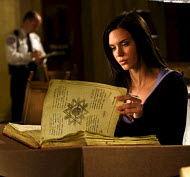 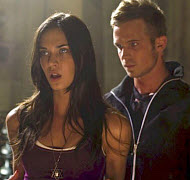 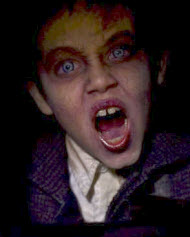 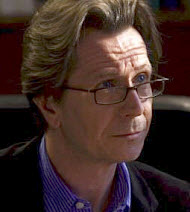 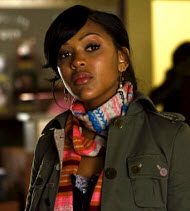 Do you understand God’s story? Did evil really exist before God?

Here’s what the distributor says about their film: “Sometimes the soul of a dead person has been so tainted with evil that it is denied entrance to heaven. It must endlessly wander the borderlands between worlds, desperately searching for a new body to inhabit. And sometimes it actually succeeds.

Writer/director David Goyer (‘Blade: Trinity,’ ‘The Invisible,’ ‘Batman Begins’) gives a terrifying glimpse into the life of the undead in ‘The Unborn,’ a supernatural thriller that follows a young woman pulled into a world of nightmares when a demonic spirit haunts her and threatens everyone she loves.

Casey Bell (Odette Yustman) hated her mother for leaving her as a child. But when inexplicable things start to happen, Casey begins to understand why she left. Plagued by merciless dreams and a tortured ghost that haunts her waking hours, she must turn to the only spirtual advisor, Sendak (Gary Oldman), who can make it stop.

With Sendak’s help, Casey uncovers the source of a family curse dating back to Nazi Germany—a creature with the ability to inhabit anyone or anything that is getting stronger with each possession. With the curse unleashed, her only chance at survival is to shut a doorway from beyond our world that has been pried open by someone who was never born.”

Neutral
Neutral—After viewing this movie early, I was surprised to see how it is not as bad as it is portrayed. That is if you don’t mind some violence. In short, the bad language is at a minimal, except for a few times near a heated scene. There is no sexual content, except for one time which I would hardly consider it sexual. Not to mention, God is referenced several times in the film in a good way! So I would give it the go ahead!
My Ratings: Moral rating: Better than Average / Moviemaking quality: 3½

Tom, age 45 (USA)
Negative
Negative—…If you are a Christian, you should not watch this. Some may justify this movie as saying that “god” prevails, but it is far from the truth. “God,” as they call him in this movie, is just a reference that all religions have the same “god” and that these evil spirits have been around since before religions where made. This is almost a word for word quote from the movie.

Excuse me, did they say that the word of “God” YAHWEH was made by man. Is that true? No Sir! And did they say that the evil (devil) was around before God. I think not! This movie basically is preaching that any religion has power, and that by vain repitition you can fight away evil. This message that this movie is trying to preach is straight from Hell. “No man can get to the Father, except for the Son” Jesus Christ.
My Ratings: Moral rating: Extremely Offensive / Moviemaking quality: none

Nates4Christ, age 21 (USA)
Comments from young people
Negative—I just want to say “The Unborn” is without a doubt the worst film I’ve ever seen. The movie’s approach wasn’t the usual blood and gore and violence that you would find yourself viewing in other horror movies such as “dawn of the dead, 28 days later” etc. it was a very psychological attack you could say with lack of a better description. The violence in this movie isn’t what scares you the most its the suspense and waiting for it to happen, and then when it happens it usually involves some demonic image screaming at you.

I thought to myself when I saw the preview that this movie would just be your average waste of time not scary horror movie I was wrong. I’m a bit of a “thrill seeker,” so I’m use to being “scared” but this was almost too much for me. In one scene I clenched my fist so tight it was almost bleeding. the only reason I stayed in the movie is because I thought good would triumph over evil… I was wrong. DO NOT BOTHER SEEING!!
My Ratings: Moral rating: Extremely Offensive / Moviemaking quality: 4

Tristan, age 17 (Australia)
Neutral—I have been raised in a Christian home and we talk about demonic possession, Satan, and exorcisms. Maybe this movie didn’t phase me because of that. Yes, I know these things are real. “The Unborn,” however, was just another lame teenage scary movie. It didn’t scare me as it was predictable, yes, maybe I jumped or screamed, but only from startlement. It was a fun movie to watch in a group of teenage friends. We talked through the whole thing, making comments on the actors, graphics, etc., we even laughed throughout the movie. Overall, it was just another “horror-flick”… nothing going down in history.
My Ratings: Moral rating: Better than Average / Moviemaking quality: 2

Rachael, age 16 (USA)
Movie Critics
…the movie is something of a snooze, a gabby PG-13 horror flick whose most shocking image might be the bored look on Gary Oldman’s face as he goes through the motions of playing the rabbi in charge of dispatching the film’s damnable demon to somewhere over hell’s rainbow. …

Claudia Puig, USA Today
…As gross—and as violent—as it is at times, “The Unborn” shuns hard-core horror, opting instead for random jump scenes and cringe-inducing head-spinning. That doesn’t mean it’s tolerable. …

Meredith Whitmore, PluggedIn
…If the use of Nazi atrocities as a MacGuffin for cheap thrills offends you, “The Unborn” isn’t your movie. If, however, you appreciate the sight of a half-naked beauty being terrorized by potato bugs, look no further. …