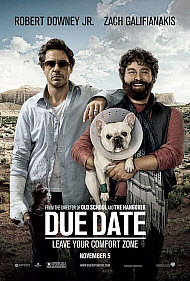 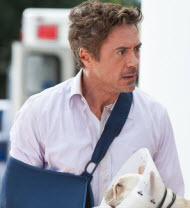 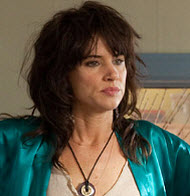 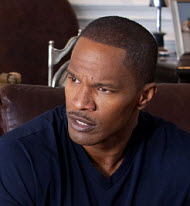 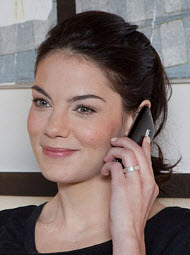 Question: What do you get when you cross “Lemony Snicket’s A Series of Unfortunate Events” with a not so funny version of “Planes, Trains, and Automobiles”? Answer: “Due Date.” This is a truly uninspired, sadistically humorous series of unfortunate vignettes glued together in a comedy that has lost its way—on its way—to nowhere.

For the record, it’s my first viewing of a Todd Phillips film (I am happy to announce) and, more than likely, it will be my last, unless there is some remarkable transformation in the future—as to his choice of scripts. That said, I can’t compare the film to any of his other commercial hits like “The Hangover,” “Old School,” or “Starsky and Hutch” in terms of his growth as a director or the humor he portrays. What I can do is examine his current film all by itself. Let me be clear, there’s not much here to be desired from a Christian perspective—if anything, but there is quite a bit to object to—on multiple levels.

I don’t remember why I submitted a request to review this film months ago, but I might not have been feeling well, at least that’s what I thought when I saw the first trailer a couple of months later. I knew it wasn’t going to be good. Let’s just call it “intuition.” And I was right. Many of the funny lines and antics were used in the trailer to lure in the potential audience, and once you paid your ticket price, you were finished. There wasn’t anything new.

The synopsis of this film is simple. It’s an unplanned road trip across the country between to men, thrown together by fate, each trying to get to Los Angeles for different reasons. Peter Highman (Robert Downey Jr.) the high-flying executive type is trying to get back to see the birth of his first child, while the delicate, trembling-like character Ethan Tremblay (Zach Galifianakis) is headed for Hollywood to get discovered. It’s a disaster from the get-go. Ethan’s character is reminiscent of Inspector Clouseau from “The Pink Panther” (now that’s a funny movie), where trouble seems to stalk him incessantly like a dark cloud, and woe be unto you if you get near that funnel. That was Peter Highman’s mistake, and within minutes of the opening of the film they are both put on the “no fly” list and have to find their way to California with an alternate form of transportation. So we move from planes to a rent-a-car parking lot, where Peter surrenders to Ethan’s invitation for a ride to LA. Since Peter’s luggage and wallet are missing, and he is desperate—with few choices remaining to try and reach his wife before the baby is born—the adventure begins.

The rest of the film is, as I’ve already stated, a series of unfortunate events. When you put these two stubborn, self-centered characters together in a car with a mission—get to Los Angeles “on time”—at any cost—the Steve Martin-John Candy duo comes to mind from their aforementioned hit in the 1980’s—with a touch of Oscar-Felix (“The Odd Couple”) antics. One of the many problems with these characters is they are both so insensitive and self-absorbed, that we don’t really care about either one of them, or whether or not they survive their ordeal. My thought throughout much of the film was: what genre is this trying to be? At times, I thought it was a black comedy, and gave it lots of room, and then it would shift radically (not in a good way) and look like a warm and fuzzy version of “Little Miss Sunshine.” Then, with little notice, I felt transported into a different movie—like Cheech and Chong meets “Fast and Furious” or “Speed II”. It was like watching a “train wreck” on screen. There we have it: Planes, automobiles and “the train.”

Finally, one of the most disturbing things about this film was the entire subplot around the supposed medical-use marijuana that Ethan allegedly needed for his glaucoma. Essentially, it was a giant “product placement” that was beyond distracting. This is not the first time that I’ve seen this done recently, as I noted in my review of “It’s Complicated,” a film of a completely different genre, where the promotion of recreational drug use was more subtle, but evident nonetheless.

Besides the marijuana promotion, there are countless uses of the “f” word or variations thereof including “mother f-er.” On my mini-pad, I scribbled down (in the dark) more than 40 tally marks by that word alone. There were, also, at least 8 uses of the “s” word, about 15 times where God is used in vain, with one time noted that included “G-d da_n.” There was one reference to Christ’s name in vain and a scattering of other profanities like, “son of a b_tch”, “a_s”, “ti_s,” to name a few. This film earned its “R” rating on language alone.

That leads to the concern I alluded to in my opening sentences about sadistic humor. I don’t get it. There are some serious violent acts taking place in this film that are caught in between black comedy and realism, and they are not funny—not the least of which is Peter punching a minor child in the gut and threatening him not to report it to his mother, indirectly. There is a point in the film, after they make some progress in their relationship mishaps, where Peter threatens Ethan with, “If I miss the birth of my own child, I’m gonna choke you out with your own scarf. Wrap that thing round your head and choke you out! Ethan’s response was, “Sounds a bit… drastic.” If this film sounds a bit drastic, it’s because it is… lots of cheap laughs at the expense of others’ pain.

With all the negatives I have outlined, I would be remiss in not pointing out the few qualities that made the movie almost tolerable. First is the importance of caring and loyalty, in addition to family, that rides beneath the surface of the entire script, which really should be considered normal, and not something one should have to search for. I guess you could say it indirectly supports family values. Second are the outstanding performances by Downey and Galifianakis who bring these unlikely characters to life with this over-the-top script. There is a surprisingly touching moment now and then, truly genuine (when it felt like I was watching “Little Miss Sunshine”) which tipped the scales away from a total bomb. Robert Downey Jr.’s revelation about his childhood memory of his father is a powerfully dramatic piece of cinema, but it is eclipsed by the actions and shenanigans that prevail throughout the film. Finally, there are some admittedly funny lines which gave me almost a sense of guilty pleasure. My personal favorite: “Dad… you were like a father to me.”

In short, when the credits rolled, I felt the same way about this film that I did about the final episode of “Seinfeld”—when the four lead characters ended up in jail. Who cares? The funny four of “Seinfeld” reaped what they sowed, and it was hard to feel anything for them. I felt the same way for Highman and Tremblay. I suppose one could argue that some sort of transformation takes place between these two men, one that shows growth in their interpersonal relationships—but at whose expense, and at what cost? In the end, they are still lost, and quickly on the road to nowhere.

Positive
Positive—I just saw this movie with my 19 year old daughter tonight. We laughed the ENTIRE movie! It was an excellent movie. We were laughing so hard sometimes we couldn’t stop ourselves. The entire audience was laughing through the whole movie, also.

The only bad part in the car lasted about 5-10 seconds, and it was actually funny. You couldn’t see anything. Yes, there were some bad words, but you don’t notice it much. This was a very funny movie. We almost didn’t go see this movie because of the review we read here. We are glad we trusted our own judgment. It was very refreshing not to see half naked women for a change.
My Ratings: Moral rating: Better than Average / Moviemaking quality: 5

Negative
Negative—My advice on the movie “Due Date” is don’t DO! For Safe Movie Watching, practice abstinence from this movie. My wife and I, both 51, took a chance on seeing this without there being any Viewer Reviews posted in advance. We live in Mumbai, India, and since only one English movie comes out weekly, we don’t have many options. We were attracted to the actor line-up and the story-line, but unfortunately it fell far short in both categories.

Repeated use of the “F” word was doubly bad because we had to not only hear it, but also see it in the subtitles (over and over and over and over). The subject matter in the male bonding vignettes was total trash and the heavy product endorsement was too blatantly obvious. The only redeeming factor was that, in India, there is an intermission which allowed us to escape the “womb” without walking all over everyone. It may have been premature but a relief not to have to endure any more painfully belaboring cinema poorly delivered as entertainment. What is wrong with Hollywood?
My Ratings: Moral rating: Extremely Offensive / Moviemaking quality: 3

Overall, it was base, gross and lacked any feel-good factor that you’d expect from a comedy. I had expected so much more from R.D.J., who I think showed very poor taste in going through with this film, and as an actor I was previously happy to watch, I will no longer be attending his films, as he has used his gifts in an offensive way to gain money.
My Ratings: Moral rating: Very Offensive / Moviemaking quality: 4

Ross, age 54 (Great Britain)
Negative—I WISH I would have NOT seen this movie. I can’t believe how much of the f-word was used, there were drugs (smoking pot quite a few times), masturbation and just a negative feel to the whole thing. I was never going to watch this then a friend saw it and said it was funny and pretty clean. NO IT was NOT clean. Ironically when they watched it with me, they said they didn’t remember that many F bombs in it. Don’t waste your time, its NOT worth your valuable two hours of your life.
My Ratings: Moral rating: Extremely Offensive / Moviemaking quality: 2

Samantha, age 36 (USA)
Comments from young people
Negative—Definitely a movie to stay away from. The humor was immature and offensive. I laughed during the movie, but, looking back, it’s not that funny anymore.
My Ratings: Moral rating: Extremely Offensive / Moviemaking quality: ½