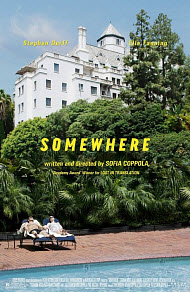 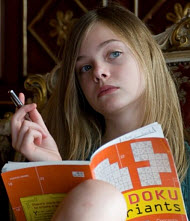 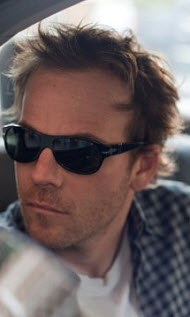 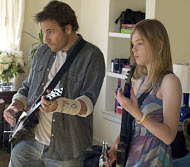 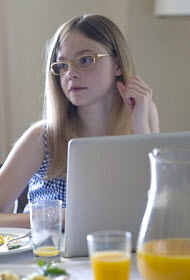 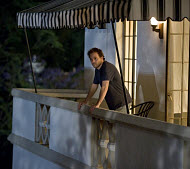 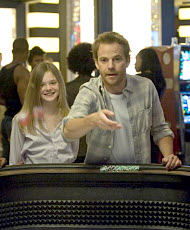 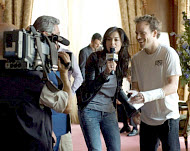 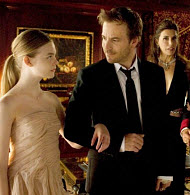 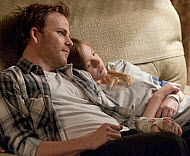 Johnny Marco (Stephen Dorff) is a well known actor. Having achieved moderate wealth and status seems to have done nothing for him. Aside from drug use, liquor and random sexual encounters, he finds himself completely void of any real challenge or purpose. When his daughter Cleo (Elle Fanning) surprises him with a long term visit, Johnny finds himself feeling more alive than he has in a long time…

I wish there was more that I could say about this movie. I wish the story had more depth and loveliness, but the truth is that it was pretty difficult to surmise the above plot from this film.

Where to begin? Quality, technical execution and overall film production aside, this movie is riddled with offensiveness… There are several instances of female nudity; a few sex scenes, both on screen and off screen, complete with sound effects; there is drug and alcohol abuse; inappropriate dialogue around a child; profanities…

Technically speaking, “Somewhere” is easily one of the worst films I’ve ever seen. Long, awkward scenes that end of completely irrelevant. An out of place soundtrack, with lazily edited tracks or long stretches of complete silence. Overall, there is not one single thing that I found moderately effective or redemptive about this film, though I kept hoping there would be. After the longest almost two hours I have experienced in a long time, the group of people that I viewed this film with were only left feeling uncomfortable and thoroughly confused.

Positive—I’m surprised on how quick and shallow the review is for this subtle, minimalist yet unconventional film by Sofia Coppola. …When watching the film, do not have any expectations of what you think the film will or should be. It is not the typical mainstream Hollywood film where there is an obvious straightforward plot. “Somewhere” is a film that mimics real life, without any over exaggerations or unrealistic drama.

The plot centers on Johnny, a celebrity actor who, despite being able to have multiple affairs with any woman he wants and a successful career, is overcome with boredom and sadness for his seemingly meaningless life. That is until his daughter comes for a surprise visit. As he spends time with her, he realizes that being a father is what will make him truly happy. Although many people like to think of a celebrity’s life as glamorous and always fun, the movie depicts the other side of celebrity, specifically the loneliness, sadness, and difficulty with connecting to people, especially family.

Many scenes, though realistic, have symbolic meaning. One example is a scene where the main character is getting plaster on his face for a mask. While the character is covered with plaster and left alone by the special effects artists, the camera slowly zooms in, creating a claustrophobic feeling to symbolize the character’s suffocating isolation he had created for himself.

What is hard in viewing the film, is the fact that it centers on a specific point of view that many may not be able to relate. I think one of the main goals of the film is to show the beauty in the simple things in life. Many scenes show the father and daughter bonding by doing ordinary things like swimming or playing a video game. Although it doesn’t seem very meaningful to us, to the characters, it is everything. You soon realize that not only is Johnny’s life lonely, but due to his busy schedule and his ex-wife’s desire to get away from everything, his daughter is lonely, too. She is devoid of a meaningful relationship with her parents, due to their choices.

Morally, the film is not appropriate for children or immature teens. There’s nudity, adultery, and bad language throughout. The film can be offensive, though many of the immoral choices are there to show a realistic portrayal of the sadness and meaningless of Johnny’s life. In my opinion, this is not Sofia Coppola’s finest film, for I think “Lost in Translation” is her best. If you approach the film like you would a short story, I think you will have a better viewing experience, due to the unconventional style.

Overall, if you like simple and quiet films, give it a try, you may really like despite the many bad reviews this film has undeservedly received.
My Ratings: Moral rating: Very Offensive / Moviemaking quality: 3½


PLEASE share your observations and insights to be posted here.