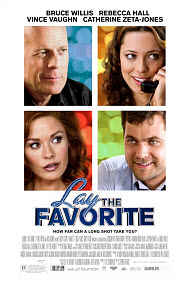 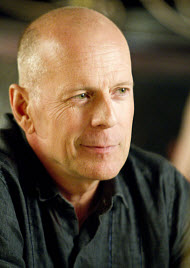 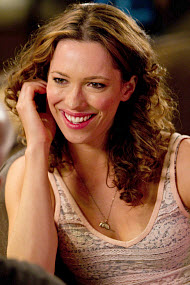 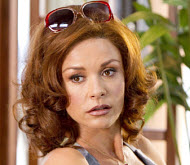 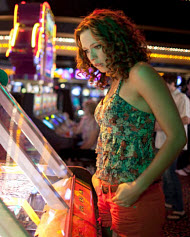 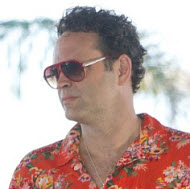 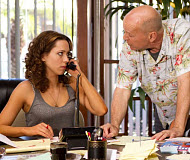 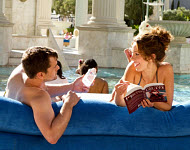 “How far can a long shot take you?”

Here’s what the distributor says about their film: “Beth Raymer (Rebecca Hall) leaves her dancing job at a Florida strip club to become a Las Vegas cocktail waitress. Not exactly an ideal career choice, but she believes her borderline-ditzy personality doesn’t give her many options. In walks Dink, a professional sports bettor who sees through her bubbly exterior and offers her a job placing wagers all over town to gain an advantage over the casinos. Her surprisingly impeccable mind for numbers soon cements her status as Dink’s good-luck charm, until his gorgeous-but-frigid wife, Tulip, starts to get jealous.

Based on a true story, ‘Lay the Favorite’ is a heartfelt comedy of finding friendship in the least likely places.

Set in the wild, extremely funny and lightning-paced world of legal—and illegal—sports gambling, ‘Lay the Favorite’ follows unpredictable dreamer Beth as she goes from in-home stripper in Tallahassee to gambler’s assistant in Las Vegas, working for Dink, one of the most successful gamblers in the business.

She takes to the work like a natural, but makes the risky bet to fall for Dink, much to the chagrin of his retired showgirl wife, Tulip.

That bet goes South, and a triangular war ensues.

Faced with no other choice but to fire Beth, Dink’s luck runs out when she heads to New York to work for a smarmy bookie, a turn of events that lands her squarely on the wrong side of the law. Against Dink’s protests, Beth goes to work for the flamboyant, unstable Rosie who runs a less-than-legal operation in NYC, then for his doomed hyper-speed online sportsbook in the betting Babylon of Curacao. When Beth’s risky gambles result in her innocent boyfriend threatened with prison, she must reunite with Dink, face up to the fearsome Tulip, risk jail, and return to NYC to confront her responsibilities. Can she beat the odds and win the day?”

Betsy Sharkey, Los Angeles Times
…the movie is a bust, and, as usual in these situations, it is easier to say how than why, and best to say as little as possible, cut one’s losses and move on. …

A.O. Scott, The New York Times
…Hollywood celebrities romping around in a candy-colored Alexa-shot criminal underworld, pretty much as a means of passing time. “Lay the Favorite” is obviously worse than it should be, but it’s also a thinner and more pallid experience than it would have been if it were a total catastrophe—if it had any ambition. … [1/4]

Justin Chang, Variety
…though the story falls a little flat, the script is sprinkled with dry wit. … [2½/4]

Kyle Smith, New York Post
…This true-life gambling world tale can’t cash in all its chips. … The overall tendency toward shrillness distracts from the characterizations and puts a damper on much of the potential comedy. …