for nudity and brief language 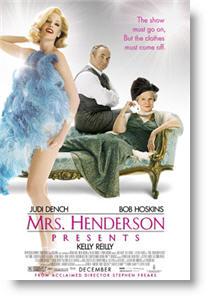 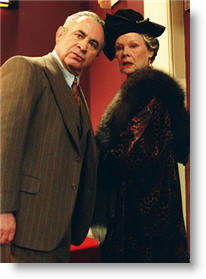 “The show must go on, but the clothes must come off.”

An aristocratic widow (Judi Dench as Laura Henderson) buys an abandoned London theater. With the help of an experienced theater manager (Bob Hoskins as Vivian Van Damm), she gains success by revamping the theater and staging around-the-clock, nude, musical revues.

Laura Henderson is whatused to be called an aesthete—a lover of beauty. Is that why she uses her family connections and influence to get government approval to include nude tableaus in her theater’s musical numbers? There is no definitive answer to that question. Indeed the film’s lack of concern with providing a single, simple answer to Henderson’s motivation is part of its comedic charm. If you need a serious justification, the film will throw you Laura’s final speech like a bone, allowing you to believe there is something high-minded and culturally significant in the success of the Windmill’s sexual shenanigans.

In an American film, Mrs. Henderson’s climactic speech would serve as the big reveal, pulling back the curtain on the character’s psyche in order to patly explain everything. Dench is too rich a performer and the film too intelligent to think its viewers would totally buy or fall for Laura’s sentimental evocation of her dead son’s sexual innocence and her performers’ altruistic service to the lads of (and in) London.

Mrs. Henderson is a bit of a performer herself, so when Dench pulls back just a bit in this most actorly of moments, we understand that it is the sincerity of her emotions that keeps the showwoman in check. It’s the nature of performers, though, that they can’t pass up what Mrs. Henderson would call a “delicious” moment, and it is clear that she is also savoring her own moment in the spotlight.

Mrs. Henderson is also a businesswoman. She wants nudes on stage because the other theaters are closing and she risks losing her investment if she can’t keep her doors open.

She’s also bored. Like a later day Emma Woodhouse, she faces a society that severely limits the acceptable diversions for females of respectable station. The film opens with a funeral and the grave that Mrs. Henderson is looking into casts as long a shadow over her motivations as the tombstone of her son that she ponders at various intervals. Her unwillingness to buy hats and shoes and play bridge and shuffle politely and discreetly into her own grave is meant to make us look more indulgently at her pushing of social boundaries than we would at the same behavior form someone half her age. Age, like rank, has its privileges, and life, as the Bonnie Raitt song goes, gets mighty precious when there is less of it to waste.

“Mrs. Henderson Presents” effectively inoculates itself from any complaints about nudity by incorporating them into the satirized substance of the film. Laura plies the government licensing censor with cheese and wine as he formulates some intellectual rationalization that non-moving stage nudes are no different from art.

This scene, like the film, operates on several levels. There are kernels of truth to what he says, but we also understand that these can just be rationalizations, especially when we see the leering faces in the audience gradually replace those of bewildered theatrical patrons. The wine and the food, though, on a finely sculpted lawn, in the shadow of a giant mansion, invite us to ask a deeper question—why are some sensual pleasures (food, drink, the feel of fine clothes) socially acceptable, while others carry the stigma of vice? Because some are more dangerous or damaging than others? Perhaps, if you like. As I pondered that question, though, I couldn’t help but think of Tony Takitani’s wife, whose sensualist nature was first satiated and then overwhelmed by a love of fine clothes.

Contemporary American culture, with its bizarre, polarized contrasts between our puritanical past and our hedonistic, sex saturated present, stands in dire need of a nuanced, intelligent, theological examination of the role of pleasure in our lives. I’m not saying this movie is it, but I do give it credit for avoiding oversimplified, knee-jerk responses on either side of a subject.

I also liked that the film did not idealize Mrs. Henderson. Yes, she becomes a bit of a mother figure to the girls in her show, and yes, the film is tonally and structurally on her side of the cultural argument that the risk of the risqu is a small price to pay to preserve the joy of beauty in the world. But the film also shows her love of beauty leading her astray, causing her to make false deductions and conclusions because she has been prevented by her own aesthetic blinders from seeing the darker, harder sides of life that are plain to others. The film approves of her life philosophy, but it recognizes that there are ways in which that philosophy can hurt herself and others, and it doesn’t undercut that hard lesson with a cheap redemptive act or escape from consequences.

All of which makes “Mrs. Henderson Presents” sound far more serious and less funny than it is. Dench is one of our screen treasures and seeing her fire on all cylinders with Hoskins matching her step for step brings its own kind of aesthetic joy. These performances reminded me of the collaboration of Evelyn Glennie and Fred Firth in “Touch the Sound”, each artist instinctively anticipating the others’ notes and using his or her own performance to draw out and accentuate the partner’s.

Of course, there is the matter of all those breasts—and even a few testicles—on display. If they are criteria for automatic disqualification, I doubt the film will interest you.

Positive—…Cute movie… if you like drawn out British satire and humor. As for Christian values, there aren’t many. It’s a movie about a woman that loses her husband and buys an old theater, hires “the best in the business” to run it, all goes well for a while—then their style gets copied and they have to change. Funny dialogue, great acting (yeah, it’s harmless… and there is some nudity)
My Ratings: Better than Average / 5