for some thematic elements and language. 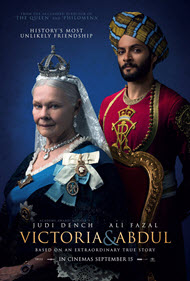 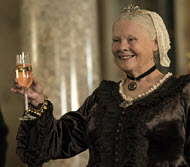 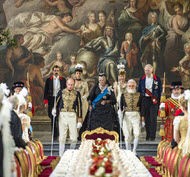 RACISM—What are the consequences of RACIAL PREJUDICE and false beliefs about the origin of races? Answer 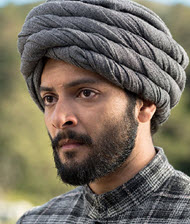 How does the Qur’an compare to the Book of Genesis on the great events of history—Creation, Fall, Flood and confusion of languages? Answer 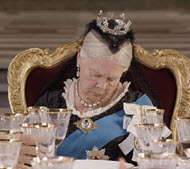 Kings and Queens of the Bible 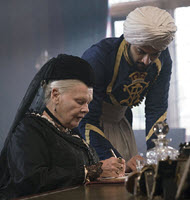 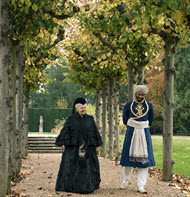 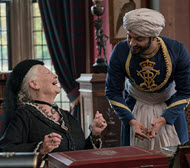 “Victoria and Abdul” is a biographical comedic drama based on the book of same name by Shrabani Basu, and on the actual relationship between Queen Victoria of Britain (played by Judi Dench) and her Indian Muslim servant Abdul Karim (played by Ali Fazal). It is based on a story that author Basu stumbled upon and subsequently led him to write a book.

The story begins in 1887, as Abdul travels from India to Britain to present the Queen with a ceremonial coin as part of the Queen’s Golden Jubilee. Evidently, Abdul is chosen for the job because he is the tallest man at his company. His associate Mohammed (played by Adeel Akhtar) also accompanies him to England. Abdul is excited about the assignment, and considers it to be an adventure, but Mohammed wants to complete the task as quickly as possible, and return to India.

Upon arrival at Windsor Castle, the Indian men are given strict instructions not to look at the Queen while presenting her with a ceremonial coin. However, Abdul respectfully bows to the queen and kisses her feet. The queen notices that he is handsome, and begins talking with him. Later, the queen summons Abdul, and he shares about the Taj Mahal, Indian curries and spices, and culture of India. The Queen is astonished. Britain has control over India, but she knows little about the country and their way of life. Queen Victoria has never been to India, because there was a fatwa (i.e., religious decree) against her, and her life would be in danger there.

Soon, Queen Victoria promotes Abdul to “Munshi,” which is the Urdu word for teacher. He begins teaching her how to read and write in Urdu. It is quite challenging for the Queen to write using this mysterious Arabic alphabet. Abdul begins by teaching her with a simple phrase, “I am the Queen.”

The Queen opens up to Abdul and admits that she misses her husband who passed away. She is hated by millions, and her children are at odds with each other. She has a horrible relationship with her son Bertie (played by Eddie Izzard) who is next in line to become king.

Abdul reminds the Queen that she is here for a purpose, and her mission in life is to serve others. Yes, even though Queen Victoria is waited on hand and foot, she must strive to be of service to others.

As part of the royal entourage, Abdul accompanies the Queen to Scotland, and later to Florence, Italy. They return to Osbourne House, which is Queen Victoria’s family home and seaside residence.

Interestingly, each location has a completely different architecture and feel. At the Scottish Highlands, they experience strong gusty winds and everything seems miserable. Even so, Abdul is delighted and amazed by the Scottish Highlands, and marvels how it’s a rare journey and how extraordinary it is to have made it in the company of the Queen.

The Queen gives Abdul a gold locket with a photo of herself. An odd friendship develops between them. He is 24 years old, and she is old enough to be his grandmother (around 80). They hold hands, and sometimes dance a waltz together. They talk about personal matters. But that’s as far as their relationship goes.

Finally, Abdul tells the Queen, “I love you more than I love my wife!” Astonished, the Queen wasn’t aware that he had a wife. She immediately sends for Abdul’s wife and mother-in-law to come to Winsor Castle. In a scene that’s almost funny, the women arrive in black Muslim garb, covered from head to toe. It’s funny because there could be anyone under that costume. The royal family and staff have never seen anything like that before. However, Queen Victoria considers the women to be exquisite, and Abdul’s wife humbly unwraps her head covering to reveal her face to the Queen.

The Queen is so obsessed with Abdul that she respects his opinion more than that of her son and staff. They become increasingly jealous of Abdul, and accuse him of jockeying for position and favor of the court. Abdul has upset the order of things. He is bullied and scorned.

The Queen’s son Bertie gives her an ultimatum: End your relationship with Abdul, or we will sign papers for you to be considered legally insane and unfit to reign the throne.

The movie allows the audience to see a wealth of detail, including the interior of the royal home, epic landscapes, and lavish costumes. Judi Dench plays her part well, embodying the stature, pride, probing intelligence, wit and fragility of the “Grandmother of Europe.” There is seriousness at her core, but she has a deadpan manner that she sustains through the humorous scenes. Actor Ali Fazal also offers a superb performance as Abdul.

Without giving too much away, the movie’s ending is a little depressing. Queen Victoria has a small crucifix above her bed, yet she knows nothing about repentance and faith in Christ—despite being “Defender of the Faith and Supreme Governor of the Church [of England].” She is quick to embrace what Abdul tells her about the Islamic religion, apparently because she is bored with her life and desperately lonely.

Indirectly, the movie points out that absolute power corrupts absolutely. The royal family is consumed with greed and lust for power. That’s why their family dynamics are dysfunctional, and they can’t seem to get along with each other.

On the positive side, “Victoria and Abdul” tells a story that was overlooked by British historians, because the evidence was destroyed in a fire. It was writer Basu who stumbled upon this story when researching a book in 2001. He found historical proof of their relationship, including paintings and sculptures displayed in the queen’s residence, plus Abdul’s diary and books from the Queen written in Urdu.


This movie claims to be a true account. But, once again a biographic film mixes fiction with fact without warning viewers. It is apparent that some historical revisionism, stereotyping, political correctness, and Progressive Liberal views of multiculturalism are in play. In addition, even secular critics have noticed the film’s strong favoring of Islam, as represented by the Abdul character. How wonderful, wise and progressive Islam seems.

Also, according to records, Abdul was not the humble man depicted in the movie, but increasingly arrogant, and frequently asked the Queen for special favors, including repeatedly trying to convince her to honor him with knighthood. Some of the Urdu phrases the real Abdul taught her included: “You will miss the munshi very much,” and “Hold me tight.”

So how much of this film represents reality? 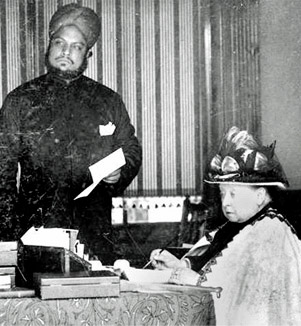 Here’s a photo of the real Abdul and Queen Victoria. How much do you suppose either person was really like the actors’ portrayals? I suspect there is quite a difference.

The Bible remind us,

Positive
Positive—This was an enjoyable, generally humorous movie. The cinematography was lovely, and the script was uplifting. The profanity was minor, by Hollywood standards (we didn’t hear the F-word noted above) and is usually inserted as comic relief. There is no significant violence or nudity, but children below mid-teens might be bored.
My Ratings: Moral rating: Better than Average / Moviemaking quality: 4

Brian Schacht, age 70 (Canada)
Negative
Negative—Underwhelming. Strange tone. It opens by saying “Based on actual events… mostly.” Most of the scenes are played very over the top and light-hearted, but there are a couple of heavier, meaner scenes that still have a whimsical soundtrack playing behind them.

It is more of a movie about the staff wanting to get rid of Abdul than anything else. And we didn’t really learn much about him, so there was no connection for me. It’s basically a vehicle for Judi Dench to be her most Judi Dench-like. She’s good. The movie really isn’t.
Jonathan Rodriguez (USA)
Negative—I always check Christian Answers’ Web site before I recommend a movie to my family, and once again, the site is proven right to give a warning for sugar-coated poison that currently Hollywood is presenting. Here in India, we are appalled by this liberal nonsense presented as historical facts. The purpose is clear, to portray Islam as moderate and Muslims with a saintly attire. Even though, India has a lot of Muslims, and we know the history very well, this film is pure fiction, the screenwriter’s wishful thinking out of a small historical incident. In reality, Abdul was not a compassionate and honourable man, he hated Christians, but acted as a faithful servant of the British and considered the queen as an infidel, though he claimed to consider her as a friend.

In his letter to his family, he hoped by convert the royals to Islam. The screenwriters and the author never presented any of these. Abdul Karim was known as a “munshi” which means teacher, and he wanted to present Islam as a vision to the world. Though, the queen has maternal affection for him, she resisted the Islamic agenda, which delayed his return, and his family was quite upset by it, and his affiliation to the infidels.

Hollywood just conjure up a fantasy to present this politically correct world, for favouring Islamic migration to the West, supporting cultural cultural Marxism, and ultimately destroying the Judeo-Christian ideals for Islamic propaganda. Remember, the movie is produced by BBC, which is strongly pro-Muslim and anti-Christian in their biased broadcasting.

It’s sad in India, we can see what Hollywood is doing, and in the West people consider these film as humourous and innocent. But always claim, who we are to judge, but it’s the good men’s silence which is detestable and a crime of the worst kind. Boycott these kind of propaganda films presented as historical truth! God bless.
My Ratings: Moral rating: Very Offensive / Moviemaking quality: 4

Movie Critics
…“Victoria & Abdul” explores colonialism and Islamophobia…
Karen Grigsby Bates, NPR
…“Victoria & Abdul” is worth seeing for Dench’s magisterial performance and for Frears’s light but sure directorial touch. Just don’t mistake it for actual history. …
Christopher Orr, The Atlantic
…In the shift from comedy to drama the movie goes wobbly. The narrative of cross-cultural understanding by way of individual affinity is a comforting but ultimately dubious one. …
Glenn Kenny, The New York Times
…this fascinating real-life tale is reduced to biscuit-tin proportions… The film also ascribes her some fairly improbable progressive views. … [3/5]
Robbie Collin, The Telegraph [UK]
…a moving account of an isolated old woman finding joy and lightness in her final years… The Judi show, minus punch, but that won’t bother the target audience. …
David Rooney, The Hollywood Reporter
…Judi Dench is wonderful in shallow “Victoria and Abdul”… Dench plays Victoria as voraciously curious…
Bill Goodykoontz, The Arizona Republic