Sammy and Rosie Get Laid 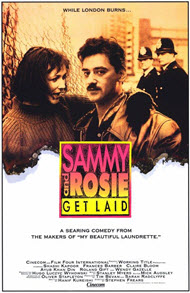 How can I know what is RIGHT and WRONG? Answer

How can I discern whether a particular activity is WRONG? Answer

What is THE FEAR OF THE LORD? Answer

“Sammy and Rosie Get Laid” is an interesting movie. It can probably be classified under the “fabliau” genre of Geoffrey Chaucer’s day, a rapid-paced story that is amoral or immoral in its theme.

This film is about the affirmation of the “human spirit,” the freedom to choose sexual, political, and societal conditions. The subduing of this so called freedom by any moral/political framework is flatly rejected throughout the movie. This type of mentality has been termed the “Postmodern condition;” it is the rejection of any moral and political parameters, and the rejection of all that has been passed down through the ages.

Jean-Francois Lyotard called it “the waging of war against totality and absolutism” and “all that has been received… must be suspected.”

This type of thinking and mental framework proves to be devastating to the characters in the film, and to those who espouse this in reality. Several observations can be made from this film to illustrate the types of consequences involved:

First, there are no principles of morality or moral parameters. The main protagonists, Sammy and Rosie, have a marriage that they have deregulated and desecrated. Their marital infidelity is condoned; Sammy and Rosie encourage each other’s extra marital sexual liaison(s).

What happens is that any parameters placed on marriage, either by Christian or Political means, are rejected for the obvious reasons of sexual gratification and selfish motives. Instead, the main characters herald preferences as the key to a happy marriage. In other words, truth is what you prefer, not what is objectively true.

The consequences from these actions have devastating effects: overt lesbianism, militant feminism, and avid sexual exploitation. Ravi, Sammy’s father, commits suicide as a result of finding himself living in a land that seeks to destroy everything he has stood for. One of the most shocking things is that his death is not clearly mourned. Sammy and Rosie are seen crying in the scene, but it is marred with ambiguity; are they crying over his death, or are these tears of joy?

Other characters who are part of this scene express their happiness at the news of his death. Whatever the case, they are now free to practice their lifestyle without him acting as a mirror of judgment.

Ravi is not perfect either, it is learned that his involvement in the British colonization of India was brutal; he was apparently involved in inhumane acts in order to sell the colonial occupation of imperial Britain. However, Ravi seeks to make a change, and asks for forgiveness from his son Sammy, who has rejected his father’s lifestyle since childhood. In tangible ways, Ravi seeks to reconcile with his son, and make amends for the things he has done. He is rejected, and begins to look forward to his eventual death.

It is interesting that the human frailties of people are lauded, but when someone wants to admit those frailties and seek forgiveness, they are ostracized. Since Ravi represents Christian influence through the image of British colonialism, it clearly alludes to the rejection of Christian principles, such as forgiveness, reconciliation, morality, and accountability.

Secondly, semantic problems, another aspect of postmodernism, are consistent in the dialogues amongst characters. Rosie tells the character Danny, who for some strange reason likes to be called Victoria, that “a kiss is not just a kiss, it could mean different things.” Again, everything is questioned; what is a relationship?; depending on the type of kisses, some extra marital affairs are fine. It also questions the aspects of biblical marriage consisting of one man and one woman. Two men or two women etc., are acceptable according to Rosie’s type of thinking.

Finally, the most ironic aspect of this film is that it proves how devastating human choices can be. The biblical principle of sin and consequence is poignantly displayed, probably unknowingly to the director and producer. The characters make serious choices that end up devaluing human life and even death.

Some choices seem to imply the need for immorality in society, one critic noted: “Sammy and Rosie Get Laid is a biting satire that does its best to achieve… [the] aim to get as much filth and anarchy into the cinema as possible” (TV Guide Online). Clearly, this is a film that seeks to deride any sense of moral obligation, and parade the ideas of sexual and political anarchy.

This film subverts the seriousness of human choice repackaging it as the idea of “human spirit.” Unfortunately, these choices do have consequences on individuals and society.

This film is not something that is palatable for the true believer in Christ; it is grossly immoral and indicative of what society has become as a result of rejecting God. As Christians, we need to be aware of these types of films which strive to pronounce the godhood of humanity, and the lie of freedom without God. We need to be certain of our responsibility of being salt and light to the world.

…Sammy and Rosie do get laid—by each other, by various friends and (the movie implies) by the system itself…

Ebert, Suntimes
…The MPA refused to register the film under that title. Finally SAMMY AND ROSIE GET LAID was released without an MPA rating…