for strong violence, language and some sexual content/nudity. 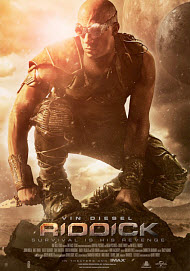 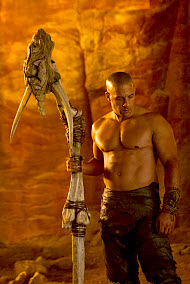 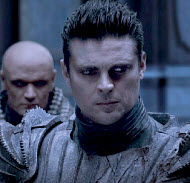 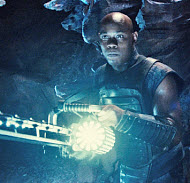 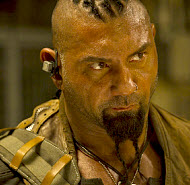 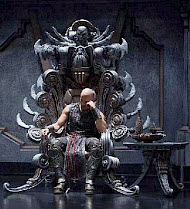 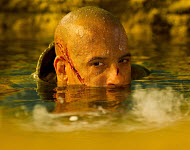 fighting for survival against great odds

“Survival is his revenge.”

We first meet Riddick (Vin Diesel) in “Pitch Black,” a convict being transported on a vessel that crash lands on a planet with two suns and some pretty hungry creatures. Riddick has eyes that have night vision, something he says he had surgically done in prison. This is a great help in fighting off the creatures that come out in full force once the planet goes black. Forward to “The Chronicles of Riddick” where Imam, the priest from “Pitch Black,” seeks out Riddick’s help as a war rages on where civilizations are being overthrown and the only hope is someone of Furyan descent (which we find out Riddick is). He also crosses paths with “Jack” from the first film. When we left Riddick in “…Chronicles…,” he had defeated the Marshal, and in following the motto “You keep what you kill,” he had become the new Marshal.

I had heard “Riddick” would pick up at this point but would also harken back to the first film and be on a remote planet. I was disappointed to find only a quick flashback of a coup to Riddick’s reign. I had hoped there would be a storyline about Riddick and Vaako (Karl Urban), his nemesis in “The Chronicles of Riddick.” Instead Riddick desires to find Furya, his home planet, but all the maps have been destroyed and all that is left is what Vaako remembers. Making a deal to be taken to this planet finds Riddick wounded and stranded on a desolate planet with minimal water, wild dogs and scorpion-like creatures to contend with. He takes his time getting to know the lay of the land, returning to his primal instincts while healing and taking care of a dingo-like puppy he finds. Seeing water and vegetation on the other side of the planet and a storm headed his way, he begins a trek across the terrain to the other side where he finds a mercenary camp. Realizing that using the emergency beacon will bring mercenaries…. With ships… he plans his escape.

Two sets of mercenaries arrive. As they track Riddick, he tells them “It’s not me you have to be afraid of,” which is a line right out of “Pitch Black.” Something worse than Riddick is on that planet and once again, his night vision and ruthless animal nature give him the advantage.

There are various homages to the first film in this series—while in chains, Riddick rhythmically clangs his shackles against his restraints as the danger of the situation intensifies, being destitute on an unyielding dangerous planet with monstrous creatures, the character named Johns (that at first had me scratching my head, but gets explained as the movie progresses), and the opening of the gate on the ship after the battle, wondering who has survived. All these scenes are reminiscent of “Pitch Black.”

I was hoping for something different with this installment in the Riddick story. I was hoping this film was more of a blend of his time as Marshal to the Necromongers (the race that sought to overthrow all others in “The Chronicles of Riddick”), perhaps leading to a battle between Vaako and Riddick, which would result in exile on the planet. Another thought was that Vaako would follow Riddick to Furya to finish him off once and for all. I like Karl Urban, so I was disappointed to see his reprisal as Vaako was just a bit part. I was also disappointed that this felt more of a rehash of “Pitch Black,” but not as endearing and much more crude. In “Pitch Black,” Riddick, although a convict, more or less sits back and watches what happens, looking for his way out. He gets his hands dirty, but does so defending a young girl. He is given the opportunity for redemption. In this film, he’s not an antihero you root for. He’s more than happy to kill his way to freedom.

One thing that set this film apart from its predecessors is the nudity and crude talk. Here we see 3 women in bed, full frontal nudity on one of them, another shot of a naked woman shown above the waist, the female mercenary “Dahl” (Katee Sackhoff—“Battlestar Galactica” TV series) is a lesbian and crudely makes reference to the fact that she does not sleep with men, another man attacks her in an attempt to rape her (fully clothed, in relatively short scene, but a vulgar reference is made that shows the intentions of the man) and a very lewd comment Riddick makes to the woman “Dahl” that made me very uncomfortable.

There is plenty of blood and violence in this film. A face is sliced in half, foul language abounds with the “F” word being the one used the most, referencing both a sex act as well as used as an expletive.

Once again Riddick’s disdain for God surfaces when he tells a young mercenary “Leave God out of this kid. He wants nothing to do with what happens next.” This young, clearly new, mercenary is the only representation of faith. Interestingly, there was also one character in “Pitch Black” that had faith, albeit in Allah, not God, who would speak of such things with Riddick, and it is that character who was carried over into “The Chronicles of Riddick.” So, whereas my first impression of the films and main character are that they are Godless, upon further consideration there is always a character present that has faith.

We can face countless situations where those around us, friends, family, coworkers, do not have faith in God. Yet we are called to be that one who does show God to others, to point the way. Matthew 5:14-16 says,

“You are the light of the world. A town built on a hill cannot be hidden. Neither do people light a lamp and put it under a bowl. Instead they put it on its stand, and it gives light to everyone in the house. In the same way, let your light shine before others, that they may see your good deeds and glorify your Father in heaven.” (NIV)

In spite of the decline of moral values and in spite of those around us, we are to be that beacon. An old saying says “You’re the only Jesus some will ever see.”

In the end, I prefer the first film, “Pitch Black.” I thought it was a great sleeper film and launched Vin Diesel and Radha Mitchell in their careers. Riddick, on the other hand, was a bit of a disappointment. It was okay but not great. Perhaps it’s the classic case of a movie that is successful, so sequels are made, but they can never quite hit the mark like they did with the first. “Riddick” is grittier and less redemptive than the other films in the series. If you like the series, you will probably want to see this. If you haven’t watched the first film, you may be a bit confused. I for one wish they had gone in a different direction with this one.

Positive
Positive—Other than the offensive taking God’s name in vain and the crack about “God doesn’t want to get involved” I liked the film. It has it’s problems. The opening sequence was too long before the story got started, and, of course, now every movie or TV show has to show a homosexual character in a positive note, but I just ignore it. I like Kaitee Sackoff in anything she plays. It would of been better if Riddick called down on God’s help Sampson style instead of ignoring him. If you like Sci/Fi, you will like the film.
My Ratings: Moral rating: Offensive / Moviemaking quality: 4

James, age 39 (USA)
Neutral
Neutral—Riddick is a graphic portrayal of the plight of a fugitive on the run from mercenaries who believe they have what it takes to capture and kill him. He only wants to return to his planet and gets involved with them in order to steal their ship. There are many great scenes where Riddick evades certain death by fighting off deadly creatures and times when he uses his prowess to out trick the mercenaries in their own game of capturing him.

This film is deservedly “R” rated for bad language, violence, brief nudity and is not for the squeamish. Some of the situations Riddick got through were admirable in that he always seemed to overcome his enemies in every situation. These became for me an image of courage and determination though in his case not for any righteous cause. If you see the film hopefully you can take away with you a redeeming message if you look for it.
My Ratings: Moral rating: Very Offensive / Moviemaking quality: 4½