Our Brand Is Crisis

for language including some sexual references. 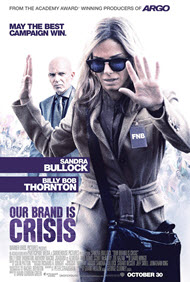 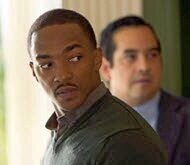 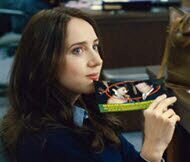 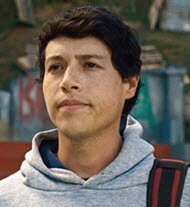 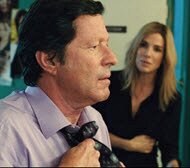 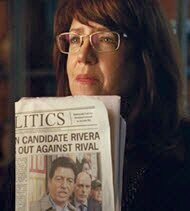 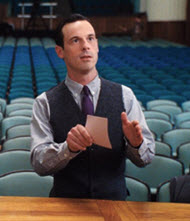 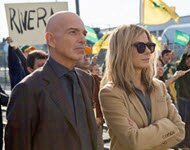 how marketing strategies are use to manipulate the opinions of voters

evaluate the comment, “if you fight monsters too long, you become one”

VOTING—Do Christians have an obligation to vote? Answer

When you’re in the movie reviewing ministry, a variety of messages and agendas come and go. And sometimes—in fact, I daresay often—you know about a half hour into a film that you’re going to have to censure it. And I’m not talking about content issues, like language or nudity, I’m talking about the message the movie preaches at the audience. Not all movies preach, for example, action movies are usually more about the entertainment of watching good triumph over evil. But when you’re reviewing a political drama, you have to be careful to pay close attention. But every once in a while, you come across a movie that seems to be driving an evil message all the way through, and then suddenly the ending takes a moral turn and shows that the protagonists were wrong. “Our Brand is Crisis” was one of these pleasant surprises.

Loosely based on true events, “Our Brand Is Crisis,” follows Jane Bodine (Sandra Bullock) and her campaign team when they are hired to help Pedro Castillo win a presidential election in Bolivia. Their main tactic is to emphasize the many problems of the economy and present Castillo as the solution. This is the meaning of the title. I found the film to be very interesting, and all the cast put on some of their best performances I’ve seen.

Honestly, I didn’t know what to expect, on a number of levels. The last movie I reviewed was “Burnt,” which was called a comedy by many, but I found it not to be a comedy at all—just a drama with occasional humor. This film isn’t as dark as “Burnt,” and has more amusing moments, including some comic relief, but still shouldn’t be classified as a comedy. But the main mystery to me was the message of this film. Some reviews said it was ambiguous. Some said it was staunchly communist. Some said it was insightful. So I knew that, in this case, I would just have to find out for myself.

There is very little violence. Someone smashes an egg on Castillo, who spectacularly punches the “assailant.” After this incident, however, Castillo “shows the other side of him” by being kind to protesters who throw rocks at his bus. A llama is shown getting hit by a car.

There are very occasional crude sexual references. A bra is used as a slingshot, and two shirtless men are briefly shown. Mimicking the behavior in the actress’s previous film, “Minions,” Jane is shown mooning a bus. By the way, the bus driver is paid to drive like a complete moron to do it. Played for laughs? Um, yes. Still offensive? Um, yes. It’s very obvious when she’s going to do it, so it would be easy for viewers to close their eyes until all the yelling and laughter dies down.

Since I’m reviewing this film for its DVD release, I’ve already taken into consideration the opinions of other reviewers. Nevertheless, there’s not much reason for you to take my word over theirs. The message I got from this movie was very positive. When people say it’s a communist movie, I think they are hugely misunderstanding the movie’s point. Throughout almost all of the film, Jane and her team use dirty manipulation to campaign for Castillo. Jane says “There is only one wrong in this, and that is losing.” But at the end, the team realizes how wrong they were—in a shocking way. I can barely imagine the humiliation! When Jane realizes how much she hurt the country, she’s so upset that she actually quits her business and joins the protesters. So yes, throughout the film, the protagonists—the ones portrayed as “good guys”—use communistic propaganda. But at the end, their methods are “exposed” to the viewers as evil. It’s pretty powerful, actually. For those who want more detail, I have written a paragraph below containing spoilers.

***SPOILER*** Castillo wins the election, and immediately breaks all his promises and turns out to be a tyrant. Jane and her team had no idea he would do that. At first Jane is defensive, claiming that she was just doing her job, but soon her heart is softened as she realizes the mess she helped to make. She realizes that she was deceived by Castillo, just like she was attempting to deceive the people of Bolivia. The deception disgusts her. ***END SPOILER***

This is a competent film that shows how foxy political campaigns can be. I have to rate it Offensive, due to its foul language, several blasphemies, and Sandra Bullock’s bare hiny. But if you can be wary of those things, I do recommend this film. It’s educational and leaves you with serious thoughts about political power.

Movie Critics
…It casts a skeptical eye at the gospel of globalization that’s preached by Jane’s team, but its outrage is more directed at cynicism than at any specific system. …The filmmakers and their stars have fun with the idea that politics is sex for those who want to keep their clothes on. It’s cute for a while. …The problem is that they… do such a good job selling this Jane that they do exactly what they’re supposed to do: They make you curious about her. You want to know how the Janes of the world happen. Is it money? Power? Ideology? You never find out. …

Manohla Dargis, The New York Times
…No amount of political manoeuvring can fix this film… [1/4]

John Semley, The Globe and Mail
…An uneven mix of cynical satire and breezy comedy. … [2½/4]

Rafer Guzmán, Long Island Newsday
…Sandra Bullock is the best part of this wobbly farce… As a look at the state of the art of political campaigning (in the US as well as in Bolivia), “Our Brand Is Crisis” does not cut particularly deep and the ending isn’t great. … [2½/4]

Lou Lumenick, New York Post
…The effort by “Our Brand Is Crisis” director David Gordon Green and writer Peter Straughan to turn the 2005 documentary of the same name into a light comedy with touches of romance and political hijinks leave the fictional version a poor candidate in the box office race. … 2/4[]

Rick Bentley, The Fresno Bee
…“Our Brand Is Crisis” fun until it gets serious… For too long, the stakes play second fiddle to the strategists and even the candidates remain too elusive to make the audience care as much as it should. … [2½/4]

Ted Baehr, Movieguide
…crass, grimy and not sure of its own message… burdens itself with foul language and sexual allusions, spoiling some pretty great performances from Sandra Bullock and Billy Bob Thornton…