for disturbing thematic material including terror, violence and some nudity, and for brief language. 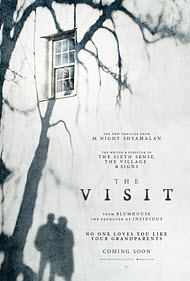 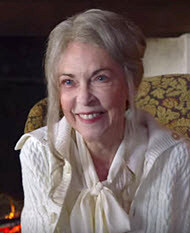 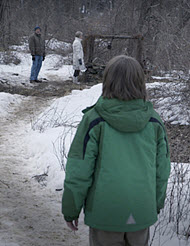 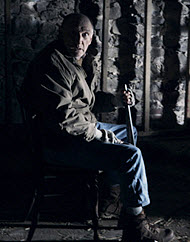 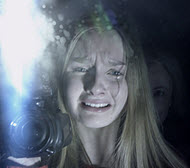 Becca, age 15 (Olivia DeJonge) and her younger brother Tyler, age 13 (Ed Oxenbould) have never seen their estranged grandparents, so when their Mom (Kathryn Hahn), who has not heard from them since she left home at 19, is suddenly contacted by them, they jump at the chance to meet them.

Grandparents Nana (Deanna Dunagan) and Pop Pop (Peter McRobbie) seem to fit the mold of a happy elderly couple in the sunset of their lives, living way out in the countryside, however unusual noises outside the kids’ bedroom after their strict curfew of 9:30pm begin to make them wonder just how strange their grandparents really are?

Pop Pop seems to be a mostly solitary figure while Nana, to put it in the words of the kids is, “weird by day, and even weirder by night” as she bumps, crawls and scratches around the house as well as right outside the kids bedroom door.

“The Visit” is portrayed exclusively from the kids’ point of view, as they are filming the trip “documentary style,” so the audience gets to experience their stay alongside them, sharing in their growing feeling of mystery and fear. While the movie does explore the damage wrought by broken relationships, including the kids’ father abandoning them, it is primarily a horror film with a slow paced build up of creepiness, clues and the requisite red herrings, before the inevitable reveal and twist in the final act. A shocker by film’s end, “The Visit” will likely be considered mostly tame by today’s desensitized horror fans, until its nail biting climax, but rest assured it pushes the envelope of the “PG-13” rating as far as it can go with subject matter.

Violence: Heavy. Most of the violence occurs in the last third of the film and includes fighting, bludgeoning, stabbing, vomiting, hanging and visuals of blood-covered weapons and feces-covered objects, the most egregious being thankfully blurred in the foreground. As suggested earlier, the violent content is less frequently seen than in the average horror film today, but it is still disturbing and more appropriate for an “R” rating.

Sex/Nudity: Moderate to heavy. The mom is on a cruise with her boyfriend during the kids’ visit, and since they use Skype (video conferencing) men and women are seen in normal poolside attire. The only nudity comes from Nana, during two totally unnecessary scenes. Once she is viewed crawling out from under the house after playing “extreme” hide-and-seek, and her right butt cheek is shown, and once at night when we see her full naked backside, while she is manically scratching a wall.

“The Visit” notably managed to touch on a few themes of importance that deserve to be mentioned.

Broken spirit: Often unexamined, the affects an abandoning father has on his kids are apparent during “The Visit.” In Tyler’s case, he has become a germaphobe, while Becca has serious self-esteem problems. A father’s primary ministry is to his wife and children, and if he is not there, brokenness is invited. Fortunately, if we seek Him, we often find God in the midst of our trials, and He truly can heal all things.

“He heals the brokenhearted and binds up their wounds.” —Psalm 147:3

“The sacrifices of God are a broken spirit; A broken and a contrite heart, O God, You will not despise.” —Psalm 51:17

Tyler and Becca both love their mom and, except for some minor kidding early on, the kids have nothing but love and respect for her, which makes for a refreshingly different and unusual familial portrayal—behavior that God promises to bless.

“Children, obey your parents in the Lord, for this is right. ‘Honor your father and mother,’ which is the first commandment with promise: ‘that it may be well with you and you may live long on the Earth’.” —Ephesians 6:1-3

Forgiveness: Becca’s real purpose for the documentary is to heal the wounds that have kept her mom and her grandparents separated all these years. The Bible tells us that this is what God wishes all of us would do for each other.

“For God did not appoint us to wrath, but to obtain salvation through our Lord Jesus Christ, who died for us, that whether we wake or sleep, we should live together with Him. Therefore comfort each other and edify one another, just as you also are doing.” —1 Thessalonians 5:9-11

Grace: The mom had left her parents on very bad terms, but makes an incredibly profound statement when she admits to Becca that going to her parents seeking forgiveness on her behalf wasn’t necessary because, “It was there whenever I wanted it.” Not so different from the choice we all should make to seek God’s mercy, and it will be given, just as The Word tells us.

“If we confess our sins, He is faithful and just to forgive us our sins and to cleanse us from all unrighteousness.” —1 John 1:9

“But God demonstrates His own love toward us, in that while we were still sinners, Christ died for us.” —Romans 5:8

“The Visit” has a well thought out script, along with believable, well acted performances by newcomers DeJonge and Oxenbould, as well as Dunagan in the role of the nightmare grandmother. Suspense and mood rule the day until the final chapter, when Director M. Night Shyamalan takes it fully into all too familiar horror film territory. A redemptive and emotional close, not nearly to the level of Shyamalan’s “The Sixth Sense,” it is a low key film for this genre with the disturbing storyline and visuals making this an adults only picture, while its dark, demonic overtones make “The Visit” a trip Christians should not be taking.

Comments below:
Neutral
Neutral—This is not bad for your average horror movie. …I don’t like profanity, either, but every secular movie today has some in it, and this one isn’t bad compared to most. …
My Ratings: Moral rating: Offensive / Moviemaking quality: 3

John, age 44 (USA)
Negative
Negative—If you skip this one, you aren’t missing anything… actually you’re missing a lot of stuff that you’d probably rather not see, and I wish somebody had told me this before I wasted all that money. This movie is dull, stupid and predictable; honestly, you probably know what the shocking plot twist is right now, even though you haven’t seen it. This nasty little piece has finally made me lose all respect for Shyamalan.

From a Christian perspective, there’s quite a bit of swearing and inappropriate talk. Spoiler: A guy takes off his poopy diaper and stuffs it into a kid’s face. Need I say more?
My Ratings: Moral rating: Offensive / Moviemaking quality: 2½

Ash, age 24 (Canada)
Movie Critics
…Canned scares and flat humor make for a less-than-stirring visit… But the dull thudding that resounds isn’t part of its effective aural design; it’s the ungainly landing of nearly every shock and joke. …

Geoff Berkshire, Chicago Tribune
…The last scene of ‘The Visit’ features a mother and daughter holding each other, crying, while the former tells the later that forgiveness is always there when you want it, and not to hold on to hate. It’s immediately followed by an end credits tag that features a 13-year-old rapping about the time he got an adult diaper shoved in his face. Did I mention that this was pitched as a horror-comedy? … [2/4]

David Berry, National Post
…M. Night Shyamalan’s “The Visit” is one stop you want to skip… In “The Visit,” he veers haphazardly from brutal slapstick to heartbreak and lets his ending dribble into anticlimax. On the moviemaker's own terms, “The Visit” is sham Shyamalan.

Michael Sragow, Los Angeles Times
…What JAWS did for beaches and PSYCHO did for showers, M. Night Shyamalan's THE VISIT may very well do for grandparents. …

Eric Walkuski, JoBlo™
…silly but effective horror flick, the basic (and somewhat mean-spirited) premise of which is “elderly people are weird.”…