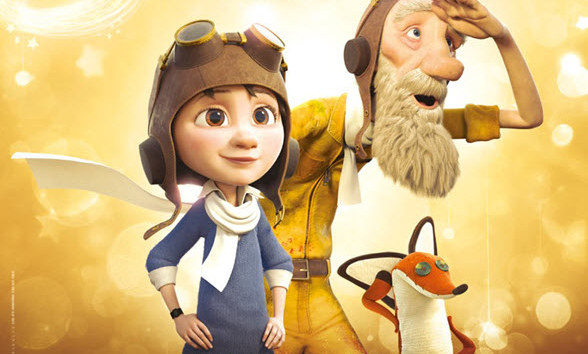 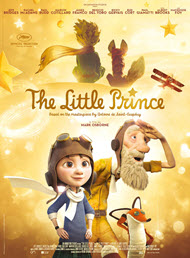 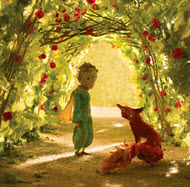 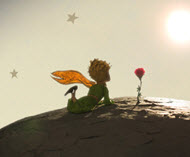 selfishness versus sacrificial love and responsibility for one another

conceit and pride versus humility

MATERIALISM—Power and money do not bring true satisfaction.

THE HUMAN CONDITION—Because of humanity’s limited perspective, confusion and fall state, we need someone from beyond our world to reveal Truth and explain the purpose of life. We need a revelation; we need the Word of God.

“The Little Prince,” based on the novella of the same name by Antoine de Saint-Exupéry, is an animated fictional movie about a girl who moves next door to a quirky, old aviator. The girl’s mother is obsessed with planning her daughter’s future academically and schedules every moment of her life in hopes that she can stay focused on her studies and excel. Meanwhile, the girl becomes friends with the Aviator, and he tells her the story of a little prince.

The prince is a boy who once lived on an asteroid. After leaving the asteroid, he traveled from planet to planet and eventually landed on Earth in the Sahara Desert. There, he met an aviator, who was stranded after his plane crashed. During their time in the desert, the aviator and the prince learn about the importance of friendship and remembering loved ones.

The movie’s theme focuses on the emptiness of life when people forget their childhoods, their uniqueness, and the people who make their lives special. The story shows that slavishly, following a course through life set by societal expectations, and measuring one’s own success according to the views of those in power, cannot produce a truly fulfilling life. The Bible also shows the lack of value in living solely for what the world deems success. In Matthew 16:26 (NASB), Jesus asked, “What will it profit a man if he gains the whole world and forfeits his soul?”

Although this movie identifies the need for something beyond a worldly life, I have some concerns about the way it portrays the spiritual or supernatural dimensions of existence. Although this heavily symbolic story is open to many interpretations, I personally sensed that the supernatural was being portrayed as functions of the mind. For example, there are characters who appear to have deity-like roles, such as ruling the universe, but later the movie depicts them as embodiments of human traits. The dialog alludes to life after death several times, but implies that afterlife existence is first and foremost found in being remembered by those still alive. There are also some occurrences that appear magical on the surface, but the line between imagination and reality is fuzzy.

On one hand, the interpretation of these supernatural phenomena as symbols of one’s imagination could be used to justify the movie, by showing that it is not occult or pagan. But other viewers may see the movie as suggesting a philosophy in which there is no absolute spiritual reality, and that what appears to be spiritual or supernatural is only the result of an individual’s psychological activity.

Morally, this movie does not have a lot of objectionable content per sé, but I found the overall tone of the movie to be disconcerting and slightly eerie, with some serious plot elements that probably make it too intense for many children. The movie is likely to be most appreciated by teenagers and adults who enjoy analyzing stories with symbolism and surreal imagination.

Violence: A character allows himself to be fatally bitten by a snake in order to release his spirit from his body and reunite with a friend. There is also a fight in which a man tries to trap a girl with a machine consisting of many claws.

Spirituality: In addition to the matters described above, the aviator describes the value of belief as being able to anticipate something that one does not know for sure to be true. However, the Bible describes faith as assurance, saying that faith is “the assurance of things hoped for, the conviction of things not seen” (Heb. 11:1).

Substance Use: In one of many strange scenes, there appear to be lots of empty beer bottles on another planet.

Other: The girl lies a few times, once under the suggestion of the aviator who tells her it is okay to falsely claim it is her birthday to get free pancakes from a restaurant. The girl once gets mad at her mother and asks when she will “go away completely.” There are also many scenes where the musical score has an unsettling, dissonant quality, creating a foreboding mood. Also, ***SPOILER*** the aviator dies at the end of the movie, and there is an emotional scene of the girl visiting him in the hospital shortly before death.

Neutral
Neutral—I am so happy to see this Web site devoted to Christians and providing educated guidance in what we watch and allow our kids to view. My opinion of this movie is a little concerning of the parallel meaning they have, similar to stories of the Bible. I think this cartoon movie is one that a parent should sit with the child and explain and also, at points in the movie, take a pause and correct the misguiding in this child’s cartoon and preach the Truth of the parallel Bible story to the child to keep the child aware of the difference and what is correct and that this is a story from another’s thoughts. Not God’s word.
My Ratings: Moral rating: Average / Moviemaking quality: 5

Lesley, age 45 (USA)
Neutral—False religious in nature—not a film or book to inculcate into children’s minds such lies. In the book… mention of Christmas and midnight Mass denotes Catholicism. Snake depicts Satan… who also told Eve she would not die… yet she did. In The Little Prince the boy says the snake bites him, and he looks like death, but he is not dead. That is the same lie promoted in Eden to Eve, because she really did die.

As for loyalty to a rose—that is not loyalty, that is abandonment and irresponsibility and neglect. As for the Universal sovereign King who said it is his fault if his subjects don’t obey… that is another untruth. It also appears to blame God for the disobedience of humans in the Garden of Eden of the Bible (of which is not a fable or parable, but a true story). God is not to blame for Adam and Eve’s insubordination or disobedience, because what he required was not unreasonable. The King in The Little Prince says that if he is disobeyed, it is because he himself was unreasonable, it’s his fault. That is not something you would want to teach children, to shift the blame for disobedience onto the Lawgiver… that is irresponsible… just as the Little Prince is. He is not a role model to imitate…

As for cracking a deal with the snake, the Prince was deceived, and was told if he was homesick, the snake could help him get back. That is a lie, and the little Prince bought into it. Never is death the answer or a help from a notorious liar snake… and never is death a continuance of life elsewhere. The disrespect towards adults throughout the story is not something that is true either about adults not seeing the big picture and all the facts.

It’s children that don’t have the experience or the wisdom. Although this Little Prince story is gripping and holds attention and stimulates thinking, on the whole, it is indirectly undermining Bible truth and presents or misrepresents what happened in the Garden of Eden and who the Universal Sovereign and Creator is.

Also, there is no life on any other planets except Earth, and that is another untruth told in the story as the Prince visits various planets where inhabitants live. To have foxes and roses and snakes talk… as if their wisdom is noteworthy… also is to personify what shouldn’t be.

The rose was, however, an interesting character… who wanted attention and got herself waited on in a manipulative and hurtful way. The Prince left her because her behavior was oppressive and caused him suffering. She was selfish and unloving… she acknowledged that… but also said the Prince was a silly fool, too. The rose used pain to communicate love to the Prince… that sounds like sado-masochism… where one uses pain during what is loving in order to derive selfish pleasure from seeing others dominated and in pain.… The roses thorns were her confidence, yet the cold was her fear… but in the end she admitted that it wasn’t that cold really, and the cough was a fake, and that she no longer wanted the glass globe to protect from the cold… nor did she want it to block the social interaction she needed from caterpillars who would morph into butterflies.

Yet prior to being abandoned, she relied solely on the Prince which is one reason he abandons her… she was too clingy, and needy, and critical.

Throughout the entire story, the Prince longs to return to what he abandoned and, in the end, chooses to die to get back to his planet, as deceived by the snake. Many say it’s suicide, I don’t call it that. I call it being deceived by Satan the devil, the original serpent. The Prince believed, just as Eve believed, that he wouldn’t really die. He too bought into a lie. The whole story really promotes lies and reverses what really is truth… exchanging lies for truth, and truth for lies. The aviator encourages the little girl to lie to get pancakes, and lie to her mother.
My Ratings: Moral rating: Extremely Offensive / Moviemaking quality: