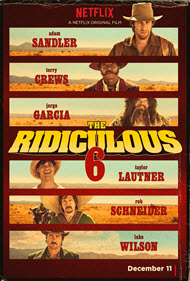 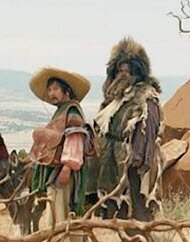 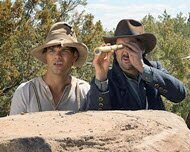 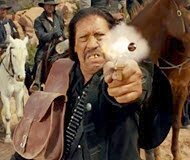 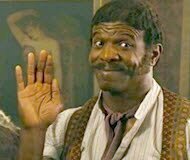 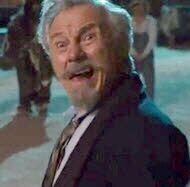 When I saw the trailer for this film, my jaw dropped. An Adam Sandler Western! Most people love a good Western, but it was obvious that this film was a satire. And that’s okay, I personally enjoy a good satire, too. There are many unique characteristics we love about Westerns that can be spoofed. Sadly, I have to be careful when I see Adam Sandler’s name on a cast list. I was introduced to him in the film “Anger Management,” which I found original and witty, but also very raunchy. I thought he was a very good actor, but I saw an almost unwavering pattern in the reviews of his films: too much indecency.

But, being that “The Ridiculous 6” is being talked about a lot, I felt that it deserved a review from a Christian perspective. And I’m actually pleased to report that it wasn’t nearly as raunchy as Adam Sandler is infamous for—at least in terms of sexual humor. But I’m disappointed to report that it had other problems that I didn’t expect.

Many people complain that Adam Sandler and Rob Schneider movies are terrible because of their silly slapstick humor. But this movie is a farce. If you don’t like farces, you won’t find the movie funny at all. But farces are supposed to be stupid and outrageous. That’s basically the whole idea. And this movie definitely achieves that goal. I didn’t laugh at the inappropriate humor, but there are several other scenes that gave me hard, genuine laughs. The costumes and sets are also high quality. The actors all play their roles well, but, in my opinion, it is Taylor Lautner that steals the show. His accent and innocence make a very lovable character.

The plot follows Tommy Stockburn (Adam Sandler), a white man raised by Native Americans. One day, he meets his biological father, who is soon kidnapped for ransom by a gang of outlaws. Determined to get his father back, he chooses to steal money from dishonorable people to collect the amount needed for the ransom. Along the way, he meets five half-brothers he didn’t know he had (all from different women), and they all set out together to save (and meet) their father.

The first problem sticks right out in the plot. The protagonists are robbers who justify their sin because the people they’re stealing from are bad. And don’t think that the story ever teaches against it. They never “learn a lesson” about stealing. We’re supposed to root for them from beginning to end. (And you’d be surprised how well it makes you feel that way!) I believe this is the film’s biggest problem.

The violence in this film is too comic and unrealistic to be considered graphic, but brutal and shocking things happen. Tommy defeats some outlaws by pinning them to a structure with tomahawks (one in the crotch), and one man has his head cut off and continues to dance around afterward. The scene I found most disturbing is where an outlaw has to scoop out an eye to join the gang. We only see a silhouette of him doing it, but the silhouette shows the eye dangling. There are the usual gun and fist fights throughout, as well, but very little blood is ever shown.

The sexual content is less than explicit, but pretty obscene, nevertheless. To be fair, the six men’s father is portrayed as an irresponsible man, so his casual relations with the men’s mothers falls under negative light, along with his stealing, gambling, and drinking. But sex, masturbation, and private parts are often crudely joked about. In one scene, Pete creates a diversion by lying down, feeding a donkey a carrot near his crotch, and giggling. After that, he removes the carrot, but continues giggling. In another scene, Pete asks a man and his wife if there is a church in the town. The man says there is not, because the town has no laws. Pete says “So it’s okay if I do this to your wife, then?”—and shoves his face in her exposed cleavage. This is inappropriate, but I have to admit he had a pretty good point.

I was refreshed to hear far fewer swears than one would expect. There are 15 or so s-words, and occasional uses of d*mn and anatomical slang. There are plenty of other negative elements, however. There are some jokes about the mentally disabled, one scene of gratuitous toilet humor, and irreverence about the assassination of Abraham Lincoln. There are also a few references to pagan Indian worldviews.

Despite the very problematic end-justifies-means mindset, there is one significant thing to admired about the six sons. Even though their dad was irresponsible, having a good relationship with him is very important to them. That’s rare to find in modern media.

For fans of Westerns and satire, this is a very entertaining movie. But it is very far from the ways of God. There is little to no redemptive value. So even to mature audiences who just want a lighthearted guy comedy, I strongly recommend that you not put your Netflix payment toward this. It’s no doubt cleaner than “A Million Ways to Die in the West” and many of Adam Sandler’s other movies, but still has too much crude humor and, even worse, a dangerous basis—and the satire is no excuse for that.

“VOTING” FOR BAD MOVIES—Every time you request a streaming video you are casting a vote telling Hollywood “That’s what I want.” Why does Hollywood continue to promote immoral programming? Are YOU part of the problem? Answer