for thematic elements, disturbing images, brief nudity and a scene of sensuality. 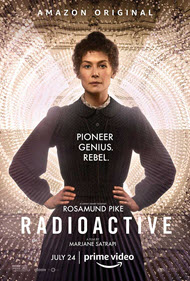 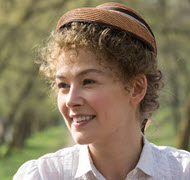 Discovery of 2 elements: radium and polonium

Ultimate results of Curie’s discoveries throughout the 20th century 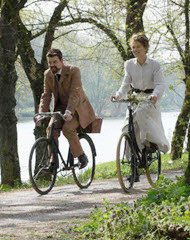 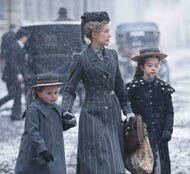 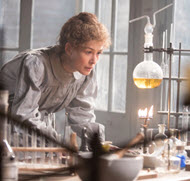 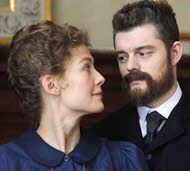 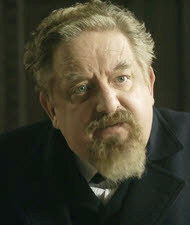 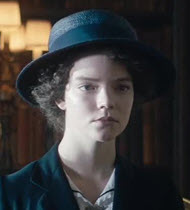 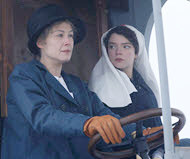 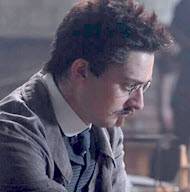 This film is based on the graphic novel Radioactive: Marie and Pierre Curie—A Tale of Love and Fallout by Lauren Redniss. 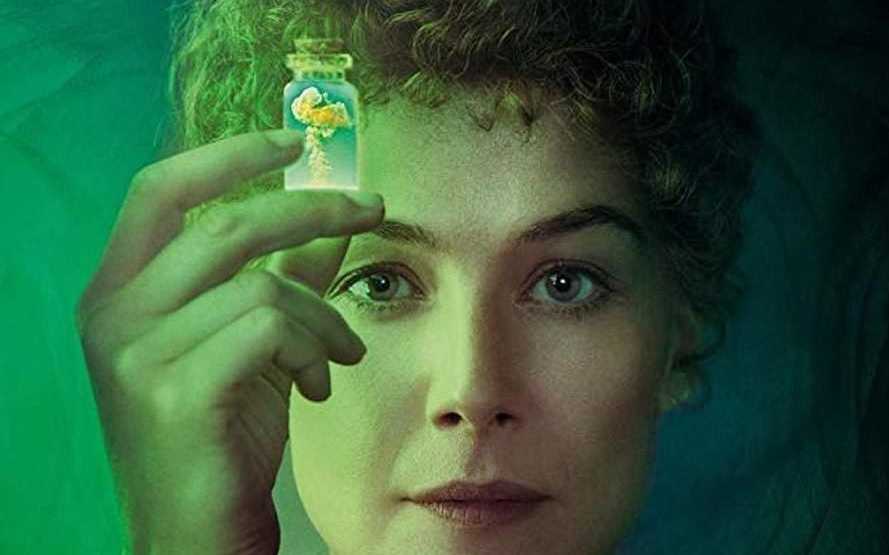 Modern science owes much to Marie Curie, the woman who, alongside her husband Pierre, conducted pioneering research on radioactivity, and won two Nobel Prizes in two different scientific fields. Without her, we would not have cancer radiation treatment… or the atomic bomb. This biopic contains fictionalized elements, but also shows her struggles and triumphs.

In Paris 1983, Marie (Rosamund Pike) bumps into a handsome young scientist on her way to confront a panel of scientists over her fellow male scientists moving around her laboratory materials. His name is Pierre Curie (Sam Riley), but she dismisses him out of hand, her mind on the injustice of being the only woman in a lab, and often underestimated by her fellow male scientists, who “fail to regard her with the proper respect.” Her disinterest in social niceties wind up getting her kicked out of her laboratory, and her refusal to accept “charity” from everyone leaves her without a place to work—until Pierre asks her to keep an open mind, and see the space he is willing to share with her. A brilliant scientist in his own right, Pierre thinks her research is exciting and believes together they could accomplish great things.

Their scientific partnership evolves into a loving marriage and a matching of wills and minds. Their experiments on uranium leads to a massive breakthrough in understanding atoms and radium. Excitement about this light-generating substance spreads across Paris, as everything from ‘radioactive’ cigarettes and matches to garments becomes a fad. As a Nobel Peace Prize looms on the horizon, their marriage faces a new challenge and a tragic eventual discovery.

This film is not entirely historically accurate—much on-screen time devotes its energies to Marie’s habitual fear of hospitals, whereas there’s no evidence she had a phobia. The screenplay does a nice job of making her a nuanced woman—temperamental and arrogant, and emotionally invulnerable to accusations and criticisms. A “difficult woman” at the best of times, Marie alienates her fellow scientists but also gets things done no one else could. Her iron will is as remarkable as her stubbornness. Rosamund Pike turns in an excellent performance as the young, fiery and opinionated Marie, and a much older, wiser, and sick Marie.

But the screenplay does her no favors. It opens with an old Marie being taken to the hospital from complications of radium poisoning, then flashes back in time to let her story unfold, but at key moments, flashes forward in history to disconnected radiation events to show us the good (a cancer treatment) and the bad (the bombing of Hiroshima, and the Chernobyl nuclear disaster). I didn’t like the “modern” flash-forwards, since they took me out of the story and felt heavy-handed; a card at the end stating subsequent radiation disasters would have been just as impacting.

While the costumes are good and accurate to the period, the music is grating on the ears.

There’s no bad language and very little violence—the worst of it is a man being run over by a carriage; we hear a sickening crunch as the wheel crushes his head, then see his body from a slight distance at night as blood pools around him on the cobblestones. We see nuclear explosions rip through testing sites and take out Hiroshima. Blackened bodies from the war spread out on bloody and muddy battlefields. Marie spots a burned corpse tossed into a tree by an explosion. We see dying men awaiting transport to hospitals, and those who had their limbs blown off in battle (some bloody, some dead, some after amputation). People cough up blood into handkerchiefs.

Marie is often quite rude to other people. There are also anti-immigrant sentiments present, since not everyone appreciates the fact that she is Polish. In a reference to the prominent anti-Semitic opinions of the Victorian age, she is accused of “being a Jew” (she is not). People smoke and drink.

A local medium uses radium to make her séances more interesting—Marie and Pierre attend several of her public performances, where they argue about whether or not an afterlife exists. Her husband insists séances are just another form of science; she calls the woman a charlatan and reaffirms her atheism to her sister (when asked if heaven might exist, she says there is no proof of an afterlife and to believe in one is unscientific). Later, after the loss of someone dear to her, she encounters another medium in the street and begs her to bring back the spirit of her husband so they can communicate. After being called a “dirty Jew,” Marie says she tried to tell the person she was a lapsed Catholic, but it did no good.

Marie informs Pierre at the start of their partnership that she will not become his mistress. He later proposes. The scene cuts to them skinny-dipping together (we see full backside nudity twice, partial nudity once, and brief side nudity). Because we never see them get married, and the next scene is him giving her a wedding present of their own laboratory, it’s unclear if they were married at the time or not. There is a brief love scene after marriage (they roll around in bed and kiss each other, then their shadows merge on the ceiling; they are naked, but we see nothing but his bare back).

There are a few references to sex (she mentions the word in a Paris café, and everyone stares in disapproval; she laughs when her husband said he had given up on women before he met her, and she teases him by saying, “From what you’ve told me, you had barely started!”). Many years later, she has an affair with a married man whom she does not love, and shows no remorse for it (justifying her behavior to her daughter with a separation between her professional and private life; ignoring the press calling for her to leave Paris and shaming her for their affair; avoiding the xenophobic crowds shouting outside her flat for the “Polish Jew” to go home). We see her and her lover kissing, and waking up beside each other in bed once.

Though not paced well, I found the film interesting, since I knew very little about Marie Curie prior to seeing it. One thing that did stand out to me was how—oblivious to the danger of radiation—Marie and her husband handled radioactive materials without gloves, and all of Paris instantly fell upon the new discovery as a “gimmick.” Smoking it, bathing in it, sewing it into their clothes, and placing it in their homes. It reminded me of how fallible humans are, sometimes too quick to accept something and believe it, innocent, and short-sighted in their understanding of the bigger picture—that when we dabble in things we do not yet fully understand, we cannot foresee the outcome. Something intended for good, as a source of electric light, can also be used to decimate cities. Only God knows what lays ahead of us. How much we need wisdom when making scientific advancements.

Though a remarkable woman, Marie was not perfect—and this biopic does not shy away from showing her in all of her “humanness.” It is a raw, honest portrayal of a woman whose scientific discoveries helped shape the world as we know it today, for good and evil.

Positive—Marie Curie (1867-1934) is still recognized as one of the world’s most profound scientists. Her life’s work with husband Pierre has penetrated humanity from the late nineteenth century through today and will continue into our future. Her passionate pursuit of discoveries left a variety of social and scientific stereotypes as unrecognizable debris in the wake of her nuclear success.

“Radioactive” is a rich portrayal of the extremities in Curie’s life. Early in the film she declares to a group of distinguished scientists, “We are here to tell you that you have fundamentally misunderstood the atom.” Rosamund Pike colorfully presents Marie as a character who is fiercely guarded yet driven by unbounded generosity. She is stubbornly independent and also reliant on close personal ties; simultaneously challenged with fame as well as intense rejection. Her seemingly limitless tenacity is balanced with significant personal uncertainties.

One of the exceptional elements in the film is Marie’s search for God. Her unshakable faith in science’s clarity is contrasted with her foggy quest for answers about Him and life after death.

There is a skinny-dipping scene; evidence of injury without intense gore and sex without details; an adulterous affair and its damaging effects; visiting a séance. Its musical score is a little odd.

As a refreshing departure from movies which rely solely on action and elaborate graphics, this one dives intimately into Marie’s world, illustrating with detail her work and urban life in Paris one hundred years ago. Maybe the only missing piece is an array of the pleasant and putrid smells, but they can be easily imagined. Overall, this is a smart movie with depth, thought-provoking content, and important lessons from start to finish.
My Ratings: Moral rating: Average / Moviemaking quality: 4
Peter E. Schultz, age 69 (USA)