for some rude material, thematic elements and language. 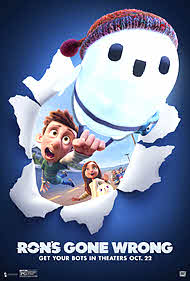 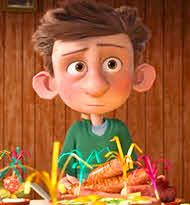 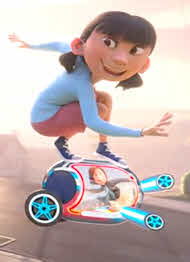 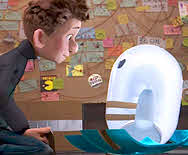 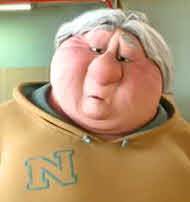 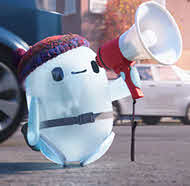 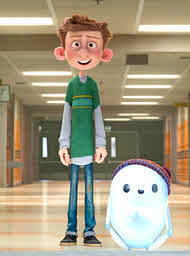 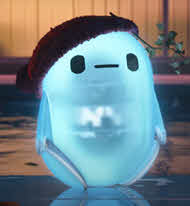 Barney doesn’t have any friends. The last time he had any friends, that he can remember, was when he was six, and even then those friends were just some kids who lived next door to him; they weren’t really his friends. On top of that, everyone at his school has a B-bot… except for Barney. This makes Barney feel even more alone.

What’s a B-bot? Why it’s only the most amazing robotic companion to ever exist! It is your ultimate guide to making friends. With this robot you can upload pictures, livestream while walking, post videos, friend request others who have B-bots, video message each other, and pretty much anything else you can think of! Made by Bubblebot, it is the latest invention is social media integration, helping children connect with other children in a much easier fashion.

It just so happens, though, to be Barney’s birthday. Barney’s dad, at first, is hesitant to get him a B-bot because he doesn’t want him to live on screens all the time, like his classmates at school. However, after seeing Barney being picked on out outside of his home, his dad reconsiders and is able to “acquire” a B-bot.

However, when Barney tries to activate his B-bot, it doesn’t work exactly the way it should. In fact, it barely turns on at first. When it finally does activate, it can’t even get Barney’s name right. “What kind of B-bot is this?” Barney thinks to himself. In fact, the first time Barney leaves it alone in his room, the B-bot causes huge damage to his room. “It’s defective. I need to return it,” Barney thinks to himself.

But then during a confrontation with a former friend (sadly turned bully), the B-bot suddenly begins to defend Barney. “Hmm, maybe this glitchy B-bot isn’t so bad after all. Maybe I just have to work with it.” After all, all anyone ever needs in life is just one good friend, right. In Barney’s case, it just happens to be a robot.

Countless critics in the weeks leading up to the release of “Ron’s Gone Wrong” have stated that this film isn’t the first to directly take aim at Silicon Valley, big tech companies and the pitfalls that come with how much access children have to social media and the internet.

What is unique however is the overall approach the film takes through it’s messaging. It starts in the smallest of measures, in those brief moments where we witness Barney trying to create the perfect friend for himself through the B-bot, Ron. However, as the film progresses, without spoiling the film, let me just state the other characters play a central role in driving the central message that kids (and even young adults) need to hear: your identity and self-worth are not found online or superficially, they are found with real people who truly care about you.

It’s a message that is presented nicely and consistently throughout the duration of the film with a heart-gripping moment toward the climax of the film. The central theme is driven by some terrific performances by Zach Galifianakis, Jack Dylan Grazer, Kylie Cantrall and Richardo Hurtado.

As far as content issues are concerned (which is discussed below), the main issue is a moderate amount of violence (most of it tame) and some language issues, which I honestly thought was a nice change of pace since in most animated feature films today, such as “The Addams Family 2,” the content is more adult-based and far more questionable.

Violence: A kid is almost hit by a car. In some very brief moments we see a house on fire and someone trying to chop a live chicken with a carving knife. Ron is seen burning Barney’s room. A lot of violence occurs to Ron (even though he’s a robot, I still listed it) One of these scenes includes Ron getting electrified in the water. Sometimes Ron falls apart but he comes back together. Ron and a character are almost crushed by a machine (they are saved). Kids use their B-bots to begin attacking each other in one scene and destroy part of a school (not too lengthy of a scene). A character collapses from his asthma and is rushed to the hospital (they are okay). A character falls down a large shaft (they are okay). There is a chase scene.

Language: “recess H*ll” (1), H*ll, suck(s) (3), “I can see its ro-butt” (referring to Ron’s bottom), shut-up, dumb-a*ss (spelled weird). Someone mentions “I cannot pull his head off.” Other language includes someone being called the “poop girl” repeatedly, “plastic-sucking,” and “psycho.”

Sensual Material/Nudity: People mention Ron is nude (most B-bots can download character skins for themselves. Ron cannot). An old lady is asked by Ron if she could go to the shed and be Barney’s friend.

Occult: Someone mentions an uncle was possessed (it was really an allergic reaction).

Other: Someone filters Barney out of a picture. Barney gets bullied for not having a B-bot. There’s talking about mending a hand with vodka and another item. A B-bot is seen being stolen. A B-bot monster (made up of different B-bots) “poops” a girl out after pretending to swallow her.

If we’re honest with ourselves, there are many of us who cannot live without our devices: our cellphones, computers, TVs. Yet, there are those around the world that live without these things and perhaps they are better for it. Is it possible that, like Barney’s classmates, we can sometimes become so engrossed with our technology that it demands TOO much of our attention; that technology becomes our god INSTEAD of God Almighty himself?

It can happen if we’re not vigilant. Technology, in the right amounts, can be beneficial, educational, and, at times, relaxing. Too much, however, can take our eyes away from the Lord and distract us from living a life for Christ. We can get caught up in the sensation of likes, retweets, shares, follows, and such that God is lost and technology is idolized. The Bible warns about idolatry, so much so that it is one of The Ten Commandments…

“You shall not make for yourself an image in the form of anything in heaven above or on the earth beneath or in the waters below. You shall not bow down to them or worship them; for I, the Lord your God, am a jealous God, punishing the children for the sin of the parents to the third and fourth generation of those who hate me, but showing love to a thousand generations of those who love me and keep my commandments.” —Exodus 20:4-6

Also, for your reference…

“The idols of the nations are silver and gold, the work of human hands. They have mouths, but do not speak; they have eyes, but do not see; they have ears, but do not hear, nor is there any breath in their mouths. Those who make them become like them, so do all who trust in them!” —Psalm 135:15-18

“Being then God’s offspring, we ought not to think that the divine being is like gold or silver or stone, an image formed by the art and imagination of man.” —Acts 17:29

Remember, making anything a greater priority than living for Christ and serving Him is a form of idolatry.

At its core, “Ron’s Gone Wrong” has a heartfelt, genuine message about overindulgence in social media, its influence over children and the necessity of face-to-face friendships. It’s a far cleaner animated feature film than what has been coming out in recent months. However, like Ron, there are a few hiccups and glitches with this film: the violence and language in particular.

Putting that aside, however, I feel this is a film that is relatively safe for viewing for older children and pre-teens (teens will likely be bored). At the screening I attended, I heard some laughs, some surprised sounds and even some silence, as children sat with their parents, spending time with each other… face to face. In short, this is a film I am fine with recommending.

Positive
Positive—I only went to this movie because my daughter wanted to see it. The previews did not do it justice, because they made it seem like this would be a stupid movie. It actually was quite entertaining, both for kids and adults, and I would recommend you take your kids to see it. I didn’t notice anything offensive about the movie, and it had a good and relevant message about what true happiness is all about.
My Ratings: Moral rating: Better than Average / Moviemaking quality: 4½
Frank, age 53 (USA)
Negative
Negative—So nobody noticed at the end when the kid complained about his robot was supposed to be a troll and the robot declared he gets to choose himself and turned into a flamboyant pink robot? Nobody caught the gender identity problem that they snuck in. This is how devious movie makers have become… even a Christian reviewing site didn’t catch it. Shame, it was such a good movie
My Ratings: Moral rating: Offensive / Moviemaking quality: 5
Adam Bryant, age 39 (USA)