for strong action violence, a scene of sexuality and some language 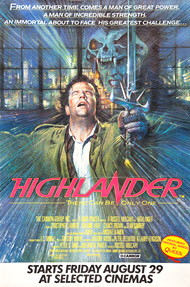 This film was slammed by critics, but was a huge hit. It spawned several film sequels and a long-running TV series, and gave us the most popular occult super-humans since Vampires: namely, the Immortals. The Web has a large number of Highlander/Immortals sites, many of them connected with specialized fan clubs.

The original film explains that Immortals have always been among us; they are born of ordinary human parents but cannot die except by being beheaded, stop aging when they reach adulthood, cannot have children, and must fight each other until only one is left to rule the world. Connor MacLeod (Christopher Lambert) discovers his Immortality in 1536 when he receives a deadly wound in battle, but recovers. For this, he’s driven out of his superstitious Scottish Highlander village with his arms tied to a crossbar (creating a visual image of Jesus on the way to crucifixion). He’s befriended and instructed by another “good” Immortal (Sean Connery) who is really an ancient Egyptian (the fact that Connery’s character is older than Jesus suggests the idea that perhaps Jesus was just another Immortal and was not resurrected because the cross didn’t really kill Him). The film hops around from the 16th to the 20th centuries, but is filled with violence, coarse language and supernaturalist special effects in both eras. When one Immortal takes another’s head in battle, he receives the power of the other; this causes telekinetic effects (flying objects, breaking glass) nearby. In the tradition of Eastern mysticism and “Star Wars”, here’s another example of an impersonal “force” which can be used for either good or evil. As the number of Immortals dwindles, we are encouraged to root for MacLeod because compared to his strongest adversary, the evil Kurgan (Clancy Brown), MacLeod would make a pretty nice Antichrist.

There are two instances of brief female partial nudity, one in a sex scene. The Kurgan rapes MacLeod’s 16th century wife (off-screen); later, he abducts MacLeod’s 20th century girlfriend in order to finally draw him into battle. I have a strong stomach for weird material, but the occult special effects in the final outcome are extremely offensive. I had to turn away from this scene.

Since the original film wasn’t written with sequels in mind, some inventive backtracking was needed to create them. I haven’t seen any of the sequel films; but according to the reviews, it is explained that Immortals are actually the spirits of beings from the planet Zeist. In the TV series (I’ve seen all or part of about a dozen episodes) another Immortal from the Clan MacLeod is the lead character, and the storyline and action mimic the concept of the original film: all kinds of people (Christians, witches, historical persons such as Lord Byron, a prehistoric “Four Horsemen”) are shown as Immortals. This suggests to the viewer: “Hey, anybody could be an Immortal, even me!” Who was it that first told people they could be as gods? (See Genesis 3:5)

One of my favorite films from adolescence. The violence is… fantastical? As swords clanging and heads rolling aren’t exactly what could be called plagues of our day (akin to “Sleepy Hollow,” I suppose) and the sexuality is brief, and more a thing of intimacy and love than of cheap-o flesh peddling. As far as being anti-christian… well… not nearly as pervasive as the reviewer implies.

The conclusion that Christ was an Immortal is purely the reviewer’s and not the movie’s. This is not even hinted at—immortals do not even know from whence they came. The reviewer also fails to mention the fantastic soundtrack supplied by Queen. In conclusion, a “star wars” for discerning teens and adults who enjoy the fantastical in their storytelling. My Ratings: [2½/4]

Joe Foster, age 20, non-Christian
Comments from young people
“Highlander” is an excellent film, even though its special effects are not very good. I fail to see the connection between Eastern mysticism, occultism, and the lightning stuff… In fact, one could view the movie as a tale of good vs evil, with good winning (MacLeod doesn’t want to use his power to rule the world; the Kurgan does and would rule as a tyrant). Nowhere in the movie is Jesus mentioned at all, so what’s with the bit about Jesus being an Immortal?

Bottom Line: “Highlander” is great, though quite violent. See it to prove the critics wrong (but don’t see the sequels, except for maybe the new one coming out in a year or so). My Ratings: [3/4]

Matt Quinn, age 15
Response from reader—I see I hit a raw nerve. Since at least two people say that I imagined the reference to Jesus, I’d like to go over that in detail. In H.G. Wells' short story “The Man Who Could Work Miracles,” a man suddenly develops the ability to make anything he says come true. His friend remarks that maybe that explains the miracles of Mohammed. It would have been ham-handed to add “…and of Jesus.” The point was more effective by being unstated and subliminal.

“Highlander” does the same thing. According to the Bible, Jesus is not AN Immortal but THE ONLY Immortal. Being both God and man, he’s the only human who has life and immortality in himself (John 5:26; I Tim 6:13-16; Rev 1:18), although Christian believers share his immortality by abiding in him (Gal 3:16, 29; 1 John 5:11-12). In no sense can Jesus be considered just one of a group of equals. But in some occult groups (including one I belonged to before my conversion), that’s how he’s portrayed—as one of several “Masters” with special powers or enlightenment.

The catchphrase of the Highlander myth is: “In the end, there can be only one;” and Jesus clearly isn’t the one since he’s nowhere in sight during the final battle whose winner gains the knowledge of the universe and lordship of the Earth. (Anyone who usurps something rightfully belonging to Jesus is an Antichrist—a substitute Christ. The Immortals’ “Prize” certainly qualifies. Connery’s character says that if the Kurgan wins, the world is in for an eternity of darkness; so we’re talking about PERMANENT lordship.) But Jesus DID exist in the imaginary Highlander world and must have been special, because all Immortals respect Roman Catholic churches as “Holy Ground” where “The Game” (combat) cannot be played. The logical conclusion is that Jesus was an Immortal who got killed off at an earlier time. And since Crucifixion wouldn’t have killed him, he’d have come out of the tomb alive, only to be beheaded later.

This is a clever new presentation of the old “fainting on the cross” anti-Resurrection theory (read about that theory by clicking the link on the word “kill” in the original review). In any case, the whole Highlander Phenomenon—movies, TV, an FRP game—is blasphemous mind-clutter and is especially dangerous to viewers who can’t tell fantasy from reality.