for elements of violence and peril. 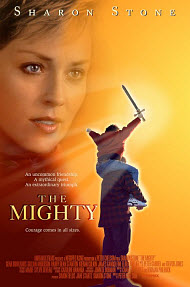 armor in the Bible

What is the TRUE meaning of Christmas? Answers for skeptics. Plus carols, games, coloring pages, reviews of Christmas movies, and more.
Pain and suffering

“Courage comes in all sizes.”

“But you are a chosen generation, a royal priesthood, a holy nation, His own special people that you may proclaim the praises of Him who called you out of the darkness into His marvelous light.”
—1 Peter 2:9

First things first. “The Mighty” will be inevitably compared by audiences to “Simon Birch” (1998) because both films' heroes are affected by Morquio’s Syndrome, an actual degenerative health condition. Take away this aspect, and the two films are dissimilar as apples and oranges. No question about it.

“The Mighty”, based on a book Freak The Mighty by Rodman Philbrick, charts the friendship between Max (ELDEN RATLIFF), a sleeping giant of an adolescent, and Kevin (KIERAN CULKIN), the disabled boy with too much knowledge and imagination on his hands. Neither boy fits “in” at school, and they are eventually peer pressured into their own imaginary world of King Arthur, of Camelot, of chivalry. Max wants Kevin’s intelligence, and Kevin wants Max’s legs—the predominant image of “The Mighty”, in fact, is of Kevin sitting on Max’s shoulders.

The beginning of “The Mighty”, sad to say, depicts some callous and cruel harrassment and torment of Max—and later, of Kevin. While there is very little profanity or swearing, the characterizations are rather aggressive if not downright painful to watch, and there’s no doubt many old wounds will be ripped open for some teenage viewers. Clearly, this is well within “PG-13” territory.

A lot of Max’s troubles concern his family background, which I won’t reveal here. Suffice to say, he lives with his grandparents Grim (HARRY DEAN STANTON) and Gram (Gena Rowlands). His grandmother is a conspicuously Christian woman who keeps a picture of Jesus in the kitchen. They don’t say grace before meals, but it’s quite apparent they’re raising Max with morals.

Also raising a child with morals—though she clearly gets by with prayers and the grace of God—is Gwen (Sharon Stone), who’s resigned to the fact that her son Kevin has a dictionary for a brain but faces an uncertain future. It’s ironic Sharon Stone is credited as a lead role in “The Mighty” when her total screen time amounts to roughly two or three minutes in as many scenes. She’s a supporting actress, not lead.

All in all, “The Mighty” feels a lot more sentimental than it should be, thanks in no small part to an Irish/Celtic soundtrack by Trevor Jones and a title song, “Freak The Mighty” by Sting, with lyrics pertaining to the plot. Would this movie be as affecting without the music? Not likely. But, that’s not to say this isn’t a socially and morally redeeming movie, because it is.

“The Mighty” is rated PG-13 for infrequent profanity (it’s there, but not too noticeable), sporadic violence, and recurring menace. The subject matter in this movie is rather strong and not suitable for children under 12 or 13. From a Christian perspective, however, there is a lot of substantial material for parents, teachers, or/and pastors to discuss with their teens, such as: What’s your part in contributing to the kingdom of God? And, unlike “Simon Birch”, there are no sleazy one-liners from children. The dialogue is mostly, not entirely, clean.

Positive
“What a great movie!”…
It is so sad that so many will miss a film of this caliber because of a preference for fast-paced or violent films. This movie was fun, sad, exciting, joyous, and full of moral and social values. It was a great EXPERIENCE and we are so glad we saw it, thanks to the review submitted by Christian Spotlight. How rare to see such a good movie, to feel so good when it ended, and to feel we made a good investment of our time and money!

Nancy, age 45
Comments from young people
I liked this movie a lot!! Kids look at it and think that it will be a boring, serious movie, which is how I looked at it before I saw it. Actually it makes you quite apprehensive at several spots. (Which I won’t give away now.) It shows that sometimes our heroes are kids who fail to be recognized. This movie touched three types of emotions in me… it was comical, sad, and sort of suspenseful. All the acting is very good. I would recommend this movie to pretty much anyone, except for young kids.