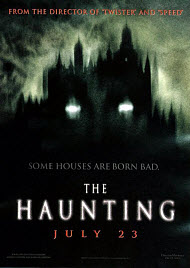 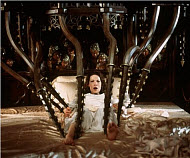 Should Christians participate in the Halloween holiday? Answer

“The Haunting” has several elements that are very good, but ultimately the film is a very mediocre one at best. It’s a horror film, but it’s not scary. Nor is it the type of film that’s so bad that it’s just fun to watch and poke fun at.

“The Haunting” is a remake of the 1963 adaptation of the novel of the same name. It follows the patients of a psychologist who is doing a study on fear, in the guise of sleep-disorder research. He takes his patients to a spooky house, but while they stay there over the weekend, the house develops a bond with one of the patients. While the 1963 film used sound and psychological suggestion to promote a feeling of terror, the newer version quickly abandons this in favor of an all-out CGI-effects-fest that, instead of being scary, look pretty cheesy and silly instead. They are not bad effects, they just feel horribly misused.

To be fair, there are a couple of scenes that might make one jump, and the atmospheric build-up for the first half hour of the film is somewhat effective. This is largely due to the amazing set design. The house looks terrific and creepy, with opulent rooms and eerie statues, and a fireplace that looks like the gaping mouth of some strange face.

The cinematography through most of the film is also pretty good, as is the score. The acting isn’t terrible, but is nothing great, and coupled with the pretty lousy screenplay, the characters are just not very convincing.

From a Christian perspective, the movie is hardly the bane of all good morals, but it’s got little good going for it. While the violence quotient is relatively low for a horror film, someone is briefly shown being beheaded. There is also some brief profanity, and a few sexual innuendos, including the token gratuitously bisexual character. In short, don’t bother watching “The Haunting”. It’s escapist entertainment, which isn’t necessarily a bad thing. The problem is that it fails to entertain.

After reading the comments on this film I am surprised that no one caught the obvious Christian symbolic meaning of this film. The characters of this film all stand for the basic types of people such as: the doctor: the scientific big headed oxford briliant people / Theo: the thrill seeking individuals; also homosexuals and bisexuals / Luke: the regular people / Elenor: Jesus Christ / Hill house: the once beautiful but perverted and evil world / dead Hugh Craine aka the ghost: Satan. Notice when Elenor first enters the house the knockers on the front doors are of Adam and Eve. Meaning: Christ entering the world of man willingly to save them. Notice that the house (or Hugh Craine because Craine inhabited the house and had control over it) would not let any of them leave despite all of their efforts. Like when Luke tried to save himself by shredding Craine’s picture only to find himself flung into the fire place is obviously saying that our attempts at salvation do not work. Only when Elenor confronts Craine head-on and sacrifices herself to bond Craine in hell are the occupants of the house able to escape. Notice that when Elenor is being held on the doors of “purgatory” after the sacrifice of her body is held in the form of a cross; with her arms outstretched and her feet together. This is all to show that only through Christ’s sacrifice can we escape the trappings of sin and Satan. On the note of Theo’s homosexuality I ask: did Christ not die for everyone? My Ratings: [3/3]

Jerry Hoff, age 65
I have to disagree with everything that has been said so far about this movie. I found it terribly scary!!! I thought it was awful! The old house was pretty cool, but that dude Mr. Crane, who lived there… he was freaky! The plot was a no-brainer, but I still got really freaked out. My Christian friend was telling me the other day how she doesn’t see horror flicks, because all they do is freak her out and they’re not good for you. I thought she was nuts, but after seeing this movie, I tend to agree with her. I’m staying away from films like these from now on! Go see Veggie-tales instead of this! hehehe… Singing vegetables are not scary, and the lines in that are actually funny!

Michelle, age 15
I used to have a sort of confidence in movies that everything would pull together, and if it didn't, it was my own unattentiveness and that I just “missed it.” But after seeing this movie twice, (once in anticipation, once in hopes of clearing my confusion), I have come to terms that it isn’t always that way. For instance, either time I watched this flick, those two characters who left the house in the beginning were never to be heard from or spoken of ever again. And I couldn’t figure out if the blonde guy was truly serious in his “California surfer-bum” accent or just trying to be studly in front of Theo. All in all, the effects were cool, the acting was horrible and script was an afterthought, but my little sister loved it! I think preteens will enjoy this film more than adults looking for a thick-plotted thriller.

Michelle, age 17
I thought this movie, from a Christian perspective, was somewhat galling. To think that all these people were living in a haunted house all by themselves; what were they thinking? I found the role of the doctor somewhat banal and lacrimose. Where do they come up with such flawed script writing? I weakly recommend this movie for other Christians everywhere. Beware: the weak screenplay is more scary than the effects!!!… Ha ha ha!!!

Crazy Carl, age 15
I have to disagree with a few of the reviewer’s comments-chiefly, that this movie isn’t so bad people would watch it just to heckle… which is exactly why I saw it a second time (for free). A good rule of thumb with “The Haunting” is that when the special fx are the most dazzling, innovative, etc. directly coincides with undoubtedly the worst lines in the movie. Absolute groaners. Secondly, the reviewer hints that Catherine Zeta-Jone’s character of Theo is a “token” bisexual. This is not the case. The character in the original adaptation was also bisexual. However, because ACTING and DIRECTING were things left alone in this remake, all we get is… what we get.