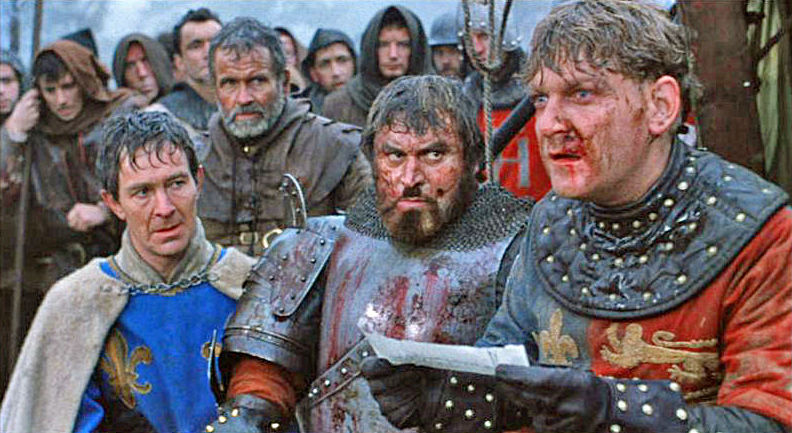 for a bloody battle. 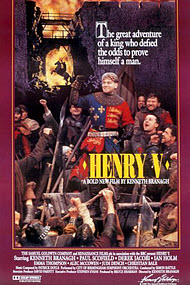 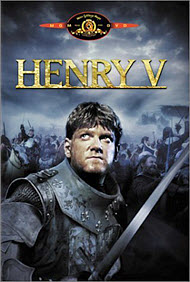 Adaptation of a Shakespearean play

“Henry V” is a tale of honor, perseverance, loyalty, and romance. King Henry the Fifth of England (Kenneth Branagh), thinking he has a right to the French throne, matches military forces against the French. The English forces are out numbered nearly 5-1, but they love their king and are willing to lay their lives down for him.

In his play, Shakespeare calls Henry the Fifth the “mirror of all Christian kings.” This film shows seldom seen or heard tributes to God and his sovereignty. Henry’s trust is in the Lord for the outcome of the battle.

The extent of the bad language in this film is the use of the word bastard occasionally. Near the end of the film, Henry courts the French Princess Katherine (Emma Thompson). This short and sweet courtship features a proposal that climaxes (to Shakespeare’s and the film writers credit) only with a kiss.

The reason for not recommending this film to younger viewers is a graphic battle scene between the English and French armies. There is also a short scene where a soldier is hanged for stealing, which would not be suitable for young viewers. Also, many children will not understand most of the dialogue, as it is spoken in Old English as it was written.

Kenneth Branagh as Henry the Fifth portrays the king in a breathtaking manner. Henry’s soliloquies, including the famous speech on Saint Crispin’s Day, could not have been better performed. The musical score adds to this film’s excellence.

“Henry V” is both an educational and entertaining film, and promotes many Christian values. Rent this movie for your family to watch, and then read the original play!

Positive
Positive—My favourite version of my favourite Shakespeare play—a classic tale of raw courage, heroism, camaraderie, and victory against the goods, and of course, with more than a slight helping of English patriotism.

Some have complained about it being historically inaccurate, and Shakespeare did indeed take some liberties with the facts, but, by and large, except on a cosmetic level, it’s fairly authentic, and represents the view of history current at the time (about 200 years after the events).

Other have complained about the anti-French bias, but I argue that it was not anti-French to anything like the extent that movies such as “Braveheart” or “The Messenger: Joan of Arc,” are anti-English. These are downright racist, and woefully inaccurate, this is not so guilty on either count.

So those seeking a Medieval movie free of the modern political correctness, bedroom scenes (there are a few double entendres and the occasional innuendo) and anti-Christian bias that blights so many modern Medieval Movies, this is a good choice.
My Ratings: Moral rating: Good / Moviemaking quality: 4½

MedievalGirl, age 26 (United Kingdom)
Positive—From a Biblical standpoint and a Christian worldview, this film is 100% perfect. This, in my mind, is perhaps the greatest movie ever made. This is an excellent film adaptation of William Shakespeare’s play about a king who, dedicated to both God and his country, takes on what one of his top advisors say are “a fearful odds.” Yet King Henry, in the name of “God for Harry, England, and St. George” tackles these odds and triumphs over them.

This is also an unbelievable story of redemption. Not only does the film take from Shakespeare’s “Henry V,” it also includes flashbacks to “Henry IV,” Part 1 and Part 2. In these plays, Shakespeare tells of the redemption of Prince Hal and his transformation into King Henry V. As prince, Henry had been notorious for keeping company with wicked men and hanging out in taverns and brothels. His actions are seen as a disgrace to England and to his father, King Henry IV. Throughout the “Henry IV” plays, Prince Hal comes to realize his responsibilities as future king and ultimately rejects his past evil and repents of his sin. After the death of his father, he comes to the full realization that he must put aside his selfish desires to step up the throne and assume the role of servant to the people he governs. Branagh’s choice to show flashbacks of the “Henry IV” plays contrast the present King Henry V, and show how far he has come. We are made to understand how he has developed as a man and is now ready to lead his country.

In the opening of Henry V, in fact, when the French hear about his intent to reclaim the lands they had stolen from England, they send him a trove of tennis balls to mock him, implying all he can do is play. The French had heard about the reputation of King Henry V in his wild and sinful youth before becoming king. King Henry V, in response to this insult, acknowledges that he has been sinful in the past, but he assures the insulting French messenger that he will requite them for this insult and show them that he has indeed redeemed himself and is no longer that sinful and lazy youth that he had once been.

Morally, this film could not be better. The night before the battle, King Henry V prays to God and acknowledges his past sin but also begs God to give him victory, despite his army being outnumbered five to one. This is one of the most moving and beautiful prayers ever written. The next day, after being told that he has won the battle, Henry V closes his eyes in humility and prayer and says “praise be God and not our strengths for it.” Compared to the wild Prince Hal who had previously thought being king was about what he would get and what he could do, King Henry V realizes that his greatness and everything he has done and accomplished is because of the grace of God. This is an incredibly moving ending to a sublimely beautiful story.

The sole reason for this film’s undeserved PG-13 rating is for a so-called “bloody battle.” If anyone knows about the actual historical event in 1415 or the portrayal of this event in Shakespeare’s play, you’d find that it was just that, a bloody battle. However, the implication that the violence in this scene is graphic or overly bloody in its portrayal is wrong. The PG-13 rating was, in my mind, an overreaction. Far worse and much more immoral films have received PG or even G ratings. A PG-rating would have sufficed. This is not a gruesome or inappropriate movie in any way.

The film—and the play(s) it adapts) is among the greatest writing and storytelling of all time. It possesses a level of morality and literary genius that no contemporary author can rival. It is a story of redemption, nobility, honor, perseverance, and dedication to the Christian Faith. you’d be hard-pressed to find a better movie for family viewing, with just a slight caution about the brief and mild violence.
My Ratings: Moral rating: Excellent! / Moviemaking quality: 5
Nathan, age 25 (USA)