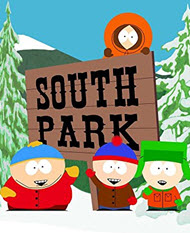 This Comedy Central series centers on the bizarre misadventures of 4 irreverent and foul-mouthed grade-schoolers in and around the quiet, dysfunctional town of South Park, Colorado. The boys are Stan Marsh (a pessimistic “average, American 4th grader”), Kyle Broflovski (a young Jewish boy with a strong moral center), Eric Cartman (loud, obnoxious, amoral, foul-mouthed bully—often anti-Semitic), and Kenny McCormick (boy from an impoverished family). The show uses a very large ensemble cast of over 240 characters. Aimed at a mature audience, but often watched by teenagers, it became infamous for its profanity and dark, surreal humor that satirizes a wide range of topics.


Avoid—No doubt, this show is offensive… so be sure to keep your kids away from it. Of course, it would be a good idea to actually pay attention that the intro of the show specifically states that it is ONLY made for adults, and that kids should not under any circumstances watch. It is shown at 11:00pm or something…so your kids shouldn’t be up anyway. Only watch if you want to see what the world is coming to…
Phillip, age 26
Avoid—I strongly caution parents that if their children are watching this show to have a block put on their TV set. My husband and I were flicking the channels one night and came across this Southpark by accident and I could not believe my eyes and ears. They were blowing kids brains out with guns and blood was everywhere. And this was just after the shootings in Colombine High School. Shame on Hollywood. I could not believe that they could put such horror on TV…
D. Thompson, age 43
Avoid—Where to begin… Constant swearing is bad enough. The episode with the gay dog was awful. The episode with Santa and Jesus beating each other up was heartbreaking. The celebration of this outrageous show in ways Chuck mentioned before me here are enough to nearly make me just want to go buy a cabin in Idaho without a television.

Billy Graham said decades ago that if God doesn’t really punish this society, He’ll owe Sodom and Gomorrah an apology. I’m also reminded of the Scripture that says that if anyone offends the little ones against Him, better that that man have a millstone around his neck and cast in the sea, or something to that effect.
Grant, age 26
Avoid—This cartoon is the most highly offensive show on T.V. today. It is very violent and very crude. The violence is far more graphic than most cartoons. Children should definitely *NOT* watch this show under any circumstances. As an example, every show one of the characters, a nine year old boy, is killed and another character makes a statement like "Oh my %#(*#)! The #*%(&#) killed Kenny." And it gets much worse! I’ve seen many children wearing shirts and I’ve even seen skits performed by Boy Scouts with characters from this show. This show is making an impression on our children.
Chuck, age 35
Comments from young people
Avoid—I urge everyone to avoid this shameless piece of nonsense. The content was never less than utterly offensive. The disgusting tolerance of homosexuality and the constant violence and swearing made me feel sick. This should be banned straight away.
David Taylor, age 14
Avoid—I found this show very offensive and insulting, but most of all, it made me wonder about the next generation. 4 third-graders use language that they have no business knowing and I walk around and hear kids YOUNGER than that saying these type of words. I also don’t like the fact that they use the Lord’s name in vain every time Kenny dies. Not recommended for anyone of any age group.
R.Z., age 16
Caution—If people would open their eyes and ears they would see that South Park is a social satire of America. It seems to lack morals, but in fact it mocks those without morals. South Park teaches morality… The show tries to make you feel uncomfortable, so you will challenge your perspectives and maybe, just maybe get a little enlightenment.
Joey, age 19
Caution—I believe with shows like this, it all comes down to how the content is affecting you and those around you. Someone could watch something that doesn’t affect them at all negatively, while another could watch the same thing and it leads them down a corrupted path. This is not an excuse to sin. Rather, it gives us the ability to discern for ourselves if there is any good to come out of something that contains evil within it.

“South Park” should be evaluated based on this as well. I personally am uncomfortable with certain jokes, but these jokes do not harm my spiritual life. In fact, rather than turn me away from God, I find myself being reminded that we live in a broken world, and that I shouldn’t get cocky. When the show expresses a viewpoint I hadn’t considered, I ask myself “Is that true?” and go look in the Bible for answers, coming out stronger from it. See all »

It’s not all black and white, and I feel as though dismissing it and anyone who enjoys it entirely does a disservice to our ability to reason and think clearly. Often, the show portrays evil as a way to mock evil, and even in some of its worst moments, the show tends to say something profound or true about the human condition or society as a whole.

There are things that it does outright endorse on occasion (homosexuality being one), but it shockingly also can swing the pendulum the other way. There’s an episode where Stan, one of the main characters, actually calls out his dad after he divorces his mom and says “I think that when you married Mom, that’s when you became family.” It’s a critique of the ease of divorce in society, and it’s plain and simple too.

In other episodes, they also critique religion, but not always in the way you’d expect. They call out the hypocrisy present in the leaders of the church, which is honestly something Christians should be doing ourselves, but we’ve neglected. It calls out everyone, regardless of who they are, and it does it with sharp satire and wit.

It even spent some time critiquing Dawson’s theory that “If the whole world was atheistic, there’d be no war” by showing a future where factions of atheists were at war with each other! It’s not always a stupid show, and if one looks for it, they can find episodes full of a surprising amount of wisdom, or at least a good starting point to think about issues more thoroughly.

It is certainly not for everyone, and it’s certainly not for children. If you feel convicted to stay away from this show, do not watch it. But I hope that this comment can show others why I feel it isn’t something to avoid completely.

If you believe it is or could be good for you, I encourage you to look into the episodes that aren’t about trashy topics or supporting evil. There are many of those, and each one can have something to say to the person that watches it. As with all things, keep Christ in mind, and do all things for His glory, not the glory of the self or the world. This goes in both directions. Avoiding things religiously and imposing those restrictions on others is just as bad as licentiously accepting all things as good. Thanks for reading.
Kathleen, age 19 (USA)