“I have read some really touching stories from this site and I feel challenged to share my story with you. I hope that someone reading it will identify with my situation and subsequently be helped in finding deliverance from the bondage of sexual addiction.”

I am 23 and what people refer to as a standing brother. I am a Youth Group Leader, House Group Leader and Lay Pastor in our local congregation, I have a beautiful fiancée, who is 20, and plan to marry hopefully next year. I graduated from College earlier on this year and am now in gainful employment. From this description I am what people refer to as a successful Christian, and I am seen as an example by many.

Despite all of this success, I have had serious problems with my sexual life. I accepted Jesus Christ as my Lord and Savior in 1999 and have lived a happy and stable Christian life until early this year when traces of my past life begun to spring up. I lived a highly immoral life before I gave my life to Christ—sleeping with virtually anyone that I had opportunity with (friends, maids, cousins and girlfriends). 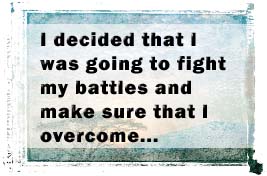 All in all my sexual problems have had severe effects on my relationship with God and with other people. For me to experience freedom I made up my mind that I was going to stop. I decided that I was going to fight my battles and make sure that I overcome and this begun with an acknowledgment of my problem and circumstances. I attended a Christian meeting in which the speaker spoke of the need to get back to God. I did that the very day, though freedom was not automatic.

What I want to say is that no amount of personal effort brings freedom in sexual addiction, no amount of rules and regulations on oneself bring about deliverance from sexual problems. And much worse, no amount of self-pity and self condemnation will help one overcome. What I have found to help is a situation where you acknowledge your helplessness and trust in the greatness of the Lord.

I have tried to stop these habits on my own but it never works. What works is a total reliance on God.

I have ceased to try and stop and all that I have resolved to do is to look to God. The story of Joshua and Caleb is the best example, while situations show that you are like a grasshopper in the eyes of the sexual addiction, deep inside God speaks to you and says you are well able to overcome.

“He who began a good work in you will carry it on to completion until the day of Christ Jesus.” —Philippines 1:6

“Yet to all who received him, to those who believed in his name, he gave the right to become children of God” —John 1:12

It is this right that is our guarantee that we are well able to overcome any addictions. As you read this today, put your trust in the Lord. Put your faith in the Lord and you will overcome. I pray that the Power of God moves in your life. AMEN