What Can 792 Teeth
Tell Archaeologists About Ancient Israelites? 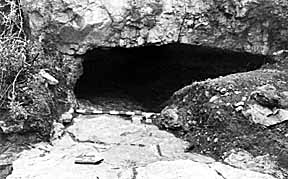 The entrance to the tomb cave is shown here.

An ancient tomb recently uncovered at Khirbet Nisya, eight miles north of Jerusalem, was found with hardly a bone intact. Yet, through careful excavation, this burial cave tells an amazing tale about the people buried there. The tomb dates to the time of the Book of Judges in the Bible.

As might be expected from a damp cave, bodies buried 3,200 years ago had long since returned to dust. But precise excavation recovered evidence of each individual—their teeth, 792 in total! Carefully, dentist Austin Robbins organized the teeth into individuals and determined 51 individuals were buried in the cave.

Apparently unknown and untouched by man for 3,200 years, the tomb was rediscovered by archaeologists from the Associates for Biblical Research in 1985. A natural limestone cave, it was utilized as a family tomb for approximately 200 years. Based on items found in the tomb, it is dated to the early 12th century B.C., the time of the Book of Judges.

These individuals were placed on the floor of the cave without being covered by earth or in a coffin. They were laid to rest with a variety of funerary objects including household pottery, jewelry and weapons. 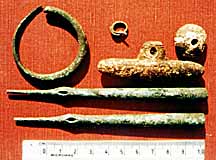 Ancient jewelry and other items from a cave tomb dating to the period of the Biblical Judges.

Later, when another body was brought for burial, remains of the last body were pushed to the side of the cave. The tomb became a cemetery and the basis of the Biblical phrase “they were gathered to their fathers.”

But these teeth had even more to say. They suggested life was hard in those days. Nearly one quarter of the population did not reach age 10. Almost half died before they were 40, and only four reached age 60.

Striking similarities in wear configurations implied a very stable uniform diet throughout the period the cave was used. No major changes in eating habits occurred during the lifetime of these people. The “flat plane” wear was typical of grain eaters; and the high degree of wear indicated a relatively coarse diet, probably wheat and barley. These people really had to chew their food!

This dental-wear pattern also suggested only occasional use of meat in their diet. Yet, archaeological remains from ancient village houses in the region suggest they regularly kept flocks of sheep and goats. These animals were far more valuable to their owners alive, than as a meal. Their value included milk, yogurt, cheese, wool, hair and manure; as well as their ability to reproduce.

Dental analysis even shed light on the stature of these people. Jaw bones fragments suggest the average height of males was about 5 feet 6 inches [1.6764 meters].

The inhabitants of this cave were probably Israelite villagers. While our investigation of their tomb suggested they seldom ate meat, the Bible indicates it was central to their sacrificial system. Thus, they gave what was special, not commonplace, to God. Furthermore, offerer and family were often allowed to partake of the sacrifice, themselves. Such a special treat explains why their religious festivals were joyous affairs.