What is the truth regarding the controversial tunnel beneath the Muslim mosque on the Temple Mount in Jerusalem, Israel? 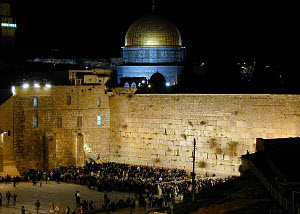 Most of the world is now familiar with the explosive events which took place in Israel during September of 1996. This occurred the same time as our excavation at Khirbet al-Makater, led by ABR Director Dr. Bryant Wood. We were in the country while all the commotion took place, and we found it very difficult to get accurate information on the exact issue which ignited the violence. Most news stories we heard suggested the issue was an underground tunnel newly discovered by archaeologists in Jerusalem or the opening of a tunnel that went directly beneath the Muslim Haram Al-Sharif (the Temple Mount). It was only after arriving home that we were able to get clarification. As far as I can tell, most media outlets never did get it correct. This is what really happened.

The underground tunnel at the center of the controversy was known officially in the 1980's as the “Western Wall Tunnel.” Unofficially it was called the “Rabbi's Tunnel,” because it was the project of Orthodox rabbis in Jerusalem. Work on the tunnel began shortly after the Six Day War in 1967, under the Ministry of Religious Affairs. The rabbis did not discover an ancient tunnel, but dug their own narrow horizontal mine. It started from the area of the Western Wall plaza (also known as the “Wailing Wall”) and ran north along the outside of the western wall of the Temple Mount compound. The Temple Mount, which now houses the Muslim shrines of the Al-Aqsa Mosque and the Dome of the Rock, was refurbished by King Herod as part of his renovation of the Second Temple. While the rabbis worked with government knowledge, there was little government oversight. Professional archaeologists also had little interest or involvement in the project.

As they tunneled north along the Temple Mount's western wall in 1982, the rabbis found an ancient sealed underground gate. They broke through the gate and began to clear out chambers beneath the Temple Mount. Reports suggest they were looking for evidence of the Ark of the Covenant and the Holy of Holies from the ancient Jewish Temples. Palestinian workmen on top of the Temple Mount compound heard the sounds of their digging up through a cistern. They opened the cistern and rushed down. In an area where the cistern and gate complex came together, they found the Jews clearing out the gate room and passageways beneath the mount.

A Palestinian riot resulted with numerous injuries. The Israeli government stopped the work beneath the mount and sealed the underground gate. Yet, the rabbis were allowed to resume their digging northward along the outside of the western wall.

By the late 1980's, they reached the north end of the Temple Mount compound. At this point, they also connected with a pre-Herodian second and first century BC—the Hasmonean period) water tunnel north of the Temple compound. With the discovery of this ancient rock-carved water system, the whole tunnel officially became known as the “Hasmonean Tunnel.” The project was finished in 1988, when the tunnel was stabilized and opened to tourists. While tours were not widely advertised, over 10,000 tourists a year have walked the underground tunnel since 1990. 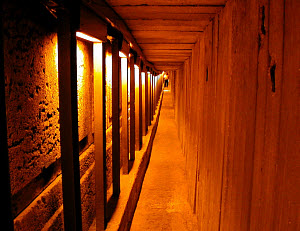 I personally led a group through the tunnel in 1992. The only problem with the tour was, after walking the 400 yards to the north end, you had to retrace your steps back to the entrance to get out. For years, the Israeli government has considered opening an exit on the north end, but fear of Palestinian reaction has kept this idea on the shelf. The new government under Prime Minister Netanyahu decided to open the northern gate in September 1996. This new exit opened onto the Via Dolorosa (the “Way of Sorrows”—the traditional road Jesus took to the Cross) in the Muslim quarter of the Old City.

Unfortunately, Palestinian reaction led to the worst violence in Israel since 1967.

Amazingly, this was not a new archaeological discovery. Neither did it go beneath the Temple Mount or affect the Muslim holy places. Furthermore, it has already been open to tourists for years. What set off all the violence was simply a new exit opened at the tunnel's northern end.

The Temple Mount compound is an emotionally-charged holy site for both Jews and Palestinians. Both make ancient religious and modern political claims on the site. Unfortunately, resolution of their disagreement doesn't appear likely. For now, both sides need to respect the other's concerns and exhibit some tolerance. Sadly, even that is a long shot.

Copyright © 1996, 2009, Associates for Biblical Research, All Rights Reserved—except as noted on attached “Usage and Copyright” page that grants ChristianAnswers.Net users generous rights for putting this page to work in their homes, personal witnessing, churches and schools.