How many sons did Jesse, the father of King David, have? 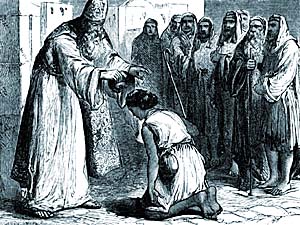 David is anointed by Samuel, as seven brothers and his father watch.

1 Samuel 16:10-11 clearly implies that Jesse, the father of Israel's King David, had at least eight sons, of which David was the eighth. But 1 Chronicles 2:13-15 indicates that Jesse had only seven sons, and that David was the youngest. Which text is correct? How many sons did Jesse really have? And how can the Bible be trusted if you read one thing in one place and a totally contradictory statement in another place?

Both texts are no doubt correct. It is most likely that one of Jesse's sons died before making any significant impact during David's reign—thus being of no account to the chronicler.

You will note that 1 Chronicles 2:13-15 does not state that Jesse only ever had seven sons. It simply names seven of his sons (including David) and two of his daughters.

If one of Jesse's sons had died before being married, or without having had any children of his own, or without having ever done anything particularly noteworthy, it would not be unusual for his name to be omitted from the written record in 1 Chronicles. Even today it is often common practice (except in formal genealogical registers) to refer to only the surviving children.

The two texts in question here do not constitute a necessary contradiction. Therefore, this difficulty is resolvable and cannot be legitimately used to cast doubt on the trustworthiness of Scripture. Therefore, the case for the authority of the Bible as an inspired, accurate, and inerrant revelation from God remains intact.

A significant number of Bible texts really do seem (at least initially) to pose a challenge to the claim that the bible is 100% reliable. But every one of those “problem” texts has long since been uncovered, carefully considered, and resolved in an intelligent and reasonable manner. No new Bible difficulties are about to be revealed.

Here are a few principles to keep in mind as one approaches Bible texts that appear problematic:

More Information About the Bible

Copyright © 2002, AIIA Institute and Films for Christ, All Rights Reserved—except as noted on attached “Usage and Copyright” page that grants ChristianAnswers.Net users generous rights for putting this page to work in their homes, personal witnessing, churches and schools.