What is the legal and moral role of the Bible and Christianity in the U.S.A.? Should God be separated from American government? 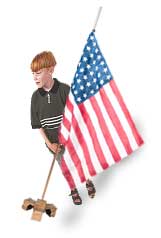 The Bible, and Christian principles in general, are being censored from our public schools—in fact, from the whole “public square.” Under the guise of adhering to the “separation of church and state doctrine,” judges and other government officials are disallowing Christianity in the growing number of arenas administered by the United States government.

The censorship is swift and complete, effectively compartmentalizing the church’s influence in the world. As John Eidsmoe says,

“Those who object to Christian expression in public life frequently use the phrase as a code-word to mean, separation of church from reality. They say, ‘Christians can stay in church and pray and sing, but leave the real problems of the world to us’.”

As Christians, we realize that the real problems of the world can only be solved with reference to Biblical Christian principles. But recently Christians have been told that such an attitude is “unconstitutional;” that the First Amendment to the United States Constitution includes a clause that calls for the separation of church and state. Many people now espouse the belief that American government was designed to include “an impenetrable wall” separating church and state.

If this is true, then the Christian is violating the founding principles of our country when he or she calls for Christianity to be voiced in the public square. But is it true?

Absolutely not. The First Amendment does not include the phrase “separation of church and state.” It reads:

“Congress shall make no law respecting an establishment of religion, or prohibiting the free exercise thereof; or abridging the freedom of speech, or of the press; or the right of the people peaceably to assemble, and to petition the Government for a redress of grievances.” 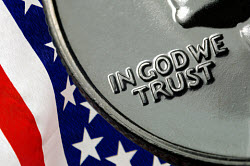 Nowhere does the First Amendment suggest that Christianity cannot be heard in the public square.

Robert L. Cord accurately describes the true intention of the religion clause in the First Amendment:

“[R]egarding religion, the First Amendment was intended to accomplish three purposes. First, it was intended to prevent the establishment of a national church or religion, or the giving of any religious sect or denomination a preferred status. Second, it was designed to safeguard the right of freedom of conscience in religious beliefs against invasion solely by the national Government. Third, it was so constructed in order to allow the States, unimpeded, to deal with religious establishments and aid to religious institutions as they saw fit.” 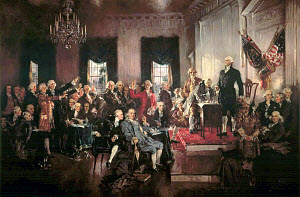 The founding fathers did not include the First Amendment in the Constitution to disallow Christianity from influencing state-established institutions; on the contrary, America’s founding fathers expected our nation to be (on the whole) Christian, and our government to reflect that bias.

This appears to be a reasonable understanding of the First Amendment—far more reasonable than asserting that it erected an impenetrable wall of separation. And it becomes even more reasonable when one considers the words and actions of America’s settlers, founders and leaders.

The first act of the United States Congress was to authorize the printing of 20,000 Bibles for the Indians. Further,

“When our first President, under the new Constitution, received the request of both Houses of Congress concerning a national declaration of a public day of Thanksgiving and Prayer, ‘George Washington… issued a National Thanksgiving Proclamation’ without any apparent concern that he might be mixing government and religion.”

The men who founded our country clearly wedded it to Christian principles. “By today’s standards,” as syndicated columnist Don Feder says, “the founding fathers were the religious right.”

“This Christian consensus is easily verified by the fact that prior to 1789 (the year that eleven of the thirteen states ratified the Constitution), many of the states still had constitutional requirements that a man must be a Christian in order to hold public office.”

This Christian consensus was understood by leaders long after the American Revolution, as well. Abraham Lincoln, in 1863, called for a “National Fast Day,” citing the fact that…

“We have been the recipients of the choicest bounties of Heaven …But we have forgotten God.”

When one examines history, one cannot avoid the conclusion that America was founded on Christian principles and the assumption that her citizenry would adhere to those same principles.

Unfortunately, the modern interpretation of the First Amendment ignores historical fact. Instead, it provides a convenient vehicle for Secular Humanism to achieve control over the public square.

The reason for this is simple: there is no such thing as a value-free society or institution—someone’s values must prevail. Some worldview must “fill the vacuum” left by the eradication of the Christian worldview from public education, social services, courtrooms, etc. By distorting the First Amendment, the United States government has allowed Humanist values to prevail. As LaHaye pointed out,

“The true meaning of the first amendment has been turned on its head during the past fifty years: In this decade, those who practice the religion of Secular Humanism are able to use the power of the federal government to impose their religion on the vast majority of the population.”

The danger of Secular Humanism prevailing in our society is quite simply, the oldest danger recorded in the Bible: men setting themselves up as God. The moral framework of our universe guarantees terrible consequences for the country that grants sovereignty to something other than God—because in such circumstances sovereignty ultimately becomes the property of the state.

“Man is a spiritual being;” says Benjamin Hart, “when one faith is eliminated, a new god will rush in to fill the spiritual void. Through out history, there has been a man-made god called the state.” When the state holds ultimate authority, government officials may commit whatever atrocities they like, because only the state may determine what is right and wrong.

America must choose. Either we ignore the intentions of our founding fathers and grant sovereignty to the state (clearing the way for Hitlers and Stalins to reign once again), or we bow humbly before the one true God, and—without establishing Christianity as the mandatory religion for all citizens—obey God’s principles for justice.

True freedom can only exist in a land governed according to the principles set forth in Romans 13:3-4:

“For rulers hold no terror for those who do right, but for those who do wrong. Do you want to be free from fear of the one in authority? Then do what is right and he will commend you. For he is God’s servant to do you good. But if you do wrong, be afraid, for he does not bear the sword for nothing. He is God’s servant, an agent of wrath to bring punishment on the wrong-doer.”

Copyright © 1995, 2002, Summit Ministries, All Rights Reserved—except as noted on attached “Usage and Copyright” page that grants ChristianAnswers.Net users generous rights for putting this page to work in their homes, personal witnessing, churches and schools.