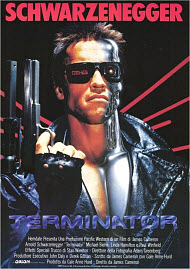 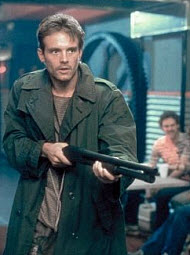 “The Terminator” series paints a rather bleak picture of the future of mankind. What’s the truth? Is there HOPE for humanity? Answer

This ground-breaking Sci-Fi film is known as “The role Schwarzenegger was born to play.” Arnold wisely declined the “starring” role of Reese and opted for the title role instead.

In 2029, at the end of a war between humans and a network of AI computers, the computers send a Model T-101 Terminator Cyborg (Schwarzenegger) back to 1984 to change the future by killing Sarah Connor, the mother of the humans’ leader, before he can be born. Since only living things can be sent through time, they send a Terminator covered with living tissue rather than a naked, C-3PO type one. The humans send a Protector back in time, to counteract the Terminator. Who will get to Sarah first?

The film contains several actors who will become James Cameron “repeaters.” Besides the obvious ones, watch for Bill Paxton in a punk hairdo in the opening sequence.

Technical: Compared to Cameron’s later work, including the 1991 sequel, this is positively low-budget. Many of the shootings and car-chases are done with quick cutaways. And the stop-motion animation of the full-body Terminator robot isn’t materially different from that of the skeletons in “Jason and the Argonauts.” My, how we’ve been spoiled since then by CG effects. But Cameron’s eye for developing sympathetic characters within an atmosphere of conflict, and for strong female leads, shows through nonetheless.

Blasphemous Christological Theme: Kyle Reese (Michael Biehn) represents both Gabriel and the Holy Ghost; he comes as a messenger to tell Sarah (Linda Hamilton) that she’ll have a son who is to be the savior of mankind (see Luke 1:26-35). He even tells her her son’s name. [Spoiler: He also has something to do with her son being conceived.] And the enemy waits to kill her child as soon as he’s born (Rev. 12:4), if not sooner. This apocalyptic message begins to convert Sarah from a semi-airhead into the warrior that she’s prophesied to be (and that she’s blossomed into in the sequel).

Content Warnings: The Terminator cold-bloodedly kills several people including Sarah’s roommate, two other women named Sarah Connor, seventeen police officers, and assorted innocent bystanders. The profanity is extreme; even the Terminator is programmed to use profanity so he can pass for a human (played for comic relief). There are a couple of simulated sex scenes, one including visible nudity and touching. Some gross-out scenes as the damaged Terminator performs operations on himself. The final showdown sequence was the most relentless of its type ever put on film up to that time, but Cameron has topped himself since then.

I can’t recommend this as good entertainment; but for those who enjoy this type of film it’s “good of kind.”

Neutral
Neutral—I saw this movie (Terminator trilogy) with my kids (11 and 13). The key for me was to limit the movie influence on my children and, at the same time, cautiously expose them to the elements of the movie which affected our culture, so they would be more aware of our culture’s values which might affect them (“know your enemy” kinda thing). To do so, to filter out all bad from the movie and kept valuable stuff, I used the movie editor that comes free with Windows and edited out all profanity, gore and nudity. I made R rated movie family-friendly, and showed now a PG rated movie to my kids. As a most popular movie of all times, it gave me a chance to talk to my kids about moral values of my generation, the aspects which affected the production of this movie and widespread acceptance of it, progress in the world of technology and many other related topics. Most striking was to see how Christianized Terminator became in comparison to Terminator 28 years earlier. For old one, I had to remove so much, and for a new one I hardly had to filter anything out. I sense that it is the tendency for our culture, in general.
My Ratings: Moral rating: Average / Moviemaking quality: 4

Vladislav Valentinov, age 35 (USA)
Negative
Negative—There are plenty of science fictions films that offer a downbeat view of the future, and this is another of those. This is very violent; the story seems to enthusiastically glorify the bloodshed. The lead actress (who was also the lead on TV’s “Beauty and the Beast”) is interesting to watch as she goes from being bewildered to becoming plucky. Otherwise, there’s not much to recommend about this film, unless you are a die-hard “Arnuld” fan. The end of the story is particulary depressing.
My Ratings: [Very Offensive / 2]