for strong sci-fi action and violence, and for language 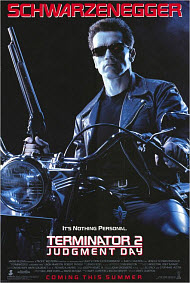 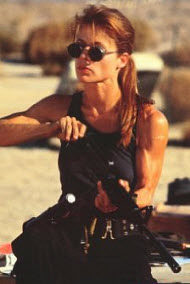 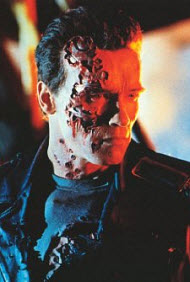 “The Terminator” series paints a rather bleak picture of the future of mankind. What’s the truth? Is there HOPE for humanity? Answer

This sequel tops its original in all departments. The opening sequence of war between the humans and the computers in 2029 is a much more convincing version of the corresponding sequence in the first film; the naked Terminator robots are now CGI.

The Terminator (Arnold Schwarzenegger) promised: “I’ll be Back.” And he is, reprising that line and doing the motorcycle-and-sunglasses bit. Other reprised lines: “Drive,” “Get out,” “Come with me if you want to live.” But not all these lines are spoken by the same characters as in the original. that’s because (as most fans of this genre already know) the opening scene of a Terminator sent back in time by the computers and a Protector sent by the humans is deliberately deceptive. Until the point that both those time-travelers find young John Connor, the possibility is held open that Arnold’s character is the computers’ representative and the normal-sized Robert Patrick’s character is a human. But in reality, The Schwarzenegger Terminator (model T-101) was captured and reprogrammed by the adult John Connor. it’s Patrick’s character that’s the computers’ representative, a new T-1000 Terminator made of morphing liquid metal. it’s physically stronger than the T-101, and it can take the shape of anything it touches (the morphing technology is thoroughly convincing). So Arnold gets to play the “good guy” this time around. A viewer tricked by the opening sequence would have to go back, review it, and realize that the T-101 didn’t actually kill anyone after coming through the time warp but the T-1000 probably did.

Although this film was released in 1991, it’s set in 1994 or ’95, when young John (Edward Furlong) is 10. His mother Sarah (Linda Hamilton), who has escaped one Terminator assassination attempt and knows that there may be another someday, has become a social misfit. She’s worked hard to learn military and survival tactics (by running guns in Latin America etc.) and to teach them to her son, the humans’ future leader in the war against the machines. Since the only people she fits in with are paranoid survivalists, most of whom really ARE off the deep end, an outside observer might assume that she—with her stories about Terminators and Judgment Day—is crazy as well. Sure enough, she’s confined to a mental hospital; and even her son doesn’t believe her story—until the day the Terminators show up.

This is a very different Sarah from the one we knew in the first film. She’s self-sufficient; resourceful; lean and muscled. Her tourist-guide Spanish is replaced by the real thing. And although she’s not a killer, she’ll do whatever it takes to (1) try to stop Judgment Day from occurring or, failing that, (2) get John ready for his destiny.

The story of Judgment Day, by the way, is: A superfast computer system called Skynet replaced human decision-making in the United States’ strategic defenses. Then the network became “self-aware” (AI), the humans tried to pull the plug, and the computers retaliated with nukes. This is very similar to the plot of “Colossus: The Forbin Project” (1969).

The action is nonstop (except for some PC propaganda) and there are some dangerous stunts and eye-popping effects.

There are some technical oversights. There should have been explanations of how the T-1000 could pass through the time warp (a one-cell-thick coating of living tissue, which he later shed?) and of how it can mimic human beings of different body sizes (vacuoles?). But screen time is expensive, and I suppose most people don’t take those points too seriously.

Sarah is mistreated at the hospital. Dr. Silberman (Earl Boen), a holdover from the first film, is still a thick-headed bureaucrat who doesn’t understand what he’s dealing with. And an orderly sensually licks the side of Sarah’s face while she’s in restraints, then disturbs all the patients on the ward by scraping his nightstick along the hall wall. what’s that all about? Just a male bimbo image, I guess. At one point Sarah decides that she’s become expendable because John now has the T-101 to protect him; a Terminator is much better then any human father because he’ll never be too busy to spend time with John, never get angry and hit him, etc.

In this outing, neither of the Terminators is programmed to use profanity; but the T-101 picks some up from John as part of his training to become “more human.” And Sarah has a very filthy mouth.

The violence is extreme. The T-1000 kills without hesitation, the way the T-101 did in the first film. The T-101, under special orders from John, never kills anyone; but he blows up anything that’s in the way, and he takes out innumerable police officers with leg wounds, done for laughs. “He’ll live.”

Sarah has a dream sequence where she’s watching herself (played by Hamilton’s twin sister) and some children playing in a park, and they’re all killed by a nuclear attack that levels the entire city. don’t watch that sequence late at night.

The ending involves self-sacrifice and (of all things) an anti-violence message!

The Cameron trademarks of bigger-than-life action, strong female characters, and long-drawn-out climaxes are all here. If you’re mature enough so that watching this won’t brutalize your spirit OR make you weep over the “death” of a machine, great. Not everyone is that well-adjusted.

Negative—Whoa… I didn’t think it was more possible to add more violence to this story, but it happened! I guess the producers and screenwriters figured they couldn’t have another hit without Mr. S., so they make his character a good guy this time. The villain is truly scary. However, I found it hard to have sympathy for Sarah this time, who’s character appears to have had a mental meltdown, and her son, the juvenile delinquent on whom the future of the world depends. The story has the same depressing tone as the first one, so be warned.
My Ratings: [Very Offensive / 2]