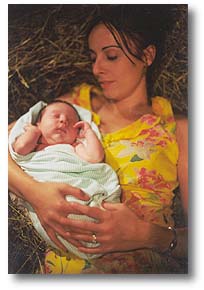 What if Christmas was still in the future? …the Messiah still to come? That’s the thought-provoking theme behind John R. Hamilton’s “Mary and Joe”. In this story, Mary (Erin Bridges) is a 17-year-old high school Brooklyn, NYC senior. Her five-year-older fiance, Joe (Braden Moran), works for a computer/Web design business. The two are committed to moral chastity, part of the “True Love Waits” campaign. That’s why it’s so hard to believe it when the doctor informs Mary that she is—without a doubt—pregnant. Of course, no one believes that she is still a virgin. When Joe finds out, he can’t believe it either and comes very close to breaking off his engagement.

Much like the familiar story from the gospels, a dream sent from God convinces Mary of what is really happening: that she will be the mother of Yeshua, the Messiah—Jesus. And an angel appears to Joe too (quite a humorous scene actually) so that he too can know that Mary is telling the truth. Still, Mary has to suffer embarrassment and isolation heaped upon her from family and acquaintances at school.

“Mary and Joe” offers other interesting thoughts: if Christmas were still to come, would there be a New Testament in our Bibles? Would there be any Christian churches? Would people still curse God’s name by saying “Jesus Christ” if he had not yet been born? What kind of medical testing would be done to prove that Mary was indeed still a virgin, proving without a doubt that the conception is a miraculous event? Would we be living in the 21st century today, or would it be called something else?

This film is rated “PG” and intended for a non-Christian audience. As such, it has a few instances of bad language (nothing over-the-top). There is also some frank talk about sex, though it is not graphic. Technically it comes across as professional, though some of the minor characters are a bit weak in the acting department. Other nits: the musical score could have been much improved upon, and the editing should have been tighter to cut out some of the slower scenes. Still, “Mary and Joe” is recommended to families with older children (you may want to preview it first to be sure it’s appropriate for your kids).

For an excellent book to help you further research how Jesus changed the world, see D. James Kennedy’s What if Jesus Had Never Been Born?. Other great film picks for the Christmas season include “The Fourth Wise Man,” VeggieTales’ “The Star of Christmas,” or from another angle “The Messiah: Prophecy Fulfilled.” (See our Christmas movies page for more picks).