Once Upon a Time in Mexico

for strong violence, and for language 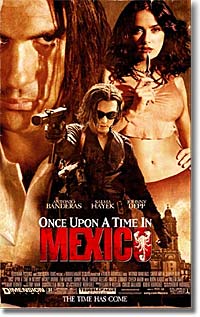 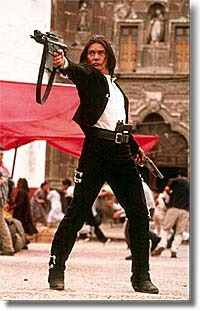 Violence in the media—how does it affect families? Answer

Why does Hollywood continue to promote immoral programming? Answer

In deciding what to lay on your heart and mind before bedtime, here is a “Once Upon a Time” story that you may want to forego before you and your family drift off for a peaceful night’s sleep. While holding some redemptive value, the glut of violence is enough to detract a viewer away from getting much meat off of its bones.

Director/Writer Robert Rodriguez has composed a symphony of gun shots, bloodshed and profanity with “Once Upon a Time in Mexico”, his third of a trilogy beginning with the $10,000 budget film “El Mariachi” and the blockbuster-funded sequel “Desperado”, and adding to his star-studded cast Antonio Banderas, Selma Hayek, Willem Dafoe, Johnny Depp, Mickey Rourke, Cheech Marin, Danny Trejo and Enrique Iglesias.

The hook of the film comes when El Mariachi (Banderas), or “El” as he is humorously referred to, is commissioned to break his vow, pick up guns again and fight. The mission he chooses to accept is exterminate the leader of the drug cartel, preventing a hostile take-over for leadership of Mexico and subsequently avenge the death of his wife and child.

In Pulp Fictionesque fashion, there are some disturbing moments when violence is excessively employed for entertainment and even humor. CIA agent Sands (Depp), in one scene raves about a meal he is having and tells his informant, Belini (Marin), that when he’s done eating he’s going to go back to the kitchen and shoot the cook. Unfortunately, he does. The initial joke is meant to be funny, but what’s even more unfortunate is that the shooting is, too.

Rodriguez has greatly advanced since his original feature “El Mariachi” and has fleshed out a production with a well-developed script, rich production design, classy cinematography, extravagant action, excellent locations, and has still managed to preserve some avant-garde flavor. The film also shows the evils of the drug world and bad guys being brought to justice. We know that vengeance belongs to the Lord; He will repay. You might say there is some divine justice in this story, but El Mariachi and Cucuy (Trejo) are characters clearly motivated by revenge. Even until the end, violence is center stage, and—at least at the screening I attended—the audience rejoiced when the bad guys has his kneecaps blown apart.

Comments below:
Positive
Positive—Great movie! I went in expecting the movie to be horrible but it was anything but that. There was shooting and explosions everywhere. This movie never let you get bored by a plot or any fancy words it was just pure action. I give this movie five thumbs up just because of its super awesomeness.
My Ratings: [Average/4]

Ted Jackson, age 22
Positive—Once Upon a Time in Mexico is about a coup d'etat in Mexico. Being about a coup it is inherently violent and filled with corruption and greed. Johnny Depp plays a cynical CIA agent orchestrating the coup. His performance is memorable and very humorous. The graphic violence and gore of this movie, while not overdone is definitely far to graphic for anyone under 16 or easily upset. I can honestly recommend it as a good film.
My Ratings: [Average/3]

Thomas Kempis, age 35
Neutral
Neutral—Johnny Depp once again steals the show, although the movie would have been much better had he been in it more due to his humorous disguises, love for pork, and witty quips. The first half of the movie is O.K., but the second half is where the movie begins to fall apart and gets much more violent. The action segments are well-edited, and the music is quite entertaining; however, Depp’s excellent acting doesn’t quite make up for the immense violence, bloodshed, torture scenes (involving a drill), and language (the occasional f-word here and there).
My Ratings: [Very Offensive / 4]

Susan, age 25
Negative
Negative—My husband and I love action movies and “no brainer movies.” The beginning of this movie is well done as a spaghetti western, but about the middle of the movie it loses all hope and turns into a torture and gore mess. There is a lot of language and violence, but we typically find out the ratings and reasons for them before we see a movie. Unfortunately, this movie became lost in itself with trying to sicken you—eyes drilled out, knee caps shot off, etc. It went from a good western to a very bad movie, very quickly. Added in the reasons for the R rating it should have included “gore”.
My Ratings: [Extremely Offensive / 1]

T. Jensen, age 32
Comments from young people
Negative—I did not like this movie. It was so bloody and all about shooting down people. Antonio Bendaras’s character wanted to get revenge on people by killing them. It is such a horrible movie, I don’t recommend seeing it.
My Ratings: [Extremely Offensive/1]

Molly C., age 16
Positive—If you liked “Desperado,” you should love “Once Upon A Time In Mexico” (Desperado 2). …Being a big Johnny Depp fan I rushed to see “Once Upon A Time In Mexcio” opening night. I had been excited about this movie for months, and found out I like it more than I imagined. This movie is filled with exciting action and edge of your seat adventure. The story is great and Johnny Depp steals the screen once again with the humor his character adds in the movie. The langage is heavy at parts and there is some perverse use of language. The violence is extreme with lots of gun shooting scenes. I was happy about the sex and nudity. There is none. There is one scene where EL Marachi kisses his wife Carolina (Salma Hayek) on the lips and neck a moves slowly down to her pregnant stomach. There is no nudity, but Carolina is wearing revealing clothes. Overall, I liked this movie a lot, but I don’t recommend this to everyone because of the language and violence. If you like action though, this is the movie for you. Violence: Extreme; Profanity: Heavy; Sex/Nudity: Mild.
My Ratings: [Very Offensive / 5]

Melissa, age 18
Positive—…an enjoyable movie but only if you can piece together the many confusing plot lines. The desperado, El Mariachi, is recruited by a CIA agent to stop a plot by a drug lord to kill the president of Mexico. The CIA agent however, is out for himself, wanting everyone else to die so he can collect the bounty given to the assassin of the president. There are so many different characters and everybody is on a different side,making the movie basically a super violent free-for-all. The movie is very violent, but not in a realistic way; more in an over-the-top, comic-book fashion. Johnny Depp steals the show as the rogue CIA agent, Sands. His final showdown was the most memorable scene in the film.
My Ratings: [Average/4]

Asher Alavi, age 18
Neutral—Now, I’ll start this out by saying that I have never seen Desperado, therefore had never heard of the storyline. In fact, when I first saw the trailer I was certain I would never see this film. However, my brother decided to take me, so I decided that since I wasn’t paying it couldn’t hurt, and I was right. Concerning storyline, when you could pick it out of the violent sequences and rather funny scenes with Johnny Depp, it neither intrigued nor fascinated me. Concerning violence, if you were not expecting anything, it was not bad but certainly could have been toned down. The pagan ceremonies were somewhat disturbing, but as for swearing most of the vile stuff was said in Spanish. Johnny Depp and Antonio Banderas were good, I wouldn’t have cast Willem Dufoe as a Spaniard, and the acting of the rest of the crew was exceptional. Besides being a very loud movie, it was not extremely moral, and kept to the side of the darkness rather than the light. However, given the state of many movie and production companies, it could have been worse. And the lack of real sexual situations was pleasantly surprising.
My Ratings: [Average/3]

Preview Family Movie and TV Review
…Violence for the sake of violence, and a boatload of profanities… It’s confusing. It’s irritating…

Bob Waliszewski, Plugged In!, Focus on the Family
…Pagan worldview glorifying violence… 19 obscenities, most of them strong; violence includes torture…