for brief language and a momentary drug reference. 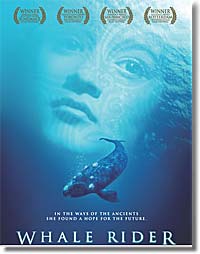 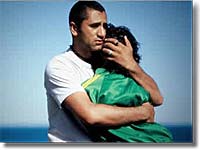 roles of boys and girls

having respect for God’s Creation

Whale Rider is a film about a rejected leader. Paikea (Keisha Castle-Hughes) is the only surviving child of a chief’s son. Her twin, the hoped-for son and future chief, died at birth along with his mother. Her father Porourangi (Cliff Curtis) names her after Paikea, the legendary whale rider who brought their people to New Zealand eons ago. The spiritual law requires that the banner is passed from first son to first son on through the line. Thus, other possibilities, Paikea’s uncle (a second son) and Paikea, will not fulfill the law.

Paikea’s grandfather Koro (Rawiri Paratene) longs for the hereditary grandson who will bring his people light, leadership and truth Paikea’s absent artist-father is not going to indulge his father by creating another son. He knows all too well the dangers of being the hope of his people. His brother and daughter, on the other hand, know all too well what rejection is about.

Few movies have successfully shown the pain of being a rejected child. “Whale Rider” does. Paikea has come into her own and her own (her grandfather) is not able to receive her.

The Bible is full of stories of people who were “the wrong sex.” Zelophehad’s daughters had to plead for their inheritances. Deborah had to go into battle because Barak would not. And this film, based on the novel by Witi Ihimaera, uses an old Maori legend in much the same way a gifted priest might use one of the aforementioned Biblical passages.

Much in “Whale Rider” parallels the Christ story. The audience knows that sooner or later the stone which the builder rejected is fated to become the head cornerstone. The Princess will resurrect to ascend the throne after much humiliation and spiritual death.

There are also other spiritual parallels: the call of the prophet, God’s and the regular folks’ acceptance of the prophet while the upper hierarchy (the grandfather) rejects. But other spiritual aspects of the film might bother some Christians. The honoring of the ancestors might trouble some people, for instance, although there is nothing inherently unChristian in remembering one’s ancestors. The Bible is full of references to great ancestors.

The central portion of this film concerns a male ritual that Paikea is forbidden to engage in. Sly and determined, she learns the rituals anyway. I saw this film in a week when I happened to see two documentaries on non-western tribes. Among other things, those documentaries dealt with the coming of age ritual for male children. It occurred to me as I watched these films that the coming of age ritual in the Christian western world is not as dramatic as in these other countries. The typical western child comes at age in stages: driving lessons at 16, voting, prom night and going off to college or the army around age 18, drinking (for those who drink) at age 21. But there really is no great passionate ceremony that teaches young men what it means to become a man. (Or that teaches a young girl what it means to become a young woman.) The rituals in “Whale Rider” teach that the marks of manhood are courage in the face of one’s enemy, the telling of communal stories through dance, and certain traits of a tribe of former warriors.

In the Western world, manhood seems to be defined as the lifting of certain moral prohibitions (drinking, staying out late, etc.) and the gaining of more freedom and responsibility. But these Western rituals are usually not communally accepted by the community.

This film is excellent and a great reminder for Christians that some of the traditions of the indigenous peoples are wonderful traditions that complement Christianity well. The spirituality of the people and their respect for nature is sensitively told, and never is there a word breathed against Christians—as often happens in some movies.

The audience also gets a good chance to see a culture rarely seen on film. The film is spiritual, but has no blatant agenda, except to tell an old legend. The setting and locale of the film are breathtaking.

Violence: Mild | Profanity: Moderate—“d*mn” (1), s-word (1), “d*ck” (3) | Sex/Nudity: Minor—no nudity, but there are suggestions that the brothers have engaged in premarital sex

Positive
Positive—This was a beautiful movie both visually and story content. Keisha Castle-Hughes is fantastic. As I sat in the theater I felt like I was viewing REAL live, not a movie. I was totally “into” this movie and felt as if I had actually experience the rejection that Paikea felt. I came out of the theater feeling uplifted as if I had witnessed God’s hand on Paikea and Porourangi.
My Ratings: [Excellent! / 5]

Rosalie Gilcrest, age 64
Positive—No dangerous elements It is a family safe and a beautiful movie based on a Maori legend that has everyone in the theater sniffing, blowing or crying with good reason Terrific scenery and acting by the three main actors good choice for good Christian discussion on what you would have done in Paikea’s situation
My Ratings: [Excellent! / 5]

Murray C, age 46
Negative—I didn’t view the entire film, but I watched as much of it as I could take. It was boring. …Fortunately, my kids didn’t understand the slang comment used by the grandfather as he referred to the young men’s sex organs falling off while training them in the traditions of old. There is profanity and drug paraphernalia visible (not just referenced)…
My Ratings: [Average/1]

Charles, Texas, age 34
Positive—Excellent movie! This movie shows no matter how much Paikea was rejected by Koro, she still loved him with all her heart. Koro has a wake up call when he finds out who is the next leader for their tribe. Rejection, forgiveness, and love all in the same movie. Just as God loves us unconditionally, Paikea loved her grandfather just the same and more love for her people. Awesome movie to show and teach about these things and a really good chance to teach to young people these days that need guidance and love all the time.
My Ratings: [Excellent!/5]

Kimberly K. Daffron, age 35
Positive—This was a very good movie about a little girl and her family. I strongly support this movie and definitely recommend that you would see it. It is for all ages even though it is PG-13 (Drama).
My Ratings: [Better than Average/4]

Anonymous, age 30
Neutral
Neutral—When God called David, he was not the one anyone else would have chosen to be a leader. He was young, inexperienced and probably much smaller in stature than many other “qualified” candidates. Paikea faces even more obstacles in that she is a young female, with none to truly believe in her. Yet her persistence in her “faith” showed her whole village that we don’t control our own destiny. Someone fare greater does!

This is an “against the odds” film that will leave you with a sense of purpose and overall feeling good. It was suitable for pre-teens, and possibly a bit younger depending on how well you communicate with your smaller children. Paikea is rather ignored and chastised a few times by loved ones, which could be somewhat frightening to little ones. My wife and I thoroughly enjoyed the film as did my wife’s brother.
My Ratings: [Good / 5]

Danny Jacques, age 45
Comments from young people
Positive—I rate this as one of my favorite movies I’ve ever seen in my life. I’m Native American, and though this film deals with the Native Culture of New Zealand, I can see that a great deal of research and un-bias production was made to create a movie which draws you into a culture and lets you see and feel what it’s really like. Everything is authentic and The story is tear-jerking and heartwarming, and perfect acting by a refreshing and well put together cast makes this film superb.

I felt no offense to my faith at any time during the film and at no time did I feel like the film-makers included racist views toward any other culture. The film also deals wonderfully with sexist views and the life of a rejected child. The only drawbacks I could spot was that the story soared over every child’s head in the theater, and of course the minor language. But other than that, I felt that this film was more than worth the price of admission and deserves every once of praise it gets.
My Ratings: [Excellent! / 5]

Craig, age 17
Positive—This is a great movie, I am a new Zealander and this film was very true to the culture of the Maori people. It is thought provoking, and a bit of a tear jerker. GREAT!
My Ratings: [Good / 5]

Chelle Erin, age 17
Positive—I think that move was the best and saddest movie! It was so entertaining! My Family loved it too. …check it out!
My Ratings: [Excellent!/5]

Jamie, age 13
Positive—I really liked this movie. At some parts it was pretty hard to understand what they were saying because of their strong accents. I likes the storyline of the movie. As a Christian, I think that this would be a movie of all ages.
My Ratings: [Good/4]

Brittany Marie Jensen, age 12
Positive—This was a great film with hardly any objectionable material. Keisha Castle-Hughes was excellent. This movie is deserving of a Best Picture Oscar.
My Ratings: [Better than Average/5]

Tony Chase, age 14
Movie Critics
…So many films by and about teenagers are mired in vulgarity and stupidity; this one, like its heroine, dares to dream…

Roger Ebert, Chicago Sun-Times
…Whale Rider is one of those little movies from far away that hits home everywhere it shows up…

Margaret A. McGurk, Cincinnati Enquirer
…This whale of a film will undoubtedly be remembered as one of the best films of 2003…

E! Online
…boasts a terrific newcomer in the lead role, exquisite widescreen photography and a powerful sense of place…

Sheri Linden, Hollywood Reporter
…Nearly every viewer who sees Whale Rider will leave the theater uplifted and full of praise…