for strong horror violence and gore, sexuality, nudity and language 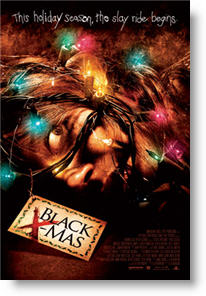 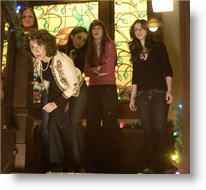 “On the 25th day. Of the 12th month. One man will creep around your house. And leave… no one alive.”

“Black Christmas” is a movie about a group of sorority girls who live in a house where a disturbed young man, Billy Lenz, killed his abusive family years earlier. He was placed in an insane asylum after the murders. However, every year at Christmas he tried to escape. Finally successful, he returned to the house in the midst of a severe winter storm and began killing the snow bound residents one by one.

Billy was born with a rare liver disease that made his skin permanently yellow. His parents hated each other and the mother hated Billy. The only love that was shown to him was from his father. When Billy was five-years old, his mother brought her boyfriend to the house. They immediately murdered Billy’s father and buried him under the house. When they discovered Billy watching them, they locked him in the attic where he stayed until he snapped at the age of twenty and killed his mother and step-dad.

As far as the content, the F-word was used around 35 times, the S-word, 19 times, God’s name in vain, (G.D.) 2 times, and B–ch, six times. The gore shown in the movie was to the extreme. Excessive blood, eyeballs being gouged out of the sockets and eaten, and other things I will get to when I discuss the violence. The sexual content was very disturbing for many reasons. Early in the movie one of the girls is watching a video of a guy and herself having sex. Nothing is really shown here but there is a lot of movement. Later, Billy’s mother is having sex with her husband who then falls asleep while in the act. This leads to one of the most disturbing scenes in the movie. After her husband falls asleep, Billy’s mother hears him upstairs in the attic. She goes up there and has incest with Billy, who is twelve years old at this stage. Later, Billy watches a girl in the shower through the floor boards. Naked breasts and buttocks can be seen, Also through-out the movie the girls are dressed in skin tight clothes, but you will see that if you visit your local mall.

The murders and violence, which starts in the first five minutes of the movie and do not stop until the end, are some of the most graphic images I have ever seen on film. The most disturbing is when Billy kills his mother. He strangles her with Christmas lights then beats her to death with a rolling pin. Once he takes out his anger on her, he then decides that he is hungry. He takes a cookie cutter and cuts flesh off her back, bakes it and eats it with milk. This is the most disgusting scene I have ever seen in a movie because it leaves nothing for the mind, it shows him eating her baked flesh close up.

There is really no spiritual aspect to this movie. The only allusion to any of the girls being Christian was a present a girl gave one of the other girls and mentioned that she knew she liked the “Bible and stuff.” Jesus is not mentioned and God is only used in the context of swearing. There is one guy in the asylum who thought he was Jesus and was quoting scripture out of Matthew 2 about the wise men seeking Jesus. The entire movie depicts a world devoid of the Gospel of Christ and an absence of God’s love. People were giving in to their primal lusts and desires. At no point was there hope in anything or anyone. At various points you almost begin to feel sorry for Billy and feel like his mother and step-father got what they deserved, but we must remember God will exact vengeance and He has not given us that right.

In my opinion, this is not a movie for any Christian or anyone else. The entire movie is filled with images that can affect an impressionable person. This is most certainly NOT a movie for children of any age. I personally feel like they were targeting a teen-age audience. I am a man in my late twenties, and I was thoroughly disgusted with the movie, so I know they were not targeting my generation and older. It holds the distinction of being the only movie that ever has made me want to get physically sick. To me, this was just another attempt to demonize the Christian holiday of Christmas. There are just too many violent movies that come out and are centered around Christmas for it not to be an attack. There is no good reason to watch this movie. I would not recommend this movie to anyone. Skip this if you are looking for a scary movie to watch one weekend.

Negative—DUMB DUMB DUMB!!!… watch the original; the new one was a waste of time!!!…
My Ratings: Very Offensive / 1

Gerry Shamray, Sun Newspapers of Cleveland
…The movie’s one idea of wit is to score scenes of carnage to classic tunes from Tchaikovsky’s ‘The Nutcracker’…

Ty Burr, Boston Globe
…more gore than the original and gruesome nastiness; it is downright unpleasant… Ultimately, the whole thing is a bloody bore.