for strong violence, language and drug use

Reviewed by: Robert A. Kouba
CONTRIBUTOR 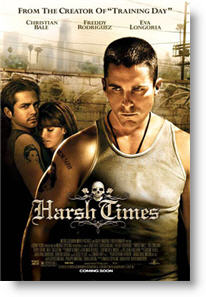 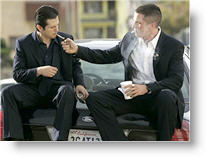 Who knew hunting for a job would be so hard?

Christian Bale plays honorably discharged ex-Ranger, Jim Davis. Plagued by visions of deeds done in Middle East combat zones, Jim is seeking refuge with his wife-to-be in Mexico, Marta. However, the time has come to claim a job assured to him with the Los Angeles Police Department. Jim leaves for the States promising to come back and bring her with him so they can be married.

Jim is not alone in his search however. He drops be to pick up his best friend, Mike Alonzo (played by Freddy Rodriguez), who is trying to get his life together for the sake of his live-in girlfriend, Sylvia. Armed with a handful of resumes, Mike goes with Jim. Jim gets bad news, since his job eligibility has been revoked, so the twosome finds their way back into some bad habits. Of course, Jim is the ringleader, with Mike a reluctant participant (but a participant nonetheless). Beer, drugs, petty theft, a conflict with an ex’s boyfriend, and the two are soon plotting to sell a stolen gun while they try to drown out broken dreams in a steady stream of alcohol and marijuana.

A phone call interrupts the two when Homeland Security asks Jim for a drug test the next day. Jim downs a bottle of vinegar and replaces his urine via a homemade catheter made out of a poultry baster. Jim’s comment on the experience? That was unpleasant.

Jim gets a job but is given the news that he should not get married since it might lower his security clearance and he is going to have to move to Columbia. Mike also finds work and things seem to be looking up until the two grab another friend and head to Mexico before Jim heads out. Marta reveals to Jim she is pregnant and the pressure starts to cause a mental breakdown in an already unstable personality. Mike is able to snap Jim out of it and they are able to make it back to the States.

After dropping off their friend, Jim says they need to run somewhere first. When asked where, he divulges that he has drugs in the trunk from Mexico. Mike freaks out but goes along as Jim starts to lose his grip. The drug exchange goes smooth until a run in with the ex he tussled with before. Jim snaps and kills everyone. However, during the escape, Jim is wounded by shotgun blasts. Mike wants to take him to the hospital. Jim says no and encourages Mike to shoot him instead since he can’t do it himself. Mike refuses until he sees that Jim is shot in the head (you can actually see skull I believe). Mike finds the will to do it and goes home to his girlfriend.

“That was unpleasant” is a good comment for the content of the movie. I counted 80+ expletives of all shapes and sizes in the first half alone, until I realized I had to pay more attention to how many words there were than to the movie itself. Alcohol and drugs are abused. Guns are glorified. A man is smashed with a bottle, and his throat is cut. Women are talked about in a degrading way. A Playboy is looked at (although we don’t see the inside). Sex is inferred. War violence is portrayed though night vision, as Jim stalks though a trench, shooting everyone at point blank range. Jim’s anger is uncontrollable at times, and he starts to attack a motorist. Jim plots to kill two cops that are pulling them over. Petty theft and robbery are perpetrated.

Spiritually, Jim gestures the cross over his heart before he attacks his enemies in the Middle East. He also kisses what I think is a cross around his girlfriend’s neck. Other than that, I think that most commandments are broken multiple times during Jim’s downward spiral. One thing that is in conflict in the movie is loyalty to friends versus loyalty to family. Jim plays the best-friend card in order to get Mike away from his “family” (his girlfriend). It is then interesting that the person they visit in Mexico is Jim’s “family.” I think selfishness and how it plays into the breakdown of relationships as well as family roles of men and women and how they are handled in the movie are both subjects worth discussing.

Director/writer David Ayer’s first directorial debut is gritty, and I definitely see the influence of “Training Day” (which he also wrote). Like “Training Day,” this film also relies on its two main stars and both come through. Bale is able to shift gears from the old school “homie” to the disciplined soldier to the “American Psycho” with ease. Rodriguez also shines as the best friend who is getting caught up in the detrimental lifestyle of another. It is almost like he can see the end coming, but can’t figure out how to avoid it.

In closing the film is an interesting character portrait and the actor’s have strong performances, but the movie does not really offer any wholesome entertainment to speak of, so I cannot recommend it.

Neutral—I watched this film by chance when I was at a non-Christian friend’s house. He had received the DVD as a birthday present and suggested we watch it. The blurb on the DVD case read, “From the Makers of ‘Training Day’,” a film that had impressed me due to Denzel Washington’s tour-de-force performance, so I consented to watch. The similarities with Training Day were apparent: the gritty realism of LA’s streets, the coarse dialogue and the relentless violence. This movie also boasts a strong central performance from the reliably impressive Christian Bale (cf. “Batman Begins,” “The Prestige,” “American Psycho,” et al). But it is these similarities that make the viewing experience an altogether disappointing one. Although writer/director David Ayer has added some contemporary resonance to his subject matter (with his self-destructive protagonist having recently returned from service in the Middle East, hardened against the harsh but relatively tame environment he once again inhabits) the subject matter and the themes that he explores (i.e., the consequences of one’s choices and the triumph of righteousness in the face of immorality) were better handled in his previous film, making this seem a bit too derivative. If you’ve seen “Training Day,” give this one a miss.
My Ratings: Very Offensive / 3