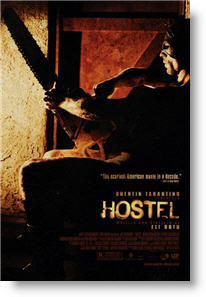 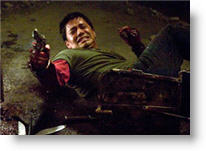 Here’s what the distributor says about their film: “Two adventurous American college buddies, Paxton and Josh, backpack through Europe eager to make quintessentially hazy travel memories with new friend Oli, an Icelander they’ve met along the way. Paxton and Josh are eventually lured by a fellow traveler to what’s described as a nirvana for American backpackers—a particular hostel in an out-of-the-way Slovakian town stocked with Eastern European women as desperate as they are gorgeous. The two friends arrive and soon easily pair off with exotic beauties Natalya and Svetlana. In fact, too easily. Initially distracted by the good time they’re having, the two Americans quickly find themselves trapped in an increasingly sinister situation that they will discover is as wide and as deep as the darkest, sickest recess of human nature itself—if they survive.

…More grisly than Eli Roth’s feature bow (“Cabin Fever”), “Hostel” is a mixture of many of the most terrifying things about human nature and the world at large, culled from many impossible-but-true stories of human trafficking, international organized crime, and sex tourism. Relentlessly graphic and deeply disturbing…”

Neutral
Neutral—In one word: NIGHTMARISH. You are taken through Amsterdam as Paxton, Josh, and Oli try to find drugs and sex, and instead, disappear, one… by… one. The torture in this film is horrifying, brutal, and rather believable.

Is the whole movie entirely unnecessary and stupid? I don’t think so… Maybe too much, yes; it certainly does and emotional toll on you after the show. (I’ve heard that during the first screenings there were trails of vomit leading out from the theatre.) Very dark. A literal reenacted nightmare. Terrifying. If you want to see a real cinematic nightmare, see this one. NOT for kids. Not for anyone under 15.
My Ratings: Moral rating: Better than Average / Moviemaking quality: 4½

Jesse, age 19 (USA)
Negative
Negative—I found the movie to be extremely gruesome and morally unexecptable. With more gore and sexual content than I have ever witnessed in a film, …for no one who wishes to sleep well that night.
My Ratings: Extremely Offensive / 5

Stephen Puckett, age 18
Negative—Let me begin by saying that I am a fan of horror movies, particularly those which deal with monsters that are not real because I can walk away from them without having to think about such events as I have just seen ever happening in real life. However, I was drawn to this movie by the internet buzz about it, but after having seen it I should have spent my money on something else. The movie is well made and the scenes of torture and brutality are quite believable, which is why I would rather have skipped this movie.

To think that there might actually be people who would pay tens of thousands of dollars for the opportunity to torture and kill innocent people is so horrifying that in this day and age when terrorists are beheading innocent people, I am surprised that someone would want to make a movie like this.

The gore level is not quite what the advertising suggests, but that opinion only applies to me. For most people the gore factor would no doubt be quite extreme, and I was just a little more than stunned to see several preteens leaving the theater when the movie was over. I believe in the right of adults to watch what they want to, but to take your very young kids with you to see this movie makes me question your parenting abilities as well as your level of common sense.

Yes, I believe children should know what’s going on around them and not be lied to about how much evil there really is in the world, but I don’t believe they need to actually see it played out on a movie screen. In addition to the gore, there is also a considerable amount of nudity and simulated sex.

I won’t tell people not to see this film, because I don’t believe in doing that, but I will simply say this: this film will terrify you and is definitely not for those with very weak stomachs.
My Ratings: Extremely Offensive / 4

Edward Drake, age 34
Negative—This was the most obscene and appalling movie I’ve ever seen! It made me want to throw up! The torture was gruesome, and the nudity content as a Christian was honestly disturbing. If there’s one thing I could take back doing in my life, seeing that movie would be it!
My Ratings: Extremely Offensive / 1

Sarah James, age 34
Negative—I didn’t watch the whole movie because it was to gruesome and gross, also the nudity was very immoral. I wouldn’t recommend going unless you want to be sick to your stomach.
My Ratings: Extremely Offensive / 1