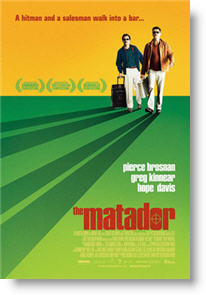 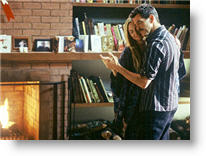 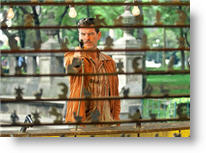 “A hitman and a salesman walk into a bar”

T“he Matador” is a film based on an unlikely friendship between a hitman and a normal “nice” guy. Pierce Brosnan plays Julian Noble, a vulgar hitman who is anything but noble. Greg Kinnear plays Danny Wright, a down-on-his-luck businessman who is still mourning the death of his young teenage son. The pretense of the film is the friendship of these two alleged polar opposites. Julian (Pierce Brosnan) finds himself in Mexico City on a job. It is his birthday, and he has no one to celebrate with. Danny (Greg Kinnear) is in the hotel bar enjoying a drink when Julian strays in from a brothel/sex club he had just fornicated in. They engage in conversation and begin their friendship.

What is ironic is that as the film progresses we see that these two are not so different after all. Julian (Pierce Brosnan) is a vulgar, lewd, immoral man who says whatever comes to mind, and Danny, appearing to be moral, seems to enjoy Julian’s sinfulness. While not fully partaking in it, Danny laughs along with Julian in amazement. I was struck with the idea of a seemingly moral man indulging in and approving of the sinful behavior of an immoral man. The Apostle Paul was very clear in 1 Corinthians 15:33, “Do not be deceived: Bad company corrupts good morals.” However, this man was only seemingly good. In the end, we see that he is no different than the assassin. He is just as evil and greedy and will do anything to succeed.

The film is not about a real friendship. It is about a friendship of convenience. It shows the level of corruption from within. It poses the question, how hard and desperate do things have to get before you sell out and do things that you would never do for “survival”? It did not take much for Danny Wright. While I felt empathy for Danny because of the loss of his son, I never developed an emotional attachment to him. He even allows the perverted Julian to engage in a sexy dance with his wife (played by Hope Davis).

The film is vulgar and dirty. The language is inexcusable, and the nudity and sex sequences are too graphic. This film is not to be viewed by children and/or teenagers. I encourage any believer with a desire for purity and holiness to abstain as well. I am ashamed of myself for not walking out. There is no redeeming quality at all in this film. I wish I could write of witty dialogue or good direction, but I can’t. The film is a complete and total mess.

Comments from young people
Negative—I watched “The Matador” and was extremely disappointed. I knew the movie was about a hitman, but I had expected him to be shown as regretful in the end. The movie, however, made killing seem like no big deal. As a matter of fact, it made it seem like we as humans have the right to take another life if it’s for our “benefit.” Pierce Brosnan’s performance was also quite stilted, and I did not get much enjoyment from watching him in the role of Julian Noble.

Another bad thing about the movie I must point out is its sexual content. Not only did the producers choose to show women in general as sexual objects, but Pierce Brosnan’s character was also extremely vulgar. He never showed any emotional growth as the movie progressed, and the way the movie ended was extremely disappointing. Greg Kinnear’s character seemed like a good guy at first. This might have been a redeeming aspect of the movie, but instead, the producers made him and the hitman very similar in the end.

I would definitely NOT see this movie again, because, though I don’t tend to be very conservative about my movie choices, I would still say this movie crossed the line. Don’t waste your money on it.
My Ratings: Very Offensive / 2½