The Wind that Shakes the Barley 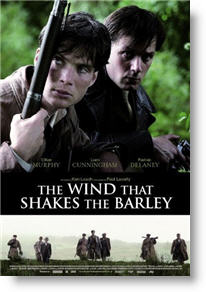 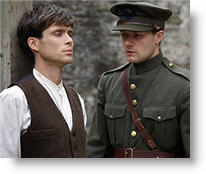 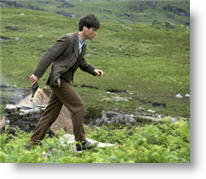 Here’s what the distributor says about their film: “Ireland 1920: workers from field and country unite to form volunteer guerrilla armies to face the ruthless ‘Black and Tan’ squads that are being shipped from Britain to block Ireland’s bid for independence.

Driven by a deep sense of duty and a love for his country, Damien abandons his burgeoning career as a doctor and joins his brother, Teddy, in a dangerous and violent fight for freedom.

As the freedom fighters' bold tactics bring the British to breaking point, both sides finally agree to a treaty to end the bloodshed. However, despite the apparent victory civil war erupts and families who fought side by side find themselves pitted against one another as sworn enemies, putting their loyalties to the ultimate test.”

Positive—This film is beautiful but wrenching, depicting comradery and warfare in rural 1920s Ireland, including some glimpses of torture. It is timely—it places the viewer in the midst of an occupation, forcing one to wrestle with what would it feel like to watch one’s people being controlled, brutalized and killed, and to discover how easy it would be to yield to temptations of violence and terrorism against an enemy. Then, the story progresses as violent divisions form within the community, because they disagree so passionately about how to respond to the occupiers. Just like the Irish townspeople in this movie, Christians will reach different conclusions about the ethics of warfare and violence. Texts like the first two chapters of 1 Peter are good fodder for discussion. Stories like this with compelling scenes and characters can make such topics less abstract.
My Ratings: Average / 4½

Alan Rutherford, age 42
Positive—First of all, the nitty gritty for parents and Christians: This film does contain a lot of foul language. I could not count how many times the f-word was used. The s-word was used quite a bit as well, and several others. I do not recall the gd word being used, however the name of Jesus is used often. Many times it is used as a plea during a moment of intense crisis, but other times it is used as a swear word. There is also one scene of implied fornication, since it is not entirely clear if the two are married or not at the time. However, there is zero nudity, simply a passionate kiss and camera fade.

Christianity is portrayed in an objective light, meaning people’s faith is presented without any obvious pro- or anti- bias. Christianity is of course represented in the film primarily by Roman Catholicism (which is to be expected due to the subject matter of the film), and is done so quite objectively, I believe. Both “good” and “negative” aspects of Roman Catholic leadership during this time in Irish history were fairly protrayed. I could not detect any direct or implied anti-Christian bias in this film.

There is violence, quite a bit of it, however it is one of the most realistic movies I have seen in the way it portrays that violence. There is no 'gore for gore’s sake' so common with Hollywood movies, in fact the blood is kept to a minimum. However, be advised there are some seriously intense scenes of brutality. I would caution against allowing young children seeing this movie due to emotionally intense scenes of violence.

Now, regarding the film’s technical qualities: This is an EXCELLENT movie. Very realistically done. The fight scenes are filmed in a manner similar to that of “Saving Private Ryan,” ie realistic, “you are there” filming, as if the camera (thus the viewer) is an individual in the midst of the action.

The scenes are also done in a way that does not attempt to glorify the violence, but rather simply presents it as it is—raw, painful, tense, shocking, emotional, and sad.

The camera work was excellent, I thought, throughout the movie. The acting is also quite realistic. People actually stutter when talking under stress (just like in real life!).

One note: Unless you are familiar with Irish accents, you will probably need to have subtitles activated as the Irish brogues of the actors are very thick. Otherwise, you probably will not be able to tell when they are speaking English or the few scenes where people are speaking Gaelge (native Irish).

Now, regarding the movie plot: This movie has divided people politically, and that is actually a good sign, because it shows the movie will make you think. It is clearly scripted from a Republican (Irish Republican, that is) perspective, that much should be obvious. It is about British oppression in early 20th century Ireland, and the struggle for Irish independence (and the aftermath). People who’s loyalities are with Britain will likely be offended at the way British soldiers are represented. However, the Irish Republicans are not given a rosy treatment. I would say this movie is extremely realistic in that it protrays both the good and the evil in men (including the “heroes” of the film).

This is no “the good guys win all” film, but is more like real life, where ordinary people make their decisions and consequences abound, both good and bad. Also, like Irish music and Irish history, this movie is full of tragedy (in the classical sense). One of the most stirring scenes involves an Irish woman singing the movie’s namesake. Very intense, and like the song, very sad.

My only regret about the filmaking and storyline is that the main female character was not developed enough, in my opinion, and neither was her relationship with the main character. I believe the film could have delved more into that and thus developed more viewer identification with her.

I gave this movie a moral rating of “Average” because of the use of our Lord’s name and the other cussing that occurs in the movie. However, let me say the use of cussing and profanity is actually quite realistic (as in, typical of real life), and unlike typical Hollywood fare did not seem to be inserted just for the sake of being vulgar.

Overall, this is an EXCELLENT movie depicting the Irish struggle for independence, and the subsequent civil war that ensued during the 1920s, from the point of view primarily of two brothers who find themselves torn apart just as their country was. I highly recommend this film to any mature Christian wanting to get the Irish view of the “Troubles.”
My Ratings: Average / 4

Moira Macdonald, The Seattle Times
…A bold attempt to convey a complex situation that captures the anger and tensions of early-20th century Ireland, but falls strangely short on human drama.

Damon Wise, Empire Magazine
…It is soulfully acted, intensely harrowing, exhausting, uncompromising, full of tears along the way, with a heartbreaking ending. ‘Sad’ doesn’t describe it. Immensely sorrowful might. …

Barry Paris, Pittsburgh Post-Gazette
…Beautifully shot… may be the most powerful look yet at the guerrilla-styled Irish rebellion against occupying British forces in 1920-22…