for violence including sexual assaults, language and sexuality/nudity. 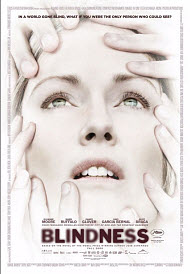 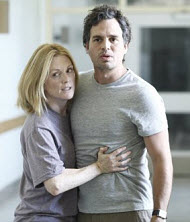 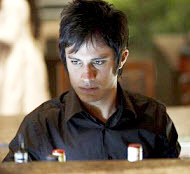 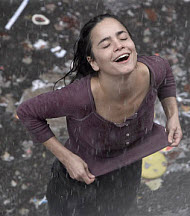 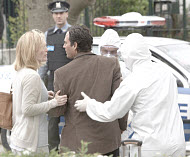 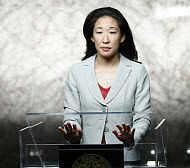 Blindness in the Bible

This film is based on the novel Ensaio Sobre a Cegueira by José Saramago.

“In a world gone blind, what if you were the only person who could see?”

In 1999, Jose Saramago released his novel Blindness. That year it won the Nobel Prize for Literature. I have read the book and personally thought it was a great novel, but would be near impossible to translate to film. The style and content seemed too literary to be put into a movie. Suffice to say, the film was for the most part successful.

The movie, directed by Fernando Meirelles, tells the story of an unnamed city where its residents have suddenly gone blind. There is no black; they only see white. One of the people who have gone blind is a doctor (Mark Ruffalo). Strangely enough, his wife has not gone blind. To halt further contamination, the government is sending everyone infected to abandoned hospitals and asylums. In an act of unselfishness and sacrifice, the Doctor’s Wife (Juliane Moore) decides to go with her husband to an abandoned asylum. The Doctor’s Wife becomes the eyes and the leader for all those who are suffering.

Once there, things take a turn for the worse, and the darkest human impulses emerge. “Blindness” is a very dark, disturbing exploration of how we as humans react to detachment, loneliness, role reversals, and hopelessness. While it details these elements, it also follows our human capacity for survival, hope, and courage. It is difficult to watch at times, but these dark moments only make the light of hope more powerful.

For those sensitive to sex and violence, this is probably not a film for you. It is not gratuitous, but it is there. One scene especially hard to watch is when the women need food, they must give themselves to the men, who have all the food. It displays the women’s bravery, and this brutal scene is followed by a touching moment of human compassion. What Meirelles does so well is present this and other scenes, without being exploitative or gratuitous. We know what’s going to happen, but when the act actually occurs, it’s dark, and we cannot make out what is happening; you only see shadows and hear voices. I believe this makes the scene seem to flow with the plot and not just placed in the film to shock.

One of the most fascinating aspects of “Blindness” is how Meirelles makes the audience feel as though they are blind, also. Certain scenes are darkened, so we cannot see what is going on. In other scenes, the screen goes white (the kind of blindness the characters experience). In one brilliant scene, a boy walks into a table the audience doesn’t even see until he runs into it. These effects have the affect of making one disoriented and maybe frustrated, but it works. The entire film is drained of any bright colors. Even Julianne Moore dyed her hair blonde for the movie, adding to the look.

Julianne Moore is amazing as the doctor’s wife. She adds so much human emotion to her character that she becomes the heart of the story, as well as a well-rounded character. The other characters were good, but not as well developed. I don’t believe there ever was an intention to develop them to a full extent. Each person has quirks and interesting aspects to their personalities, and they are not one-dimensional.

Of course, this film is not without it flaws. The original score by Uakti does not fit well in this movie. It tries to be unique and bizarre while, in fact, a more customary soundtrack would have improved the movie. There is a time for unusual music (it fit “There Will Be Blood” perfectly), but the score for “Blindness” did nothing for me. Some scenes don’t seem to make sense, as we try to understand the characters’ motives. In the book, details filled in these gaps, but in the film the gaps are left open. These are not major plot holes, but there are just two or three scenes that take you out of the movie for a second, because they don’t exactly make sense.

In this film, the Doctor’s Wife portrays a very strong Christ figure. She chooses to go to the containment centers so she can help those who are blind. She suffers for others. She defends others who cannot defend themselves. And later, she leads those who are blind through a dark and hopeless world where she gives them hope and comfort. Without her, they would be lost.

Overall, “Blindness” is effective, haunting, and very faithful to the original source. It is unique, but not for everyone. In the beginning, when the doctor and his wife leave their apartment, the camera focuses on a plate of fruit. The fruit is healthy and looks good. Later in the film you see this plate again and the fruit is rotten, showing the change that has happened to the souls of the characters. Yet, throughout all the damage and carnage, the human spirit is able to survive and come through with hope and love.

CONTENT REMINDER—There is intense violence and sexuality (including nudity) along with some strong language.

Negative
Negative—I went to see this moving thinking it will be another “natural disaster, plague type of movie.” The movie just went from bad to awful! This movie was extremely offensive. In my comment here I’m going to describe some of the offensive parts so please be aware of that as you read my comment.

It was about people all the sudden becoming blind. The movie never explained the cause for the blindness except everyone became blind except one person. They start to put people in this quarantined building. There is no authorities or structure so people start doing what ever they want. They urinate and poop everywhere. The one person that is not blind tries to help, but the place just gets fuller and fuller of people and she can’t keep up. People are walking around naked, having sex in the middle of places. The sex scenes are extremely graphic, almost pornotic.

The worst part is the rape scene. A group of the people seize all the food and they demand that the other group gives them their women in exchange for the food. Several women agree because they are starving and their group is starving. They are basically raped and one of the women died and the guy kept having sex with her.

This movie did have good acting. The film quality itself wasn’t that great. Overall, it was awful. The worst movie I ever seen and probably should of walked out after the first 5 minutes!!
My Ratings: Moral rating: Extremely Offensive / Moviemaking quality: 1½

Alessandra, age 30
Negative—It was a very disturbing movie that my boyfriend and I did not feel comfortable watching. In fact, we closed our eyes in some parts.

Let’s make the right choices when seeing movies. I am just giving advice that even I have to ask myself… Would Jesus be pleased with me? Would Jesus watch this film? If you think not, maybe you should not either.
God Bless you all.
My Ratings: Moral rating: Extremely Offensive / Moviemaking quality: 2

Positive
Positive—I don’t understand why this film is getting such an intensely negative focus. Yes it is gritty. Yes it has very heavy and depressing material such as rape, murder, etc. But what would you expect?

In the film everyone except one woman goes blind. If this were to happen in our world, I would expect people to react the same way, if not worse than is portrayed in the film. It is an examination of how people can lose all reason and control in a panic filled and unknown situation. Overall, I must say you should be very mature and prepared for what you will see, but I don’t think it is over the top at all.
My Ratings: Moral rating: Very Offensive / Moviemaking quality: 4½

Colt, age 19 (USA)
Movie Critics
…brilliant… The film’s extreme setting allows Meirelles to ask basic questions about how human beings respond to difficulties like hunger (or war or massive economic crisis). As hope begins to creep back in at the end of ‘Blindness,’ you realize he has shown us beauty in the midst of ugliness. …

Chris Hewitt, St. Paul Pioneer Press
…‘Blindness’ leaves disturbing images of physical and social disintegration… It is not an easy fable. So few worthy fables are. …

Phil Boatwright, Preview Family Movie and TV Review
…There are dashes of utopian and quasi-religious uplift to be found here, especially at the end. Yet the film’s downer of a message recalls not Dante, not Sartre, not even previous sci-fi fables of raging pandemic (zombie cannibalism in ‘28 Days Later,’ blindness in ‘The Day of the Triffids’), but another tale of social and moral collapse: William Golding’s Lord of the Flies. Minus civilization, humanity sucks. End of story. …

Amy Biancolli, Houston Chronicle
…settles on glossy flash and heaps of symbolism instead of a clear plot and strong script…

Garrett Conti, Pittsburgh Tribune-Review
…ugly images and high-flown pretensions… Too often, the viewer is conscious of watching a lesson.