for crude and sexual content throughout, language and some comic violence 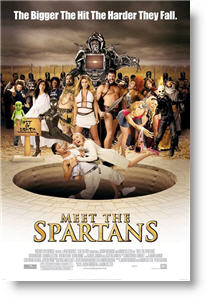 What’s wrong with being gay? Answer
Homosexual behavior versus the Bible: Are people born gay? Does homosexuality harm anyone? Is it anyone's business? Are homosexual and heterosexual relationships equally valid?

“The bigger the hit the harder they fall.”

“Meet the Spartans” is a spoof of the movie “300,” which integrates many different famous celebrities to mock by using look-a-likes. The movie also throws into the mix many types of music, such as rap and hard rock to appeal to the younger generation.

I have to confess, I allowed my 13 year old and her friend to see this movie without seeking any reviews of the movie. I thought that, given the PG-13 rating the movie, it would be mild enough for this age and would not be completely inappropriate. We stayed approximately an hour into the movie, before I made the decision to walk out.

During the first 10 minutes, there is a great deal of foul language. The first scene begins with a man throwing babies off a hilltop. This is to spoof the idea that the Spartans raised their children under the survival of the fittest mentality—one in which the strong babies will live, while the weak are seen as degraded and not worthy of survival. After the decision is made to throw the baby, it shows the baby landing on a heap of already dead babies. Sadly enough this is symbolic of a heated debate in our country, and one that is lived out everyday in clinics across America.

Another major scene is the meeting between a representative of the invading army and King Leonidas. The spokesman for the invading army is attempting to encourage the Spartans to surrender their city. During this meeting, a discussion ensues related to the way the women of Sparta greet their guest with the “Top Gun” hand slap and the men greet their guest with a tongue twisting French kiss. This greeting is demonstrated many times throughout the movie.

There are many spiritual issues throughout this movie.

Don’t let this movie’s PG-13 rating deceive you. In my opinion, the rating of “R” should have been given for strong sexual content, language, violence and adult themes. Due to its extreme vulgarity, I do not recommend this film for anyone.

Neutral
Neutral—This movie was okay, but I'd wait to rent it or even wait until it's shown on TV. It's not nearly as clever as the “Scary Movie” franchise. The homosexual portrayal of the Spartans, while humorous, was a bit over the top, as was much of the other sexual content. I would've thought that most people would know going in that this film would be fairly raunchy, as these movies always are, but reading the comments here it seems not. It's mildly entertaining, but not something worth paying much money for.
My Ratings: Moral rating: Offensive / Moviemaking quality: 2½

Dustin, age 20
Negative
Negative—My son saw this movie today with his 12 year old son (my grandson) and called and told me he was so offended by this movie. He was angry with himself for not walking out. He said it was predominantly homosexual in content, crude, vulgar, nothing a Christian would want to see, let alone with children. He said he had a talk with his son after and apologized for allowing him to stay and watch it all. He felt sickened that the entire audience, with many children younger than 12, sat and watched it in it's entirety. If more people would get up and leave and demand a refund (we have many times and the manager has always given us a “raincheck” or a refund) maybe the movie industry would get the hint and stop making disgraceful movies like this.
My Ratings: Moral rating: Extremely Offensive / Moviemaking quality: 3

Janene Bever, age 67
Negative—Yes, the movie was bad, but all u people are taking it way to far. U are the ones who choose to see this (bad) movie, and I thought it was funny in parts and bad in others. But why would u let 12 year old kids watch this and then be mad at the movie?? It's kinda ur fault for watching it. Be warned the Spartans are gay!
My Ratings: Moral rating: Offensive / Moviemaking quality: 1½

Josh, age 18 (USA)
Comments from young people
Negative—This movie was not a movie that I would see again. If I could go back in time with the knowledge that I have now, I would not have gone to see it. Basically, the movie makes fun of “300.” It portrays the Spartans as gay and their wives as whores. It was full of sexual innuendos and sex scenes. It was not a Christian-like movie at all. Along with being completely pointless, this movie had some rather nasty scenes. I would not recommend this movie to anyone of any age. There was relatively no humorous scenes. I personally hated this movie. It is not appropriate for any age, especially anyone under 18 and male.
My Ratings: Moral rating: Extremely Offensive / Moviemaking quality: 1

Jonathan Brown, age 15
Negative—This was such a bad movie… it was sooo dumb! …they all try to be funny, and it wasn’t! A waste of money. The only funny parts are in the commercial. And they really emphasize that the Spartans are Gay. …skipping around in leather underwear holding hands… NOT FUNNY! And there a bunch of gross humor… for instance, “Paris Hilton” has a HUGE like hump on her back and then the fat hairy guy in a thong underwear stabs it, and she blows up. And there is like Paris Hilton every where. SO GROSS!!…
My Ratings: Moral rating: Extremely Offensive / Moviemaking quality: 1

Mckenzie, age 14
Neutral—I went to see this movie with my friend and my 16 year old brother. It was very humorous and had me smiling almost all of the time. Although, there were negatives. There was lots of sexual content, but no sex scenes, and tons of profanity, but no F-words. I think this is definitely a guys’ movie. In its defense I will say though, that I can't remember a time when they used the word Jesus or anything else related to Christianity.
My Ratings: Moral rating: Very Offensive / Moviemaking quality: 4

Jacob Johnson, age 12
Positive—I went to go see this movie with my friends, and we were seriously laughing the whole entire time. However, there were two major problems I had with this movie, being a christian, and they were the strong homosexual influences and the sexual references throughout the whole movie. Other than that, it was hilarious.
My Ratings: Moral rating: Very Offensive / Moviemaking quality: 2½

Matt Kruge, age 16
Negative—I went and saw this with a friend and her older sister. I usually like “spoofs,” like “Scary Movie” and others, but I was very disappointed with this one. It was very dumb, and some parts were so uncomfortable, you just wanted to turn around. Thankfully, my mom paid for my ticket, so I didn't waste my own money, haha. I would definitely not recommend this for anyone. If you really want to see it, wait until it comes out on video and rent it, so you don't waste as much money.
My Ratings: Moral rating: Very Offensive / Moviemaking quality: 1

Virginia, age 14
Negative—I am a fan of the “Scary Movie” series. I don't agree with the extremely innapropriate content of the harsher, R-Rated films, but I am a fan of slapstick, stupid humor—a trait I share with my Dad. Though I despised “Date Movie” and “Epic Movie,” which were both uninventive, unoriginal, unfunny and extremely offensive, I had hopes for “Meet the Spartans.” The previews looked funny, but the actual film was not. I only chuckled—not laughed—maybe twice. I should have stopped the film within the first fifteen minutes, which were terrible, but I am a sucker for movies, so I finished it.

I wasted an hour and a half that I would have been better off wasting on the Disney Channel—which even though is terrible, is mostly clean. “Meet the Spartans” was an unclean… about sex, homosexuality and throwing around obscenities. Don't ever, ever, ever watch this movie! Not only is it a terrible waste of time, it leaves the viewer ashamed for watching it. Please steer clear!
My Ratings: Moral rating: Very Offensive / Moviemaking quality: 1