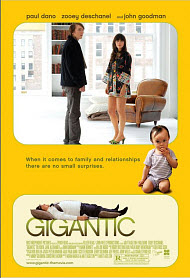 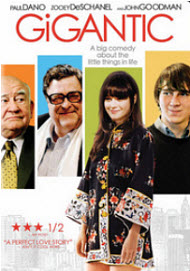 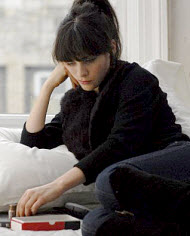 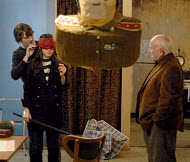 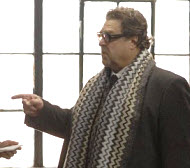 “When it comes to family and relationships, there are no small surprises.”

Brian Weathersby (Paul Dano) works as a high-end mattress salesman, a dead end job, living a dead end life during which he is searching for life’s meaning. He believes he will find this if he is successful at adopting a Chinese baby. Unbeknownst to him, a new chapter in his life begins when Al Lolly (John Goodman) stops by the store to buy a mattress to help him with his back problems.

When Al’s daughter Harriet (Zooey Deschanel), who goes by “Happy,” stops by later to finalize the sale, he finds himself drawn to her and shares what he has told everyone else in his life about his plans to adopt. Their second meeting finds Brian delivering the mattress and then, as a favor, helping her transport her dad to his back doctor. While in the waiting room, she casually and unexpectedly propositions him, he accepts, and they proceed to spend the rest of her dad’s exam time in the back of the car in the parking garage. While seen only from a distance, nothing is really shown but this is not a romantic scene in any sense.

What is fornication? Answer

Soon after, Brian goes with his dad and his two successful older brothers out to the woods on their annual hunt for mushrooms. While there, he has a heart-to-heart with his dad (Ed Asner) about the possibility of becoming a father—during which the following exchange takes place (revealing something about the script): “You’ve got what it takes.” “What does it take?” “I haven’t the foggiest.”

The film’s focus is split between the pursuit of a baby, Brian’s family, Happy and her dad, and a homeless person who stalks Brian and repeatedly attacks him for no apparent reason.

There are plenty. From the outset the profanities are numerous, beginning with the music over the opening credits. The “S” word, the “F” word and various combinations are spoken by a majority of the cast, including a string of profanities by both Goodman and his doctor. The Lord’s name is always taken in vain, as one would expect this eclectic cast of characters to do.

The violent content is delivered primarily by the homeless man who takes great relish in brutalizing the main character throughout, leading to the expected bloody conclusion.

The violence curiously brings us, in a roundabout way, back to the main character, Brian. The movie never identifies where his desire to adopt a baby came from. His dad tells the adoption agent that when Brian was a kid he once bought him a bike, and he ran away crying, saying that he had wanted a Chinese baby. Brian himself admits that his goal “is weird,” but it gradually begins to dawn on the viewer that this dream originates from a psychosis, and, it must be stated, a very implausible one at that.

Movies, such as this one, would have us believe that profanities are just a more expressive way of speaking and in no way harmful to us. To the contrary, for our own well being and the wellbeing of others, the Bible tells us “Do not let any unwholesome talk come out of your mouths, but only what is helpful for building others up according to their needs…” (Ephesians 5:29).

On sex and marriage, the Word of God teaches us that, among other things, “…since there is so much immorality, each man should have his own wife, and each woman her own husband” (1 Corinthians 7:2). And while the apostle Paul recommends a chaste single life, he recognizes the reality for many that “…if they cannot control themselves, they should marry, for it is better to marry than to burn with passion” (1 Corinthians 7:9).

Hollywood would gladly tear down the traditional institution of marriage and everything that goes with it and instead promote foreign baby adoption by a single parent as a positive way to give one’s life meaning. Does this sound familiar? As dysfunctional as Brian is, the anticipated adoption is meant to be seen as the ‘cure all’ to his own personal demons, but this is totally unrealistic and one can’t help but feel that his problems are the only thing “Gigantic” about this film and will continue to live beyond its conclusion.

What do Hollywood celebrities believe about spiritual issues? Find out

The pace of “Gigantic” is unbearably slow and tedious. While the actors, especially John Goodman, give it their level best, the story told is just not interesting, and I doubt most will want to watch the movie all the way through. I cannot recommend this film on any level, let alone for any reason to Christians. As for those who are just looking for a “quirky, surreal love story,” this is not it.