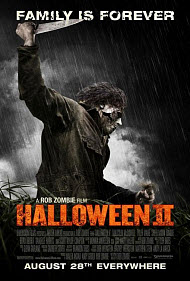 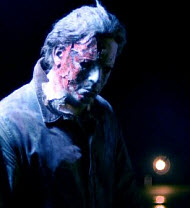 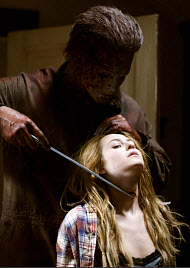 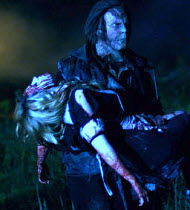 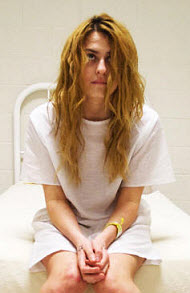 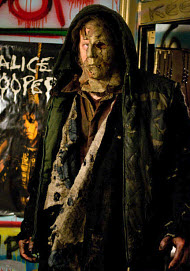 Picking up right where the first film left off, Laurie is taken to the hospital after supposedly killing the man who was responsible for the deaths of several people in the town of Haddonfield, Illinois. However, her stay at Haddonfield General becomes very brief when a very much alive Michael appears once more, brutally murdering everyone in the hospital to find his sister.

Michael disappears, and Laurie survives the infamous Halloween massacre, but is still haunted by it years later. Laurie struggles to come to terms with her dark past, or at least forget it. But the supposedly dead Michael Myers has other plans, and as the anniversary of his massacre approaches, he returns to Haddonfield once more, with a family reunion planned that Laurie will never forget.

With all that, you must understand one thing: this is not a remake of “Halloween II,” this is Rob Zombie’s Halloween II; this is very evident throughout the movie. As a Christian, the few things that some may appreciate in this movie are the cinematography and the soundtrack, other than that you can just close your eyes or not even bother buying a ticket. This movie will disturb anybody, but especially those who are not that strong in their faith or are a new Christian. You have to take “Halloween II” for what it is: a horror movie and entertainment (to some people).

I can sum up this movie with a few points, which I will do first, then I will get into the offensive stuff. First off, this is Laurie’s movie, whereas “Halloween” was Michael’s movie. Yes, in “Halloween II,” Michael is a prominent character, but the plot sequence isn’t focused on him. Rather, the whole movie is about the mental states of Laurie, Annie, Sheriff Brackett, and the others affected by Michael’s brutal massacre in the first movie.

Laurie has many nightmares (which are played out violently on screen) and, somehow, is connected to Michael’s hallucinations. Dr. Loomis is now a money hungry author, who seems to show very little emotion about making money off of other people’s hardships. You take out all the gore and killing thrown in between all this character development and you know basically know what this movie is about. Knowing that this is a horror movie, it is redundant to say this movie is offensive, but for all intensive purposes I will explore what makes this movie offensive.

Sex and nudity—At one point, a strip joint owner is shown about to have sex with a fully nude dancer. Then, later in the film, there is a very brief scene of a young girl hooking up with a boy at a party, and at this party there a many topless girls on stage with the band that is playing.

Violence and gore—I don’t have enough space to list everything that happens in this film. Many of Michael’s kills are senseless, violent, gory, and bloody. There is a term in the police world, “over kill,” which Michael did many times. It’s a horror movie, mind you, but you also have to remember that Zombie is behind the camera, so you know the violence and gore are going to be in 5th gear the whole time.

The profanity is also profuse throughout. There is a mix of every cuss word and vulgarity you can come up with. The f-word is used well over 50 plus times, as well as the Lord’s name is taken in vain various times. Again, credit this to the writer, Rob Zombie.

The drinking is very little, and there are no scenes of drug use or mention of drug use, which surprised me. Laurie uses alcohol to escape the truth of being Michael’s sister, and God says not to rely on anything of this world to help with your problems.

My last thoughts would be: don’t go see this movie, and if you do go with a group of friends you can talk to afterwards. This movie will disturb you on every level possible. Rob Zombie stays true to the horror genre, really setting himself apart from the pack, and really showcasing what horror should be. His only fault would be how he tries to give almost every character a back story, and uses a lot of film on character development. God commanded us that we should not murder, and Michael breaks this commandment various times along with every other commandment. This is not a family movie and definitely not something to bring your kids to. Very few people will understand the psychosis element of this film, but as a bipolar person I understood the reality of how far you can fall when you don’t take care of your mental health.

One of the taglines of this film was that “family is forever.” The only family that I know is forever that family of believers in Jesus Christ. Don’t go into this movie expecting this movie is going to show any morals or Christian values, because Zombie is far from a believer, and his movies are a testament to that. The movie was good from a filmmaking stand point, but, from the script and what was played out the screen, this movie was very disturbing. You will walk out of the theater praying to God that evil does not overcome you. If at all costs, avoid this movie.

Last point, what this movie seems to show is that murder is okay and that dealing with your problems with violence is okay; this is not God’s plan. Murder and death are a reality in the real world and films because of Adam’s sin, but Jesus will one day return and will wipe out all death, sin, tears, sorrow, and pain. Trust in God, not this world, to solve your problems; this truth you will not find in this movie, so stay clear if you have trouble understanding this. Really, stay clear in general.