for disturbing violent content and terror, some sexual references and thematic material. 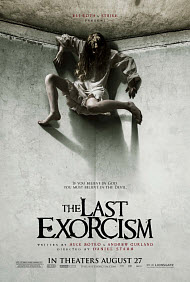 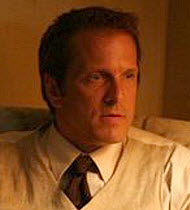 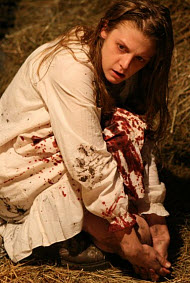 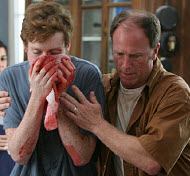 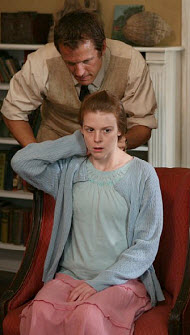 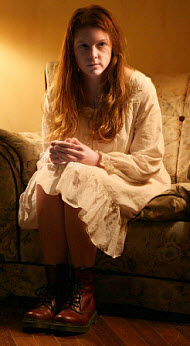 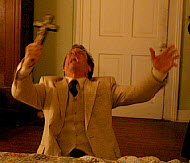 Exorcist in the Bible

I'm not sure if “The Last Exorcism” has a Christian worldview or not. And you know what? I don’t really care. The bottom line is that it’s not a good movie for Christians to see. Sure, it’s a creepy horror flick about a teenaged girl who’s possessed by a demon, but Jesus Christ is treated more like a plot device than anything else.

To start at the beginning: Cotton Marcus is a young pastor who’s been brought up in the church. He’s something of a superstar preacher, relishing in the performance aspect of his job more than ministering. He’s performed a number of exorcisms, but, then, due to a tragedy in his family, he winds up believing that there is no supernatural element to his exorcisms. In short: he believes that the “demons” he exorcised were nothing more than psychological oddities. He played the role of placebo, not a divine priest.

So he gets the idea to invite a film crew to document one of his exorcisms. That way, he can prove to the world what a sham exorcism is.

Right away we have a classical story arc—Man has belief, man loses belief, man regains belief by immersing himself in his new worldview.

Watching this movie was a very strange experience. Its satanic aspect clearly made me uncomfortable, but I, also, found myself questioning the director and screenwriter’s choices. The ending of the film is a mess. I probably shouldn’t reveal any spoilers, but I will say that at the end, you have no idea who anyone was anymore. Was that pastor character a good guy or a bad guy? Was the brother in cahoots with demons, too? Yadda yadda yadda.

I took a Christian friend of mine to see this as her birthday present. Later, I hear that a lady in our church was uncomfortable to hear that we went to see it. She doesn’t like horror movies, in general, but Satan movies really disturb her. Rightly so.

Look, everyone. When it comes to Satanism, all Hollywood cares about is making a movie that will make money. Jesus Christ is not glorified in this movie. In real life exorcisms, I would hazard the guess that He always is.

Positive
Positive—I just saw this movie and I loved it! To finally see a movie that takes talent, depth and grace. The relationships were REAL! Parents in royalty, friendships, spouses supporting one another, strong family values. Respect! Honor! These are characteristics that are very hard to find in this world. History, something we don’t get anymore. Encourages me to open a history book. The “R” rating was surprising. The language used was fair because the use of foul language was stated by the actor that he doesn’t use these words. God’s name was not taken in vein, but the words are harsh. I highly recommend this movie but for a mature teenager and up. Now I need to find a book about this story!
My Ratings: Moral rating: Good / Moviemaking quality: 5

Mary Siegwart, age 51 (USA)
Neutral
Neutral—I like this movie, but Christians be warned it questions religion and god. Also, it should NOT have been PG-13. Blood is shown all over the main character’s clothes several times. A cow is shown dead with its ribs showing. A cat is brutally beaten to death by a video camera. A bloody baby is pulled out of the main character and thrown into fire. Off screen, a woman is hacked to pieces with an axe, and a man is decapitated. A horse has its stomach slit, and you CAN see its intestines. It definitely should have been “R.” Other than that, it was great!
My Ratings: Moral rating: Very Offensive / Moviemaking quality: 3½

Adam, age 18 (USA)
Neutral—I went into this movie hoping that Hollywood would have gotten the deliverance/exorcism aspect of Christianity done somewhat right a la Exorcist/Exorcism of Emily Rose. Authenticity, real supernatural occurances and possession. The first part of the movie seemed to be heading in that direction… Then it all fell apart.

The worst part of this movie is that it doesn’t know what it is. It gets lost in its own ambiguity and takes the viewer with it. Is she genuinely possessed? Is she simply sick, or is she a fraud? The movie seems to jump from one to the other and tries to make it all three. It’s a mess. Don’t even get me started on the ending.

What could have been a good movie and what started out as hopeful turned into a big mess. If you want a good modern day exorcism movie, I would recommend Exorcism of Emily Rose. Skip this dreck.
My Ratings: Moral rating: Average / Moviemaking quality: 2½

Darrell, age 39 (Canada)
Neutral—The movie is not perfect, but it does have an interesting message if you pay close attention. First of all, you have the Reverend Cotton Marcus. A man who has lost his faith but continues to play the reverend role due to the fact that people flock to his charismatic persona and he still needs to make a living. Biggest joke is that he can say anything while preaching and his congregation will go along with it. They aren’t listening to his words.

The whole exorcism is a big joke to him and the film crew. The whole time he believes that the girl is psychotic. Then finally the demon talks, the Reverend starts to think that maybe this could be real. But remember his doubt was huge, so when the demon says a phrase that sounds something the girl would say, the reverend goes right back to doubting and right back to analyzing her mental state.

It is not till later he realizes that the devil is the prince of lies and by saying that phrase “that certain way” it made him doubt and leave. We are then shown that the father was right when he pulled his daughter out of her Sunday School because they were teaching her wrong things. He wasn’t crazy.

At the end the reverend is faced with the fact that demons are real and not everyone is what you think, he then prays and tries to fight. How many of us pay attention to what our kids are learning? How many of us open our bibles and check that our pastors message is based on the word of God. That we are not just saying Amen out of habit. This movie shows that there are many deceiving men out there. “Take heed that no one deceives you” (Matthew 24:4).
My Ratings: Moral rating: Average / Moviemaking quality: 3½

Lynn, age 39 (USA)
Comments from young people
Neutral—First of all, on a entertainment standpoint, and to those who enjoy horror movies. This film was pretty enjoyable. It was pretty scary and creepy at times. But the movie doesn’t take itself seriously most of the time. The movie was more like a dark-comedy like “Drag Me To Hell” or “Cabin Fever,” rather than a serious horror documentary like Paranormal Activity. It had some pretty funny scenes and lines. I was expecting the movie to have some humor, since it was produced by eli roth( director of “Hostel 1 and 2,” “Cabin Fever,” etc.). If you have seen his movies, they are all very shocking, but then again has that touch of humor and sense of carelessness.

The movie played out like the usual exorcism movie environment, and it was creepy and scary and funny. The audience was laughing, screaming, jumping, and going through a whole world of emotions. It was a fun experience. But the one thing that I found weird and I’m sure a lot of people agree with me, is when I bring up the ending. The ending is probably the weirdest, creepiest, shocking ending ever. Well, not ever… but u know what I mean.

I didn’t know what to say after seeing it, but I was kinda disappointed about it’s climax. it took a totally different direction from what the rest of the film went to. But I won’t spoil it. In conclusion the movie was just a fun horror movie that will keep u laughing, scared, shocked, etc. But christians might find the symbolic satanism rituals and signs in the movie rather disturbing.
My Ratings: Moral rating: Average / Moviemaking quality: 3½

Josh, age 17 (USA)
Negative—In my opinion, the movie was not that great. The ending of the movie just leaves you hanging and I strongly dislike movie that don’t let you know what happens. I end up sitting and trying to figure out what happened for hours on end. I want a movie to tell me how everything plays out, don’t just end on a huge cliffhanger. I was left wanting to know who died, who lived, and if everything was resolved.
My Ratings: Moral rating: Offensive / Moviemaking quality: 2

Kate, age 16 (USA)
Negative—I am a big fan of shaky camera movies such as “Quarantine” or “Cloverfield,” but after watching this, I am angry. This movie mocks God in the face; Satan wins in this movie. Even the priest acts like he is big stuff. He even rips people off by using special equipment. In short words, if you want to sin right in front of God, go see this movie. Jesus is not uplifted in this junk Hollywood calls a film.
My Ratings: Moral rating: Very Offensive / Moviemaking quality: 3

John, age 14 (USA)
Movie Critics
… The format of “The Last Exorcism” itself is musty… Yet the suspense is finely crafted. …doesn’t rely on cheap shock effects but locates scares in weird images—many of which cut deep because the camera is caught out of position… Director Daniel Stamm stimulates the imagination rather than shunt it aside……

Marc Savlov, The Austin Chronicle
…a fiendishly clever plot that starts out creepily enthralling, then collapses in a heap. …

Claudia Puig, USA Today
…a lean and witty variation on the documentary-gone-wrong theme. … It’s a more nimble feat of storytelling than “Paranormal Activity,” last summer’s horror sleeper. And, like “Drag Me To Hell,” yields real chills within PG-13 constraints.

Gary Thompson, Philadelphia Daily News
…a modestly chilling, drawn out affair in which the characters and possible “scientific explanations” are more interesting than its predictable final destination. Bell is a perfectly demonic presence. Fabian is absolutely credible as a man who will not accept the supernatural, and who isn’t shy about hustling the hicks. …

Roger Moore, Orlando Sentinel
…a low-budget fake-documentary horror film that tries to raise a little hell in the jittery-cam this is really happening! spirit of “Paranormal Activity” and “The Blair Witch Project”: It’s nothing if not clever about toying with your expectations. …it does leave you with creepy images of a newly severe Bible-thumping underground America. …

Jeannette Catsoulis, New York Times
Comments from non-viewers
Negative—Christians should not give into temptation to watch horror or material which glorifies the Devil. Be on your guard lest you fall away for soon there is to be a great falling away even of the elect! (paraphrased from the NIV).