for sequences of intense action and violence, a scene of sensuality and language. 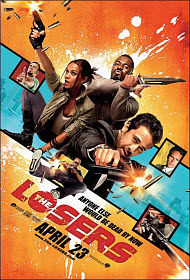 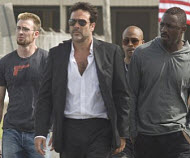 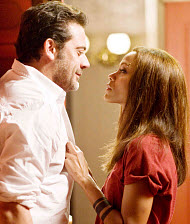 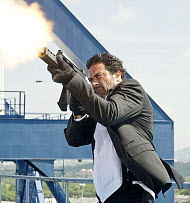 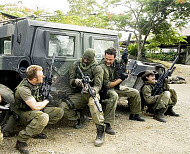 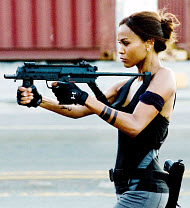 JUNGLE—Learn about the rainforest by meeting some native peoples, seeing where and how they live, and more! A cross-cultural photo-rich journey that will leave you with a lasting impression.

“Anyone else would be dead by now.”

adaptation of the Vertigo comic series, “The Losers”

It seems every action movie coming out these days is based on a comic book. Studios have been working round the clock trying to find the next big franchise from the world of comics. Comic adaptations have had their smash successes, like the “Spider Man,” “Batman,” and “Iron Man” franchises. But for every one of those successes there’s at least one “Daredevil,” “Elektra,” “Kick-Ass,” or “Hulk” that doesn’t seem to resonate with fans and therefore flops at the box office. Maybe the key is to have the word “man” in the title. “The Losers” doesn’t, and that could be the reason it’s not very good, or it could just mean that we’re officially scraping the bottom of the comic book barrel. Either way, this new comic book film offers little to distinguish itself from its many colleagues.

Based on the comic book by the same name, “The Losers” follows five special ops American soldiers who are on a mission in Bolivia. There’s Jensen the computer specialist, Cougar the sniper, Pooch the driver, Roque the tactician, and the leader they call “Colonel.” The five are presumed dead in Bolivia after a mercenary named Max destroys a helicopter that they were thought to be aboard. The five lay low in Bolivia, knowing that they cannot risk traveling back to the states.

They meet Aisha, who has her own vendetta against Max, and she recruits them to help her kill Max, and, in return, she promises to clear their names of any wrong doing and give them their lives back. Along the way, there are some twists and betrayals, most of them the viewer will see coming a mile away, ending in a vengeful and violent showdown between our heroes and Max’s cronies.

In every action/comic book movie there is guaranteed to be fighting, explosions, and an attempt at comedy. It’s the ingenuity and execution of these elements by the cast and crew that either make or break the film. In the case of “The Losers,” the cast is likable and really the only good reason to see the movie. Jeffrey Dean Morgan, Chris Evans, Idris Elba, and Columbus Short exhibit excellent chemistry as a group of soldiers who have clearly spent a great deal of time together. Zoe Saldana (from last year’s mega blockbuster “Avatar”) is representative as the female lead whose motives are uncertain. The problem lies in the completely unoriginal story and direction by Sylvain White (“Stomp the Yard”). There’s nothing new or exciting on display here, and, as a result, the cast is wasted.

From a Christian viewers’ perspective, “The Losers” earns its PG-13 rating with plenty of violence (mostly bloodless), some tough language, as well as a good share of sexual content. While there is no frontal nudity in the film, the female lead is seen in plenty of revealing outfits as well as two scenes where it appears she is topless. While none of these aspects of the movie would be considered gratuitous, they should be noted, especially when considering taking your children.

I can best sum up my feelings about “The Losers” by saying this: within ten minutes of the movie’s conclusion, I could not remember a single character’s name from the film. Despite some funny lines and a good cast, I felt I had seen this movie several times before, and my brain was on auto pilot. Generic in almost every way, “The Losers” doesn’t win any originality points, and its style and cast can only carry it so far, and that’s not nearly far enough.

Positive
Positive—Overall, I greatly enjoyed this movie. Don’t expect it to be an epic blockbuster, but is is a fun movie, with some good action sequences, and a few good laughs. There was a good bit of language, but not an unusually large amount for the genre. There was also some sexual content, but it was short and pretty easy to ignore until it was over. The movie made good uses of slow-motion, while not overusing it to the point of being irritating. Although it is a based on a Marvel comic book, it is not a superhero movie. It is an action movie. All in all, I think it is a good movie to see for an enjoyable time. Just don’t expect it to stand out.
My Ratings: Moral rating: Offensive / Moviemaking quality: 4

Zach James, age 17 (USA)
Neutral
Neutral—This movie earns it’s PG-13 rating with the following: a considerable amount of language including an f-bomb, a few scenes of sensuality that come very close to an R rating, and a bit of unnecessary violence. Aside from those negatives, the story is very good. The action, filming, dialogue, and humor are top shelf. The characters are entertaining, and we had a few good laughs. My husband and I left the theater with a shrug saying, “not bad”… but happy that we left our 13-year-old at home. Definitely not for kids or teens because of the language, violence, and sensual content.
My Ratings: Moral rating: Average / Moviemaking quality: 5

Diana O, age 41 (USA)
Neutral—I though that “The Losers” was an okay movie. As a Christian, there were offensive scenes, but many of those scenes could have been a lot worse. There is a lot of revenge filled violence and killing, but there is not all that much blood, guts or gore. I was surprised a little by how much unnecessary killing there was. I know that this is “just a movie,” but there definitely is no sense of human value or worth seen from many of the characters. Many people were killed without a second thought. There is a good amount of sexuality, but the scenes are not too long in length and with no nudity. The woman does wear some pretty revealing clothing at times. The language was pretty offensive, but again it could have been a lot worse. There was profanity as well as crude language used. The Lord’s name was taken in vain a couple of times.

I would not take children or pre-teens to this movie, but morally I think that if a person is mature enough they could enjoy it. As long as they know their own limits and their own struggles they should be fine. The action in the movie is all stuff that has been seen before. There really is nothing new, but the movie is still fairly exciting. If you’re in to action movies this is a pretty good movie; you just might want to wait until it comes out on video.
My Ratings: Moral rating: Offensive / Moviemaking quality: 3Â½

Ben W., age 23 (USA)
Negative
Negative—This movie reeks of Hollywood. I could not stand the main character “Clay. Sometimes I can feel the spirit that is residing in a certain person even when I watch them through a screen. I really didn’t have any respect for anything he had to say just because of what I felt radiating off of him.

I could smell the sex scene coming a mile away, and I’ve learned to not subject to that so I walk out during that scene.

I’m really sick of the obvious emptiness that some Hollywood producers waste our time with. We need to see more Christian movies making it to the big screen and less junk that will manipulate people into thinking stuff like this is acceptable.

Jesus is not a push over, and we need to be doing our part in the fight for souls. I ask if you read this that you pray for Sylvain White, Zoe Saldana, Jeffrey Dean Morgan, Idris Elba, Columbus Short, Óscar Jaenada, Kerry Foster, Akiva Goldsman, Joel Silver, Andy Diggle, Peter Berg, and James Vanderbilt.
My Ratings: Moral rating: Very Offensive / Moviemaking quality: ½

Movie Critics
…a pulp action rouser based on a comic-book series, but it’s derivative of many other sources…

Owen Gleiberman, Entertainment Weekly
…tries to do so little, and yet falls so short. …

Wesley Morris, Boston Globe
…knows what it’s doing and how to do it. …

Roger Ebert, Chicago Sun-Times
…An action film designed for those suffering from ADD. …

Kirk Honeycutt, The Hollywood Reporter
…“The Losers” is boring. It’s predictable. It’s so, so active, and yet so, so dead. …

Mick LaSalle, San Francisco Chronicle
…What might surprise you is how much violence slides under the R-rated wire these days. … . Jesus' name is abused four or five times; God’s is misused about 10…

Meredith Whitmore, PluggedIn
…never gives us a reason to care about its characters or to believe this story needed a big-screen adaptation. …