for pervasive language including sexual references, graphic nudity, some violence and drug content. 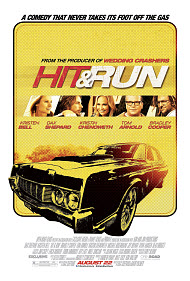 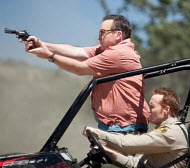 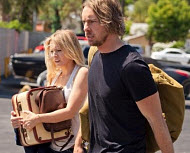 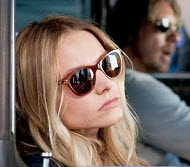 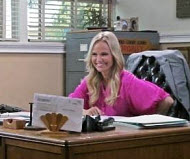 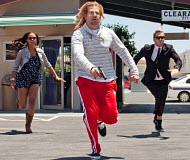 importance of telling loved ones about past problems

“A comedy that never takes it foot off the gas”

Charles Bronson lives in a small central Californian town with his live-in girlfriend Annie. From the beginning of the movie, one may suspect that Charles and Annie are living the dream of being in a small quiet part of California. But that’s not the case in “Hit and Run.” Charles is part of a witness protection program, because he witnessed a violent bank robbery. But after his girlfriend Annie is offered a huge career opportunity in Los Angeles, Charles decides to take a courageous leap by leaving the limits of his small town in order for Annie to fulfill her career; even if it’s against her own will.

Although “Hit and Run” may come off as a film mainly filled with fast-paced action and chase scenes, it is a very vulgar film. The script is marred with nearly 100 f-words, 30 s-words, and nearly a dozen misuses of God’s and Jesus’ names. Other milder profanities are scattered throughout the film, such as a**, b**ch, hell, etc. The violence really doesn’t pick up until about midway through the film, but at times it gets very intense and sometimes bloody. A man is nearly strangled and is dragged brutally by a dog collar, and later another man gets his nose broken with a golf club (blood and all). The car chase scenes may be intense for some, but are mostly bloodless until one character gets shot in the back. There are a few fistfights, and a man is hit with a shovel, as well.

While I found the crude language in this film unnecessary, the sexual content was the worst, in terms of content. The film is filled with crude and at times graphic sexual dialog and contains a sex scene in the very beginning. The audience also gets scarred with not one, but two moments of graphic nudity, when Charles and Annie walk in on a group of elderly people in the nude (we see them from all sorts of angles). Later in the scene, more characters do the same thing, and the audience gets another graphic visual. There are also a couple of homosexual characters and rape and abortion references.

“Hit and Run” contains so many of the same clichés of today’s average action/comedy. It is a shame, because this film really had the potential to be something better. Instead, it contains shaky cinematography, a weak screenplay, flawed direction, and poor acting. The overall tone is on the depressing side, and many jokes just fall flat. The only thing this film has going for it is some originality.

The film does send out a positive message about dealing with problems from your past, and how you can move on with life. The film also discusses the importance of telling your loved ones about the problems you have faced in your past and how these moments could affect a relationship down the road. I found this theme thought-provoking, and it could make for a great discussion, if you decide to view the film.

However, the title for “Hit and Run” should be changed to “Hit and Miss;” this film is a disappointment on both a filmmaking level and a moral level. Marriage is obviously not on the agenda for the two main characters/lovers in the film (Hebrews 13:4), graphic nudity is on display, there’s illegal drug use, and constant foul language, including many graphic sexual references (Psalm 34:13). I just don’t understand how today’s filmmakers think that non-stop cursing, nudity, and vulgar sex references make a great comedy. The language alone gets old in the first half hour of this mess.

“I will not set before my eyes anything that is worthless. I hate the work of those who fall away; it shall not cling to me” (Psalm 101:3—ESV). This verse is a great reminder that we should avoid such worthless films. Despite there being a positive moment of seeking forgiveness and admitting deceitfulness, there just isn’t any good reason to take your time to watch this immoral film. The rating reason should be enough reason for anyone to steer away from this comedy (no pun intended); I strongly urge you to avoid it.

It’s a shame to see modern filmmaking taking a turn for the worst in today’s society, and “Hit and Run” is a perfect example of the worst—both for entertainment and moral purposes. There is so much great talent in Hollywood and so many wonderful stories to be told. But, unfortunately, hard work is wasted on such distasteful films. “Like a muddied spring or a polluted fountain is a righteous man who gives way before the wicked” (Proverbs 25:26).

Negative
Negative—I was hoping for a nice little light, summer comedy, but what I got was a clumsy, decidedly un-funny film produced with the finesse of an 11th grader. With a heavy hand, it preaches Political Correctness about homosexuality, as though addressing an audience from the 1940s. (My brother is gay, as are some close dear friends. I give them the love of Christ. So I am far removed from the term “Homophobic.”) If you’re thinking of seeing this film, to put it quite simply, save your money !
My Ratings: Moral rating: Offensive / Moviemaking quality: 2

Rick Groen, The Globe and Mail
“…An unexpectedly satisfying date-movie spin about a redneck lothario (Shepard) who confronts old demons in order to drive his booksmart g.f. (Kristen Bell) to a big-city job interview, this low-budget B movie looks poised to surprise, potentially rivaling the success Open Road Films enjoyed with ‘The Grey’ earlier this year.”

Peter Debruge, Variety
“…a comedy that feels as if it were dreamed up in the wee hours between bong hits and shots of tequila. … the movie feels like a grown-up version of little boys making whooshing noises and staging collisions while playing with toys on a living room floor. … Desperate for novelty, the story throws in a subplot in which a gay sheriff hooks up with Randy through a Grindr-like smartphone app…”

Stephen Holden, The New York Times
“…A quartet of fully nude (seen from all angles) elderly men and women who appear to be taking a break from a sexual foursome… Over 100 f-words and 30 s-words…”

Bob Hoose, Plugged In
“…misses far more than it hits. Everyone develops an interesting character, and the car chases are audience-satisfying, but it’s difficult for me to enjoy a film that is so profane, so irreverent and so excessively crude. …”

Phil Boatwright, Preview Family Movie and TV Review
“…it’s a lot more fun than the title suggests. How many chase comedies have you seen where the hero’s sexy girlfriend has a doctorate in nonviolent conflict resolution?… the movie is ever so much better than a film titled ‘Hit & Run’ has any right to be…”

John DeFore, The Hollywood Reporter
“‘Hit and Run’ fires on all cylinders… the lead couple has sharp comic timing and radiates chemistry…”