for intense sequences of violence and action, some disturbing images and thematic material. 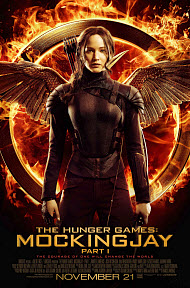 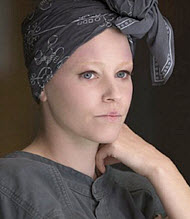 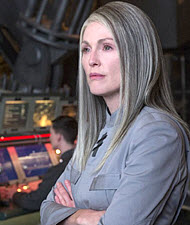 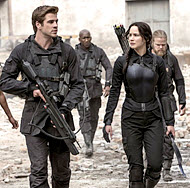 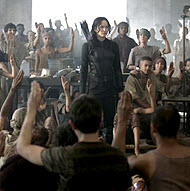 war and its cost—devouring both the unjust and the just

Every human life is valuable. The taking of lives is tragic. 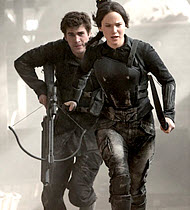 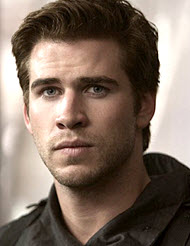 Refuse to give in to evil. Refuse to compromise about what is truly right and good.

RIGHT AND WRONG—Are we living in a moral Stone Age? Answer

Evil governments, and our enemy the Devil, use FEAR to control people. How can we overcome that? 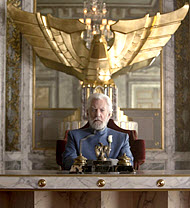 What are the mechanics of totalitarian governments?

society in a repressive and controlled state, under the guise of being utopian

the trilogy’s coming constant battle for freedom against tyranny 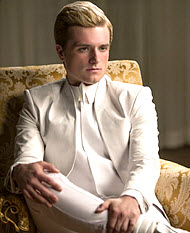 media control and manipulation / What are the ways that media “play” the masses in the favor of those in control?

What is generally wrong with the way celebrity is created in our culture?

Are today’s youth being overexposed to contrived reality on television, leading to a detachment from images of others’ real pain and terror?

Author Suzanne Collins says, “Too much of people’s lives are put on television, and we’re desensitised to actual tragedy unfolding before us.”

the importance of hope

“The courage of one will change the world”

When the first “…Hunger Games” came out, there was much discussion over its theme of kids killing kids, but when I saw the film I saw it was really about government control and about two simple kids who defy the system by loving one another. The second film went further, showing the fragility of governments which thrive on fear and distraction. The film ended with the beginning of a revolution. Now “Mockingjay Part 1” tells the story of that revolution. There is no “Hunger Games” in “Hunger Games III.”

The story begins immediately after the last film where Katnis Everdeen finds out that Peeta, one of her two possible love interest, is captured by the Capitol. Meanwhile, the rebels enlist Katnis as their symbol for the Revolution. She is to be their “Mockingjay”—a bird which has come to represent rebellion and revolution.

They begin making propaganda films and integrating Katnis into the rebels’ camp, but she continues to demand the rescue of Peeta, who many believe is now a traitor, because he, too, has been making propaganda videos… for the Capitol. Eventually. a rescue operation is undertaken to save Peeta and the other Hunger Games winners who were captured.

One good thing about “Mockingjay” is the simple fact that it is based on a book. Most Hollywood scripts are superficial and lack the depth of novels. “Mockingjay” offers intriguing thoughts on politics, love, propaganda, and the simple humanity of people caught up in history. None of the characters are simple. One of the leaders of the revolution is actually a man who suggested that the Capitol double its executions of rebels.

Likewise, Katnis is a reluctant leader. She never wanted to be a leader, which is what makes her right for the job. This is, also, why the film is believable. Whereas most Hollywood script writers would have made Katnis a tough feminist, Suzanne Collins wrote the story of a family girl who is thrust into history. Katnis only wants to live in peace with her family. She has no desire to prove her superiority to anyone.

One intriguing aspect of the film is the role of propaganda and advertising in modern politics and war. I have seen how the Internet has served to divide people politically, rather than bring us together. The media has massive power to sway the masses. A great deal of the film involves the “moves and countermoves” between the rebels and President Snow (the dictator). Much of this involves the pitting of Peeta against Katnis in video messages broadcast to the residents of Panem.

In terms of family friendliness, “Mockingjay” is naturally one which warrants caution. The violence is pervasive, but not bloody. Many skeletons, charred and wounded bodies, and other scenes of violence are seen throughout the film. After all, it is about revolution. However, the most violent scenes involve the results of torture upon Peeta and other rebels. Having said this, the violence is contextual and non-exploitive. In fact, there is a surprising lack of blood in the film, considering the premise. Anyone who has seen the first two films should have a good idea what to expect. In fact, I would hazzard to say that “Mockingjay” is the “least” disturbing of the films, but only in the context that the violence is not perpetuated by children, but by a corrupt government.

There is little in the way of sex, save a kiss. There is even a noticeable shortage of cleavage, as the characters are arrayed for battle, not seduction. There is, however, a scene where one of the characters reveals that he was forced into prostitution by the President. Language is also largely absent. One site reported hearing the s-word, although I missed it.

Overall, “Mockingjay” is a fine film based on a book which speaks to political issues and topics of the day—issues which are becoming all to relevant in the modern world. Like the previous films, “Mockingjay” has a depth lacking in the typical Hollywood script. It is not a happy film, but it is a film of substance. It is not for everyone, but it is a film for those who care about freedom of thought and rebellion against tyranny.

Positive
Positive—You should watch the last episode again, before seeing this, as there is no review, and it takes a while to catch up. Without an actual Hunger Game, this is just another action film about a dystopian future, and Katniss” continual display of PTSD is not entertaining.

Although there is no sex or profanity, the lack of even a hint of prayer in perilous situations will seem odd to a Christian audience. However, the movie is still entertaining, and a must if you’ve seen the first two.
My Ratings: Moral rating: Average / Moviemaking quality: 3½

Brian Schacht, age 68 (Canada)
Positive—I thought this was an excellent movie that taught courage and self sacrifice, despite being a “normal” person. I saw many people willingly give their life to help free others from tyranny, throughout the movie. Although there was violence, it was not “up close and personal,” like the others. It was not gratuitous in any way.

Although God was never referenced, I do believe it teaches good morals. The subject matter is heavy, therefore I would recommend abiding by the PG-13 rating.
My Ratings: Moral rating: Good / Moviemaking quality: 4½

Miranda, age 39 (USA)
Positive—I thought this was one of the better ones. Not sure why it says in the review above that the violence is heavy, because there was hardly any violence (there was so much brutal murder and violence in the first two). There wasn’t much fighting in this one at all. Sure there was death, in the form of lots of dead bodies around from the war, not something I would want a child to see in this movie.

And, yes, it is dark as far as the content, but the acting was really good as well as the story. I was more into this story of this one then even the others because there wasn’t as much outright violence. And there was no sex or nudity, not even cleavage! The subject is interesting because it just makes you wonder if the Illuminati has the “new world order” they are going after, you wonder if something like this is going to be outcome.
My Ratings: Moral rating: Better than Average / Moviemaking quality: 5

Stephanie, age 40 (USA)
Neutral
Neutral—Has an interesting beginning, but near the end was quite boring. There was too much talk and less action. As a believer, I felt that the movie was better than others when it came to morality, as I did not see any nudity or sexual scenes. However, the violence was a lot, and, in some cases, unnecessary. I especially did not like the scene ***SPOILER*** when some of the rebels deliberately had themselves shot at. I felt it made their lives appear to be very cheap.
My Ratings: Moral rating: Better than Average / Moviemaking quality: 3

Kibet, age 34 (Kenya)
Negative
Negative—I feel The Hunger Games: Mockingjay Part 1 makes a sly mockery of current movies audience appetites. The movie was very languorous, mannered, and brimming with carefully coiffed and effete… fops——“heroes” and villains alike. Katniss Everdeen (she should more fittingly be named “Catwalk Everpreen” did nothing for 90% of the movie except swan around in perfect makeup and spotless jumpsuit with an expression of vague melancholia, accompanied by a posse of fawning, but otherwise aimless, poseurs.

Donald Sutherland’s character Snow, perhaps modeled after the swashbuckling Captain Morgan Whiskey pirate, gets more effeminate with each successive hunger games. In this one, all he seems to do is play with his mustache, fondle white roses, and lisp archly. No wonder Sutherland makes no effort anymore to add any depth to his character. He knows he’s part of a sendup.

While the first several Hunger Games had decent extended action, Mockingjay’s most exciting scenes involved the rescue of a cute fluffy cat and Katniss shooting down some obvious CGI fighter jets with a bow and arrow(!!??). One hopes the amazing continued production and popularity of such insipid movie fare does not reflect a general dumbing down in America, but only just too many coke/heroin addled directors in Hollywood coming straight from advertising.
My Ratings: Moral rating: none / Moviemaking quality: 1

David Anacker, age 65 (USA)
Negative—If you think these movies are about an oppressed people fighting against a dictatorship in order to achieve freedom, well you’ve fallen into the trap that is The Hunger Games. I thought that is what these books and movies were about, but by the time I finished reading through the last book, Mockingjay, I realized I had been duped. The Hunger Games series isn’t about freedom, fighting for something you believe in, or even love. It’s really about hopelessness, complete and utter hopelessness.

If the second MockingJay movie follows the book, you will be left in a state of depression, because I believe that is the goal of Susan Collins. The underlying themes she was pushing in her books is that life will only take, war can never have positive out comes, men are pretty much worthless and can never really be trusted or loved, everyone is in it for themselves, the “good guys” are pretty much just are bad and immoral as the “bad guys” etc. etc.

Honestly, there is no happy ending. There is no good morals to walk away with. There is no positive outcome. The overwhelming theme is that there is no goodness in this life, there is only emptiness. Depressing right? Well, that’s what you can expect from the next movie.
My Ratings: Moral rating: Offensive / Moviemaking quality: 3

James, age 29 (USA)
Comments from young people
Positive—I believe Mockingjay is a film capturing the problems in our government. There are many great things about this movie such as, showing freedom, rebellion against tyranny, and standing up for what you believe in like a Christian will do many things to stand up for what we believe in. The actors produce strong feelings showing their real potential.

However, one thing negative about this film is the homosexuality in the costume and makeup in the capitol peoples’ appearance. This affects some viewer opinions. Overall, this is a great movie.
My Ratings: Moral rating: Average / Moviemaking quality: 5