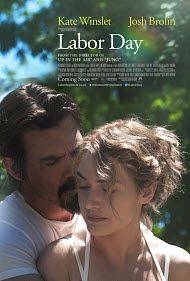 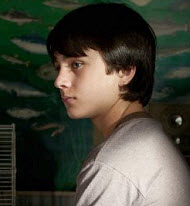 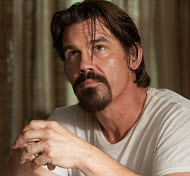 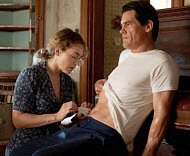 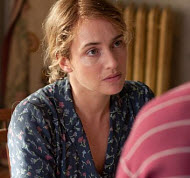 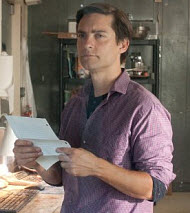 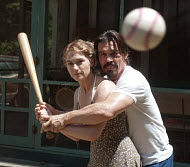 the trauma and ramifications of miscarriages and stillbirths

the illegality of sheltering an escaped, convicted murderer

Take a leap of faith and believe that you will land on your own two feet.

“Nothing misleads people like the truth.” These are the words of Frank (Josh Brolin), an escaped convict that was serving time for murdering his wife. But little do Adele (Kate Winslet) and her son Henry (Gattlin Griffith) know they are letting a wanted murderer into their home over Labor Day weekend. Adele is a woman who suffers with severe depression after going through a miscarriage and divorce. Henry is the only child that she ever had. Only 13 years old, Henry is a kind and compassionate young boy and does whatever he can to lend a helping hand, whether that be to his mom or offering a ride to a stranger.

This is where this coming-of-age story begins. While Henry and his mom are shopping, he meets Frank, who apparently has a severe wound. Frank asks him for a ride, and Henry obliges, although Adele disapproves. After convincing his mom, she reluctantly gives Frank a ride. However, it appears that Frank needs more than just a ride, but somewhere to stay and hide. Adele and Henry bring him home not knowing that he is an escaped convict and do not realize it until later on. Little do they know the kind of impact a wanted murderer will have on their lives.

Although “Labor Day” may appear to be another Nicholas Sparks love story, I found it takes a whole different approach to romance for the better. It is a film about true love, family, and the meaning of friendship. It is a story that deals with fear, depression, and learning to gain the trust of a stranger. However, “Labor Day” is also a film that contains light sexuality, mature themes, and brief violence.

In terms of sexual content, “Labor Day” contains very little, especially for a modern day love story. Adele starts to have “the talk” with Henry, but it cuts short. His father starts to talk with him, as well, but Henry tells him that he’s “up to speed.” A young girl makes a few light references to sex, making out, homosexuality, and incest. In a flashback sequence, a couple is briefly seen kissing, and later shown in bed, clothed, about to begin sex (we see a woman unbuckling a man’s belt and her on top of him). This moment is not graphic and only lasts a few seconds. The couple later gets married and has a child, and the hospital birth scene is later shown (not graphic).

A sexual relationship between Adele and Frank is slightly implied, although we never see them in bed. Henry wonders if they are sleeping together one night while he is lying in bed (we hear very light noises that may just be conversation). We also see a young boy and girl kiss, and Henry has a brief dream involving him and a young girl swimming (we only see bare shoulders). Frank is seen shirtless in one scene, and Adele wears a few low cut tops. An affair is also mentioned.

The violence is brief, but quite sudden and could be disturbing to some viewers. A man accidentally pushes a woman into a radiator ,and we briefly see the impact and her lying dead on the floor. It is also implied that a baby drowned in a bathtub (not seen, but we see an overflowing tub and a man crying in grief). A woman suffers a number of miscarriages, and we see parts of her legs as she sits on a toilet (blood is running down her legs). A woman slaps her handicapped son (could be upsetting for some viewers), and we also briefly see a man’s bloody wound. In a dream sequence, a boy is in a car while being shot at (glass shatters, and it only lasts a few seconds).

The language is mild with only one use of d*mn, s*cks, and an unfortunate abuse of Jesus’ name.

A few characters are briefly seens smoking and drinking. Lying and deceit also play a role in this film. All in all, “Labor Day” is surprisingly good and clean, for the most part.

On a filmmaking note, “Labor Day” is very well done and is a great addition to the romantic drama genre. Director Jason Reitman paces this film well and does a really good job of incorporating flashback sequences. The performances are good and the 80’s setting is well played out. However, I feel that the love story is a little rushed, since the two main characters pretty much fall in love within the first thirty minutes.

“There is no fear in love, but perfect love casts out fear. For fear has to do with punishment, and whoever fears has not been perfected in love” (1 John 4:18 ESV).

The story of “Labor Day” ties in quite well with this verse. Although both Adele and Henry fear Frank in beginning, they get to know him more personally and see who he really is on the inside—a caring, loving, and brokenhearted man who never meant to commit a crime. Through Frank’s kindness, Adele learns what it is like to love again.

We learn that Adele’s husband left her because of her constant depression and miscarriages. He later had an affair and re-married as well. Unfortunately, the only redeeming aspect of his character is when he admits to his son that he should have been by his side more. Proverbs 6:32 says that “He who commits adultery lacks sense; he who does it destroys himself.” We can see that Adele’s husband lacks sense, but we never see him pay the consequences for his sin or at least ask for Adele’s forgiveness. This would have been a great redeeming quality for the film.

All that being said, “Labor Day” is one of the cleanest modern day romance films I have seen. The sexual content is limited, the language mild, and it still sends out some great positive messages about the meaning of family and friendship. It is great to see that director Jason Reitman (“Juno” and “Up in the Air”) took a step back from heavy sexual content and strong language. Although the film still contains some sensuality, mild sexual references, and displays lying and deceit without consequences, I still recommend it for ages 15 and up, depending on maturity. It is not a family film, but definitely a good alternative to most adult entertainment out these days.

“Love is patient and kind; love does not envy or boast; it is not arrogant or rude. It does not insist on its own way; it is not irritable or resentful; it does not rejoice at wrongdoing, but rejoices with the truth. Love bears all things, believes all things, hopes all things, endures all things. Love never ends…” (1 Corinthians 13:4-8a ESV).

Cynthia Hughes, age 54 (USA)
Negative
Negative—When I saw this film’s preview, I thought, “Stockholm syndrome is not a good start to a love story, and involvement with a criminal is a bad thing.” I mostly watched it out of morbid curiosity. Having watched the film, I would add some points to this. The criminal escapee chose his target skillfully, in a way that only a predator would. The female lead wore her vulnerability like a garment, which marked her as easy prey. Then the film morphs into a love story with the criminal doing all sorts of nice and needful things, even while roughly grabbing one of his prisoners at every knock on the door.

***SPOILER*** This is followed by a happy-ever-after, of sorts, which leaves the viewer gratified for the characters (in the context of the film). ***END SPOILER***

The acting and moviemaking qualities are top notch. Both main characters speak to anyone who has the pain of betrayal in their past. Also, anyone with the pain of miscarriage or still birth will feel a tug on their heart strings.

This wrapping in pretty paper is the worst thing about this film. To impressionable or naïve viewers, it sets a destructive example.
My Ratings: Moral rating: Offensive / Moviemaking quality: 5