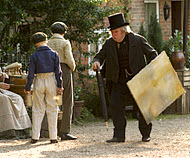 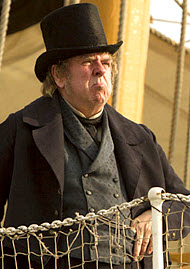 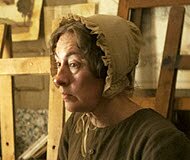 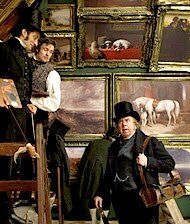 being an outsider in the world in which you work

men who have mistresses and illegitimate children

folly of those who think that when they die, they wil no longer exist and no judgment by God on their actions—no Heaven or Hell

Mike Leigh’s new film, “Mr. Turner”, marks a return to the Victorian England setting of one of the director’s earlier films, “Topsy-Turvy” (1999). I recall a Christian Answers review by Carole McDonnell at the time that spoke about how a large amount of researched information that Leigh put on the screen to reveal the social fabric of the time could be “disorienting and off-putting.” It sure was, and I found myself fidgeting in my seat again as I watched Leigh do the same thing in “Mr. Turner.” But as McDonnell acknowledged in her review of “Topsy-Turvy,” it is well worth the effort to stay engaged with Mr. Leigh’s films. The reward for the time and attention you give “Mr. Turner” is the pleasure of experiencing one of the year’s best films.

J. M. W. Turner was born in England in 1775. He was a successful landscape artist for most of his life. He had ups and downs, and he had his critics—a young Queen Victoria calls one of his pictures “a dirty yellow mess”—but he had a career that was steady, industrious and prosperous, much like the Victorian era itself. He never experienced a downward slide that cursed other great artists in their lifetimes (Caravaggio, Rembrandt, Van Gogh, Pollock), the doomed geniuses to whom filmmakers and playwrights are so often drawn. Turner died in 1851, respected, honored, and rich. In the movie, the last word Turner utters comes at the end of a brief, and enigmatic, sentence. That last word: God.

Turner was referred to as “the painter of light.” He was an artist who was grounded firmly in the Romantic movement, but his use of light, color, and exuberant brush work made him a forerunner of the Impressionist movement that would evolve later in the 19th Century. In the film, Turner paints more the way an Impressionist, or even an Abstract Expressionist, would. The refinement of a Gainsborough or a John Constable won’t be found in Turner’s work. He scrapes, jabs and scratches with a palette knife; he smears and crams his brush into the canvas with a hand that tremors more from exhilaration and anticipation than from anxiety or fatigue;, and he even spits onto his picture as a way to stir up the image set before him.

He painted the world—its lands, its oceans, its skies—the way he saw it, but in portraying its vastness and its grace he was pointing to something beyond nature’s sphere. Turner’s paintings, like all great works of art, are acts of faith that give a hint of the unseen, of something that mortal man can only long for.

An adept draftsman and architect, Turner worked from sketches he drew outdoors (tube paints that allowed the Impressionists to paint directly in outdoor settings had not been developed yet) and reproduced those sketches as oils or watercolors in his studio. Leigh depicts Turner’s Herculean efforts to capture the essence of nature, especially its duality of epic beauty and almost vindictive destructiveness.

In one scene Turner has himself tied to the mast of a ship, not to prevent him from responding to nature the way Ulysses did, but to fully engage him in its power so that he would know that power when he put it on a canvas. When I watched the violent sea spit into his face, I understood why Turner, in turn, spit back onto his unfinished painting of an ocean storm. He understood nature’s potentially violent, and often insulting, power.

Turner is played by British actor Timothy Spall (“Harry Potter and the Goblet of Fire”). The performance won the Best Actor award at this year’s Cannes film festival. Spall’s Turner, despite his preeminence as an artist, is a failure as a Victorian gentleman. Turner refers to himself as a gargoyle; he speaks not in refined, Queen’s English sentences, but in grunts, snorts and snarls. He is more at home gnawing on slivers of a sow’s head than in dipping a spoon into a crafted pudding. The dessert tumbles off his tongue and onto his waistcoat, as he endures an elegant but tiresome dinner at art historian John Ruskin’s house.

My one complaint with the film would be the way that Ruskin is portrayed. I do not understand why such a great art scholar and writer, albeit a somewhat strange individual (is that so rare in an artistic genius?) is portrayed as such a foppish, pedantic ninny. Emma Thompson has recently made a film called “Emmie” about Ruskin, his wife Emmie Gray, and the painter John Everett Millais. I have not seen the film, but I understand that it is another strong critique of Ruskin that emphasizes the peculiarities of his private life, rather than his work that continues to be respected and taught. Ruskin has of late become the Joe McCarthy of art history, and I am surprised that Leigh, an honest and objective filmmaker, would choose to milk that now tired story line.

Turner is an outsider, and he knows it. He accepts his social handicap without ingratiating himself to the people on the inside who admire his genius, but disdain his persona; nor does he rail against society as a masked form of envy or resentment. In true Victorian fashion, he understands his station in life, and he understands the role he is meant to play. Spall emphasizes Turner’s lack of cosmetic attributes in order to reveal a sense of isolation, and to communicate the pain of a person, who, because of a deficit of good looks, is almost always passed over and forgotten.

Spall gives a masterful performance in the kind of role that would usually be carried by a leading man (Charles Laughton in “Rembrandt”, Kirk Douglas in “Lust for Life”, Ed Harris in “Pollock”). Spall, however, does not take the star route. His Turner consists of gray shadows, blurred borders, and perfectly timed bursts of sunlight and color.

The supporting cast—except for Joshua McGuire’s dimwitted and grating performance as John Ruskin—shines, as well. Turner’s most meaningful relationship seems to have been the one he had with his father, William Turner, who is tenderly played by Paul Jesson. William worked as his son’s assistant for most of his life, shopping for pigments, grinding those into pastes, and prepping his son’s canvases with fabric and wax—Leigh makes it a point to reveal the perspiration that goes along with art’s inspiration—as well as serving as his adviser and comforter. Their mutual devotion, as well as the steely determination that seems to be a strong family trait, makes this father-son relationship a compelling part of the story.

Turner was not especially kind to other people, especially to the women in his life. He often turned his back on those closest to him; he did not even attend his younger daughter’s funeral. Sarah, the woman with whom he had the child, rebuked him with contempt: “Go paint your ridiculous shipwrecks.” His ever-faithful and sexually compliant housekeeper, Hannah, gives herself completely to Turner and is devastated when she learns that he has taken up with another mistress, Sophia.

The three women are played respectively by Ruth Sheen, Dorothy Atkinson, and Marion Bailey. Each gives yet another extraordinary performance in a line of mostly unheralded roles that have enriched many a movie and television drama. Dorothy Atkinson, in particular, gives a portrait of quiet devotion and private sorrow. Her Hannah had little use for the man’s fame or wealth. Neither did the other women in his life. Notably, neither did Turner, who refused to sell his private collection of paintings to a wealthy bidder but, instead, bequeathed them to the people of Great Britain.

Each of Turner’s companions saw something in the painter’s character that they valued more than worldly gain. In their response to this oftentimes unkempt, truculent wretch of a man, you can see the man’s measure, and understand his worth. He was the storm at sea; these women were the sunlight reflected in those rough waters, warm currents that calmed a raging ocean.

Absorbing the content and the artistry of a Turner painting takes some time, but once you start looking, it is hard to take your eye off the canvas. Mike Leigh’s “Mr. Turner” works in much the same way. It may start out slowly and a bit too fastidiously, but if you stay with it, you will see a kind of magic emerge—the magic of an artist who reveals a miraculous moment in time, and, in the process, tames an untamed world.

Positive
Positive—This unusual film is a period piece with vignettes centered around the life of English artist JMW Turner. It has exquisite detail of early Victorian England that makes it feel you are living then, exceptional cinematography that resembles Turner’s paintings, impressive acting, particularly by Timothy Spall as the lead, plus supporting actors playing the roles of his father and a number of women in his life.

The film lasts 2½ hours, has no plot development to speak of and little explanation about Turner or any change and development in his art. There has been a large gap between the opinions of critics who loved the film and viewers who found it slow and boring, perhaps reflecting a cultural split where art is the subject.

Turner has the appearance of some vague fat animal (called a chipmunk, a badger or a pig by various reviewers) grunts a lot and articulates little in conversation, but somehow is well accepted in the rich old boy’s network of artists and patrons, where pretentious conversations abound (Turner’s father was originally a barber, but he is a comfortably established artist by the time the film opens).

Turner shares the wealth oriented mores of his era, particularly concerning an impoverished fellow painter who is having hard times, although it is not clear why he has such a prominent role in the film. Near the end, Turner refuses to sell all his paintings to a rich patron, preferring to donate them for the British public. However, for the most part, the kind of moral issues found in many films do not dominate here.

This is mostly a film about art and an artist, more decent than not, dedicated to it. It is in many ways a work of art itself, although, like its subject, it may keep you at arm’s length.
My Ratings: Moral rating: Average / Moviemaking quality: 4½

Stanley Hirtle, age 69 (USA)
Neutral
Neutral—I have good cause to criticise the film “Mr. Turner,” as I am related to Arch-Deacons of London and Berkshire in England, and I have five genuine links to the artist JMW Turner. I am the author of the book TURNER TREES, available at on-line book stores and Kindle, where at least a chapter and a half is dedicated to the artist, including balanced criticism of the film. But I would now like to add a comment about the offensive and unnecessary sex scenes which spoilt the film for my family, and I believe were only included to sell the film.
My Ratings: Moral rating: Offensive / Moviemaking quality: 1