for a scene of risque nudity 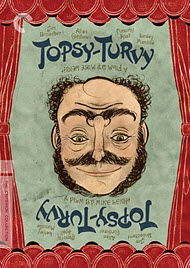 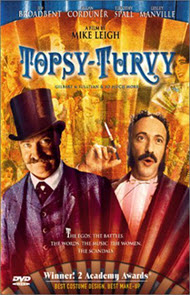 the life of artists

“Clay feet—The egos. The battles. The words. The music. The women. The scandals.”

The first hour of the 2 hr 41 minutes visual feast called “Topsy-Turvy” is a chore. If ever there was a great movie that was not for everyone, this is it. The movie concerns itself with the world of light opera; that is distancing enough for the average viewer. But the writer/director’s insistence on putting every bit of researched information into the film in order to show the Victorian social fabric can be disorienting and off-putting. It meanders and strolls through its tour of Victorian theater folks, specifically the story of two unlikely collaborators, Gilbert and Sullivan. But if the viewer can allow the film’s meanderings, the second half of this period piece will reward the patient with a worthwhile journey.

When the film begins, Sir Arthur Sullivan (Allan Corduner) is feeling the need to spread his artistic wings. He’s tired of his compositions and of his collaborator’s “Topsy-Turvydom” and magical elixirs, magical stones. In short, the age-old problem of artistic differences. But the differences between the two colleagues go much further. Gilbert (Jim Broadbent) is prepossessing, formidable, proper… in short, a true Victorian gentleman. Sir Arthur, another true Victorian gentleman, is a libertine who views risque ditties. And because this is Victorian England, everyone is quite polite and respectful. But these two have signed a joint contract with the Savoy and an opera has to be made. There is no hope until Gilbert goes to a Japanese exhibition and is inspired to write “The Mikado,” arguably the duo’s best-loved work. The film gives us snippets and full-length performances from scenes of many of the collaborators’ operas. If the movie-viewer doesn’t like opera or has no patience with writer/director Mike Leigh’s “social surrealism,” the viewer will feel just as claustrophobic as Sullivan did when faced with his contract.

There have been many movies about the Artistic Life or the lives of those of differing or alternative lifestyles. All too often, these films generally fail to truly communicate to the outsider. Too often the depiction seems self-centered, distancing, smug. John Turturro’s “Illuminata” was like that. As was the gay film, “Lights, Valour, Compassion.” As are many films made by groups, religions, or minorities bent on explaining themselves. How many non-Christians, for instance, really “get” Christian films? Sometimes connecting is hard. Despite its era and its story of the upper-class and the artistic, “Topsy-Turvy” is surprisingly accessible. But Mike Leigh’s works—“Naked”, “Life is Sweet”, and “Secrets and Lies”—all show a humble accessibility in their character studies.

The film is great filmmaking done by an independent filmmaker of quirky films. And yet, it will be offensive for some Christian film-goers. Firstly, Gilbert and Sullivan and the theater troupe are not role models. The artists’ treatment of women leave much to be desired. The theatre troupe’s issues include drug addiction, alcoholism, illegitimacy and abortions. Then as now, the people who give us good wholesome entertainment live lives of shocking cruelty, pain, and depravity. The film’s honest portrayal of these things will bother some people, especially a scene in a bordello. But the film’s depiction of a period long gone whose attitudes and effects nevertheless remains with us today. We Christians use the words bored and boring as readily as non-Christians do. “Topsy-Turvy” requires the viewer to experience a film instead of being mindlessly plot-driven from scene to scene by the Hollywood formula story machine. It’ll be a hard sell to the American public which rates its preacher’s effectiveness on how exciting his sermons are.

Positive
I am very knowledgeable about Gilbert and Sullivan, and absolutely loved this film. I can assure you that not all the research about them was used in “Topsy-Turvy”. I also very much enjoy back-stage stories, and am delighted with the rehearsal scenes, and scenes regarding costuming. Gilbert is a magnificent writer of comedy, and Sullivan a great light opera composer. Most of the film is very accurate about their lives, and Sullivan is my hero, in the way he persevered over the cruel disease from which he suffered.

Boring?—Oh no, and the piano work of Allan Corduner, and singing of the cast are to be commended, too. It is real, unilke most films. My Ratings: [3/5]

Connie, age 75
This is a very rich movie, detailed with information about theater production in late 19th century England. Although the first half hour was difficult to follow, and then came the unfortunate and unnecessary bordello scene, the movie is masterfully constructed and offers fabulous information about Gilbert and Sullivan and what life was like for actors. After the slow start, I thought it was fascinating, and by the end I cared about Gilbert and Sullivan and would like to know more about them. Don’t know how biographically accurate this cinematic account was.

Thought-provoking movie, and only for those who like music, specifically Gilbert and Sullivan tunes, which are beautifully showcased. My Ratings: [3/5]

Halyna Barannik, age 54
A splendid and candid historical recreation of the backstage farce. A lot of fun for history buffs, opera afficanados, lovers of film, and pretty much no one else. Will cure insomnia pretty much on contact, in that respect. My Ratings: [2/4]

Joe Foster, age 21, non-Christian
I loved this movie. Very rich in acting, dialogue and props. So much detail was put in to the time setting (1885) that I felt I visited that era, saw how the people talked and lived, and learned the story of Gilbert and Sullivan along with it. From a Christian perspective, there is one scene I could have done without. That was a brief performance of two topless women who were mostly swinging their arms around and pinching each other on the breast. Other than that the film was absolutely beautiful.

There are touches on drug abuse, alcohol, and abortion, but I thought them all very low key. Much of the film revolves around performances of the opera’s of Gilbert and Sullivan, the rehearsals, and the interaction of the players with each other and with Gilbert and Sullivan.

I agree that this film is not for everyone; the friends I saw it with thought it boring till the last half. I tend to liken it to an old English novel; it’s not an exciting page turner, but when you’re finished you feel that you’ve read something well worth reading and it stays with you. “Topsy Turvy”, I thought, was like that, well worth seeing, one I’d like to see again. My Ratings: [3/5]