for strong sexual content, nudity, language and some drug use. 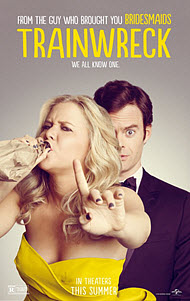 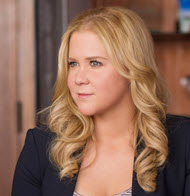 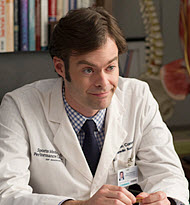 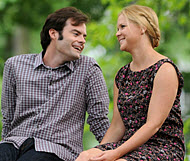 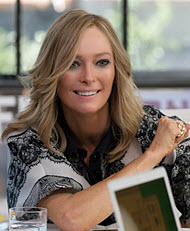 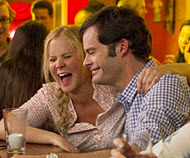 Director Judd Apatow cannot seem to refrain from strong sexual content in his films. However, he always tends to add a little heart to the stories he directs and delivers some form of redemption. “Trainwreck” is one of those films. Meet Amy (Amy Schumer), a magazine journalist who was raised on the worst of morals by her unfaithful father Gordon (Colin Quinn). Amy believes she is living the dream, sleeping around with numbers of guys, drinking, smoking, and partying it up as frequently as possible.

Believing that “monogamy isn’t realistic”, to quote her father, Amy does not see anything wrong with her immoral lifestyle. However, the tide begins to turn when she starts to write an article on Aaron Conners (Bill Hader), a sports doctor. As Amy continues to learn more about both Aaron’s personal life and professional career, she feels mixed emotions that she never really felt before. She and Aaron begin to develop a relationship that teaches them both about the true meaning of love and friendship. This not only helps them bond together as a couple, but also helps them (especially Amy) bond with the ones they are most close to and truly love.

“Trainwreck” is cleverly written by Amy Schumer, has solid performances from its leads, and contains strong direction from director Judd Apatow. However, the script does resort to some unnecessary crude sexual content and dialog that does nothing but mar the heart of the story. The music adds a nice, light tone to the film, as some classic oldie hits fill the background, and, although the story becomes quite emotional at times, the film never refrains from some form of comedic wit to help lighten up the mood.

As a film student, some of the editing and continuity bothered me, as the editing was a little choppy. The story, itself, starts to drag a bit in the middle and at the end. For a two hour comedy, though, the pacing is still very steady and keeps its audience engaged in the personal lives of Amy and Aaron.

It is a shame. “Trainwreck” has so much heart behind its story, but the abhorrent sexual content and strong language distract its viewers and suck them into the immoral Hollywood lifestyle. Amy sleeps around with a number of men and is proud of it, too. There are a handful of sex scenes where we see Amy in bed with different men. One scene contains some graphic sexual movements and another implies oral sex. Rear male nudity is seen on a number of occasions, and another man just barely covers his privates with a towel in one scene.

It must also be noted that Amy attempts to have sex with a sixteen year-old boy while completely drunk. She is not aware that he’s underage and gets caught by the boy’s mom before anything happens. However, the boy does force her to slap (and later punch) him to add some arousal. We see some characters rip off their clothes before sex begins, and Amy in bed with some other men after implied sex. There are a handful of passionate kissing scenes, as well. As expected, there are plenty of crude sexual references, from terms for anatomy to various sex acts. Cheerleaders wear short outfits, and there are also references to homosexuality.

“Flee from sexual immorality. Every other sin a person commits is outside the body, but the sexually immoral person sins against his own body.” —1 Corinthians 6:18 (ESV)

The violence is relatively mild for the exception of seeing some small wounds with blood and a couple of moments in an operating room. Some blood gets sprayed comically, wounds (although not graphic) are seen during a surgical procedure, and a bloody head wound is seen being stitched up. There is also mention of a character committing suicide from taking too much pain medication.

The language is quite strong, as we hear more than 50 f-words and 25 s-words. As mentioned above, there are loads of crude anatomical references to both male and female anatomy, and God’s name is abused close to 20 times, paired with d*mn once or twice. Jesus’ name is abused a couple of times, as well. There are also a handful of uses of milder profanities and vulgarities, including a**, h*ll, d*mn, b*tch, and cr*p.

There is plenty of drug and alcohol content, as characters (especially Amy) drink strong liquor profusely and smoke handfuls of marijuana. References to drugs are also made, including prescription Viagra and Adderall. Cigarettes are also smoked.

A character vomits and another is apparently racist. However, no racial slurs are used.

“Trainwreck” is certainly a wreck when it comes to its displays of an ungodly, immoral lifestyle, but it also has a heart. Sadly, most audiences will not see the subtle moral root to this romantic comedy, due to so much immoral content. Drug and alcohol abuse may be on display, but neither are shown in a positive light. “Wine is a mocker, strong drink a brawler, and whoever is led astray by it is not wise” (Proverbs 20:1). The effects of such abuse are clear, especially when it comes to Amy’s character. Such abuse not only hurts one’s self physically, but emotionally, and Amy realizes the hurt she has caused to so many of those she loves.

Amy later admits that her father did not raise her and her sister properly, but she says that she still loves him with all of her heart despite his faults. As Ephesians 6:2 says, “Honor your father and mother…”

I do not recommend “Trainwreck” for even the most mature audience due to the strong sexual content, vulgar language, and drug abuse. The harmful effects of sexual immorality are not clearly displayed. However, some characters do actually care about Amy’s corrupt lifestyle. One of Amy’s former boyfriends dumps her after she makes her intentions clear that she doesn’t want to settle down and get married. But what really hurts this man is that Amy thinks that it’s okay for her to keep sleeping with various guys, and he with various women. He was hoping for marriage, though, and he leaves her completely distraught. He just wanted one partner, but she wants more.

MARRIAGE—Is formalized marriage becoming obsolete? Some people are convinced that traditional marriages don’t work and that this practice should be abandoned. What does the Bible say about marriage? Answer

Aaron also cares about the number of guys that Amy has slept with and is concerned about her drug addiction. But nearly every character seems to think that premarital sex is completely normal and that crude, profane language is okay to use.

FORNICATION and ADULTERY—What does the Bible say?

Amy may try to redeem herself by film’s end, but it’s only a small step in the right direction. “Trainwreck” tends to make its audience think that Amy did, in fact, reach the light at the end of the tunnel and fully redeem herself. But the film cuts short as she still has a long ways to go on the road to redemption.

“Let no corrupting talk come out of your mouths, but only such as is good for building up, as fits the occasion, that it may give grace to those who hear.” —Ephesians 4:29

What does God’s Word say about goodness and righteousness?

Sin and the Fall of man

Comments below:
Negative
Negative—We were about to walk out during the first five minutes but decided to see if the movie could redeem itself. It did not. A total waste of time and money. Awful in every way and disgusting for the shock value. Hated it.
My Ratings: Moral rating: Extremely Offensive / Moviemaking quality: ½

Janet, age 50 (USA)
Negative—Such a shame to have these talented people, a good story line, solid ending message all tainted by low end, offensive language and scripting. This was a chance to showcase a talented comediane, as well as the storyline message, and, instead, it took the lazy way out with rude, vulgar language, when some clever writing could have had more laughs and be much more palatable and enjoyable.

I am so disappointed thinking so many teens and young people could get some good points from this, but now it’s all couched in reinforcing such crappy language and vulgarity. I see a lot of movies—this is the first time I saw 5 people get up and leave.
My Ratings: Moral rating: Very Offensive / Moviemaking quality: 3

PJP, age 59 (USA)
Negative—The movie was ruined by too many sex scenes, bad language, and nudity. I left the movie after ten or fifteen minutes. I usually read the reviews on movies before I go, but this one I failed to do my home work. As Christians we must preview movies to see if there worth watching or not. We see and hear enough bad things in this world, so I prefer to watch a movie that will uplift me or just be entertaining. I guess that’s why I don’t watch a lot of TV or go to the movies. I hope this helps. God Bless.

Kevin, age 51 (USA)
Movie Critics
…hilarious sex comedy… Schumer’s “Trainwreck” is a trip around the laugh track… shoots 3-pointers from outside the bounds of good taste… [3½/4]

Joe Williams, St. Louis Post-Dispatch
…encapsulates adult Amy’s origin story—how it’s the rationale for why she enthusiastically sleeps around but doesn’t stick around for after-sex spooning, in a welcome contrast to romantic comedy’s usual template for heroines. …[3/5]

Kimberley Jones, The Austin Chronicle
…man, there’s a lot the moviegoer has to travel through to get to that curiously uplifting endpoint. The sex, the drugs, the language … it’s all pretty terrible. …

Paul Asay, Plugged In
…Writer-star Schumer plus director Judd Apatow should equal comedic fireworks, but this rom-com pops only occasionally. …[2½/4]

Rafer Guzmán, Long Island Newsday
…hilarious 4-star ride… “Trainwreck” is a corrective to a lot of outdated clichés. It’s very funny and sweet and even a little weepy, and it has maybe the best scene ever filmed of dirty talk gone wrong. …

Sara Stewart, New York Post
…Amy Schumer shines in raunchy rom-com… wildly funny… The movie's heroine may smoke too much weed, drink too much booze, and have sex with too many men, but the woman who plays her has her act together. Consummately. [3½/4]

Steven Rea, Philadelphia Inquirer
…funny yet insightful… be aware this isn’t some pleasant little rom-com. One of the too many storylines underscores how nasty Amy’s father (Colin Quinn) can be, refusing to call his other daughter’s stepchild a grandson; sexual themes and language may be offensive to some. …