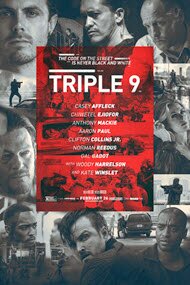 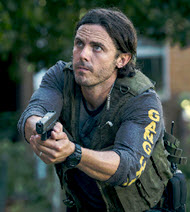 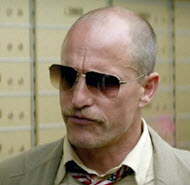 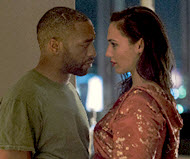 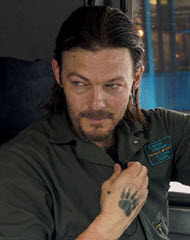 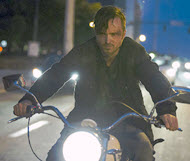 Here’s what the distributor says about their film: “A group of corrupt police officers are blackmailed into pulling off a seemingly impossible heist. They plot the murder of a rookie police officer in order to orchestrate a ‘Code 999,’ police parlance for ‘officer down,’ to divert authorities from their own crime scene across town—their biggest heist yet.”

Katie Walsh, Tribune News Service
…A powerhouse crime drama in which it’s difficult to invest… drenched in a sulfurous atmosphere of corruption and dread…

Todd McCarthy, The Hollywood Reporter
…gets bonus points for some offbeat but successful casting… while Hillcoat has his moves down (tight-knot action, moody atmosphere), the plot gets sketchy, hinging on improbable coincidence, implausible contrivance, and the typecast performance of Aaron Paul… [2½/4]

Steven Rea, Philadelphia Inquirer
…a brutally profane, wincingly violent thriller that pretends to plumb the depths of moral ambiguity even as it unflinchingly assaults us with… doing outrageously bad things.

Adam R. Holz, Plugged In
…cop corruption drama clogged up with guns and explosions… What might have been a smart suspense thriller is overloaded with heavy-duty action, and has a ridiculous turn from Kate Winslet as a Russian mobster… [2/5]

Peter Bradshaw, The Guardian (UK)
…Kate Winslet and Casey Affleck can’t lift unsatisfying ‘Triple 9’… But it certainly has its moments, even if some of them are borrowed from better works… [2/4]

Lou Lumenick, New York Post
…unusually grim, coiled intensity… the film has grit and atmosphere to burn but also a certain narrative sketchiness, as though unable to reconcile its sharp sociological portraiture with the pleasures of a more robustly plotted crime yarn. …

Justin Chang, Variety
…Though compelling in the acting and cinematography, Triple 9’s plot is by the numbers and about nothing. …all-star cast are wasted by plotless film…

Brad Wheeler, The Globe and Mail